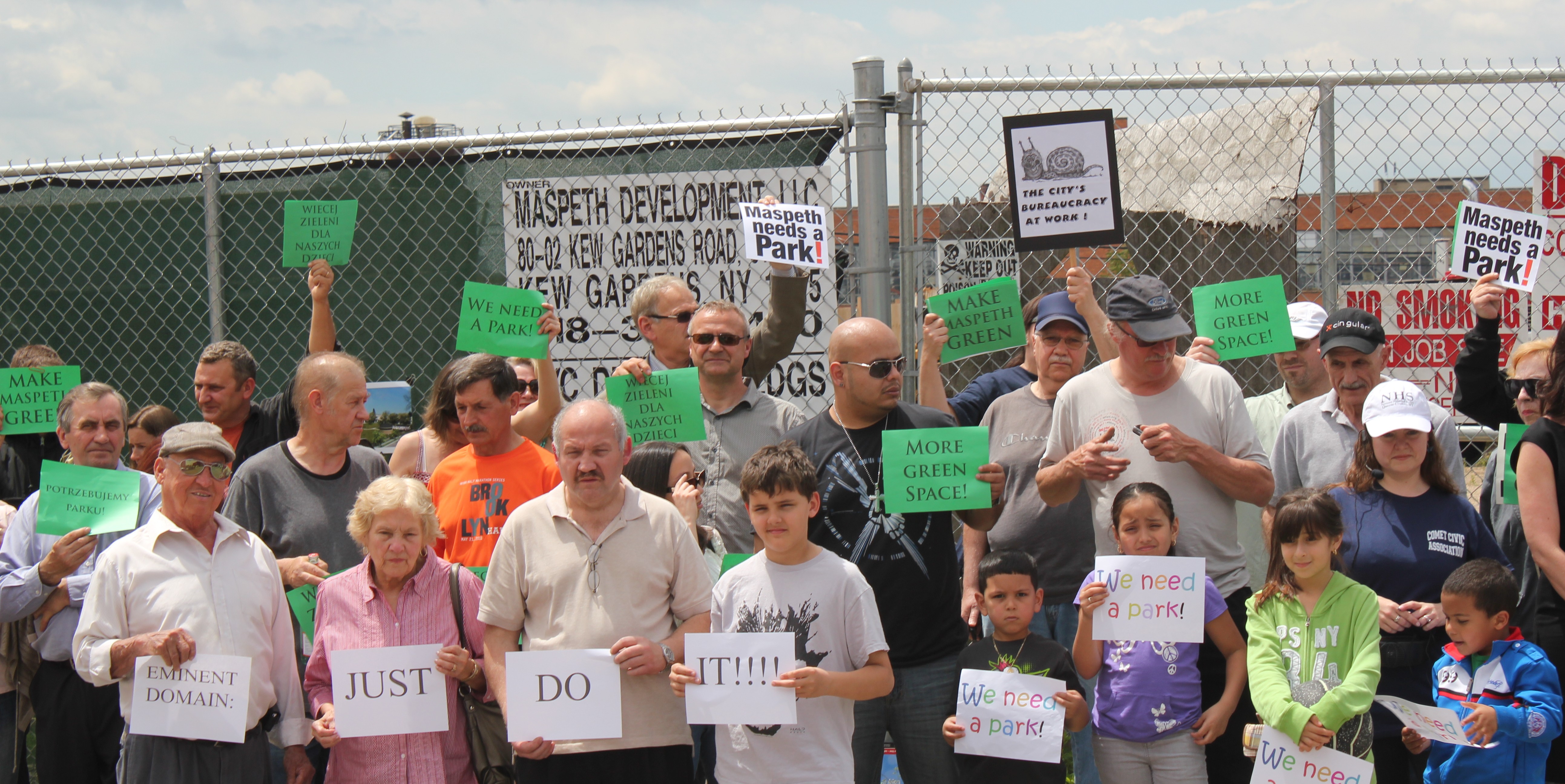 Rosemarie Pittelli and Kay DeVita watched the rally across the street from their homes and grew agitated. More than 80 people had arrived at the corner of 57th Road and 58th Street—the former site of St. Saviour’s church—to demand the city convert the area into a public park. Pitelli and DeVita, who both own homes on 57th Place, want a park in the area, but after years of advocacy that has resulted in little progress, hope was fading.

“We’ve been looking for a park there for years,” Pittelli said. “What are they waiting for? How can we make this happen?”

Community activist Tony Nunziato told the women it was important to keep fighting. Keep calling your elected officials, and if they don’t get it done, vote them out, advised Nunziato, a Maspeth business owner and a former State Assembly candidate.

The saga began in 2006 when Maspeth Development LLC bought the site and submitted plans to demolish St. Saviour’s Church and build homes in the 1.5-acre property. Community activists felt demolishing a historic church, one that has stood in the area since the late 19th century, would be a crime, and immediately mobilized to save the church.

A two-year legal battle ensued between Maspeth Development LLC and the Juniper Park Civic Association, led by President Bob Holden and former board member Christina Wilkinson. Eventually, a compromise was reached, and the church was dismantled and stored by the JPCA with the intent to rebuild the church at All Faiths Cemetery in Middle Village—or better yet, at its original home if the city purchases the land to create a park.

Three years later, there’s been little movement. Councilwoman Elizabeth Crowley (D-Middle Village) and Queens Borough President Helen Marshall allocated $3.5 million to acquire the property, but it falls well short of what the developer is asking for the site. Negotiations with the city and Maspeth Development LLC have been ongoing for more than a year. Currently, Maspeth Development is moving forward with plans to build warehouses on a portion of the property.

Wilkinson, president of the Newtown Historical Society, tired of how the city has kept the project in limbo, organized the rally on Saturday to show that the community is still desperately fighting for a park.

“Unfortunately, instead of a beautiful green space, we have a garbage dump,” Wilkinson said. She said it was shameful that an area that once housed hundreds of trees became a dirt mound filled with trash and debris.

Building a park in the area definitely has political support based on attendance at the rally. Crowley told the crowd “there’s nothing I want more than to get a park at this site.” Councilwoman Karen Koslowitz (D-Forest Hills), whose district doesn’t even include the area, pledged her support and said, “Every community should have a park.” State Assemblyman Andrew Hevesi (D-Forest Hills) said residents and the elected officials have to keep pressure on Mayor Michael Bloomberg and “make this one of his priorities.” State Senator Tony Avella (D-Bayside) promised that this would get done because “no developer is going to win against this community.” State Senator Joe Addabbo (D-Howard Beach) and Councilman Jimmy Van Bramer (D-Sunnyside), through their representatives who attended the rally, promised to continue fighting.

According to Crowley, the city is willing to pay $5 million, the current real estate value, for the property. With $3.5 million set aside for the purchase, plus the possibility of additional funds from the Newtown Creek Mitigation Funds—a state agreement to spend $8 million on green projects around Newtown Creek as the state renovates the Newtown Creek Wastewater Treatment Plant—the city is in a prime position to acquire the land. Except, according to reports, Maspeth Development wants approximately $7 million.

While the activists called Scott Kushnick, the president of Maspeth Development, “greedy,” he has said his hands are tied.

Referencing the myriad of letters from politicians and residents and constant battles to obtain permits, Kushnick told the Queens Chronicle in April “there is somebody behind the scenes who’s trying to cost me as much money as possible. But in reality, it’s having the opposite effect. The more they try to delay me, the less flexibility there is. I had no alternative but to develop. It’s a worst-case scenario for me and the community. The more millions and millions I put into this, the more millions and millions I’m going to need to get from it. I can’t just walk away from the property.”

However, activists at the rally on Saturday weren’t concerned about Kushnick’s financial woes. Over the last two months, Wilkinson has been calling on the city Parks Department to start the Uniformed Land Use Review Procedure (ULURP).

“According to the City Charter, a ULURP must be completed before any monetary transactions can take place. So why has the city been preoccupied with negotiating price without having initiated ULURP, especially knowing full well that title to the property cannot be taken until this lengthy process is finalized,” Wilkinson said in a letter to local newspapers.

Another advantage to the ULURP process is that upon completion, the city can condemn the land, Wilkinson said. Eminent domain is a contentious term, but on Saturday, there were calls for the city to take the land by any means necessary.

“If greedy landlords are not willing to sell, they should condemn the land. Eminent domain should be an important tool in this fight,” Geoffrey Croft, president of the New York City Park Advocates, told the crowd.

Wilkinson said the “blighted” site was ideal for condemnation; Maspeth Development has made the area considerably worse, she said.

For now, the elected officials and the city don’t appear ready to fight for eminent domain. When asked, Crowley said getting the City Council’s Republicans and other Democrats on board to get a three-quarters majority would be difficult. (According to City Council sources, however, most Council Members would vote with the home district’s Council Member in land use issues.)

The Parks Department is also focusing on negotiations rather than eminent domain or the ULURP process. “We can’t buy the land without sufficient funding,” Joshua Laird, Parks Department assistant commissioner, wrote to Wilkinson. “However, by focusing on the city’s ULURP process, you may inadvertently embolden the property owner to hold firm on an asking price that far exceeds the property’s market value. … Please consider that the community and its representatives can most effectively advance our shared cause by encouraging both sides to work toward mutually acceptable terms.”

But after more than a year of stalled negotiations, Wilkinson said she intends to continue her push for eminent domain. “Pressuring the owner to sell is not really an option without that on the table,” she said.

In his position at NYC Park Advocates, Croft has seen many battles regarding parks. “It’s so rare for a community to stand up and fight,” he said. “I don’t want to be standing here in six months when warehouses are here. Eminent domain needs to be used.” Croft added that “thousands and thousands of acres” of city parkland was acquired through eminent domain.