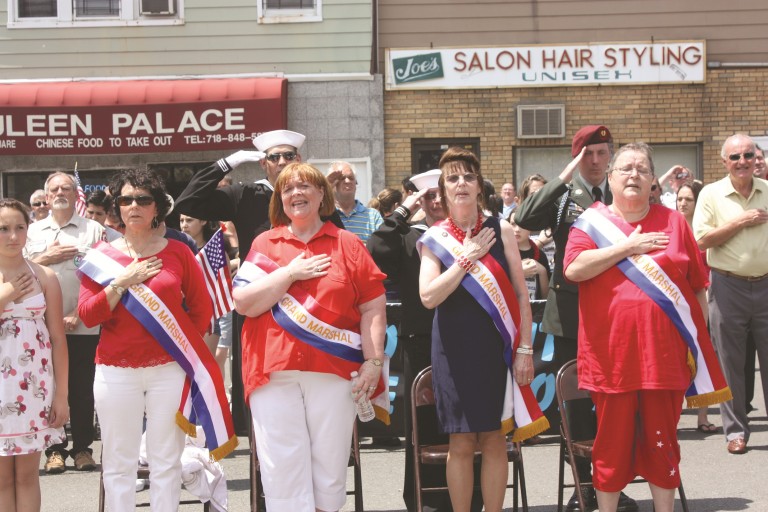 The Howard Beach Memorial Day Parade wound its way through the neighborhood on Monday, with residents lining the parade route as they have for dozens of years.

The parade wound up back at its starting point in Coleman Square for a ceremony to conclude the day. Family members, community groups and dignitaries gathered to place wreaths and lay poppies at the site of the monument that marks the war dead of Howard Beach.

Parade Coordinator Pat Connolly, Commander of the VFW Bernard J. Coleman Post No. 2565, called attention to the names inscribed on the memorial’s walls, honoring the local war dead from WWI, WWII, the Korean War and Vietnam. “Forty-one names on those walls. Forty-one who gave up all of their tomorrows so that we could have today. We can never forget them.”

The parade was highlighted by the four Grand Marshals, all Howard Beach mothers whose sons did repeated tours throughout the world, including Afghanistan and Iraq, and returned home safely.

Honored for the day were Antha Russo, whose son 28-year-old George Russo, serves in the US Marines; Patricia Wagner, whose son Capt. Christopher Wagner, 33, joined the United States Marine Corps after 9-11; Pat McCabe whose son is Sgt. Sean McCabe, U S Army, just returned from a recent tour in Afghanistan; and Karen Amundson whose son Eric, 24, has served with the United States Navy for the last five years and recently completed two combat tours.

For Karen Amundson, the significance of Memorial Day was always heightened by the fact that her mother, Gloria Brew, who passed away at age 82 in 2006, was born on the day. And as if it were not already such a remarkable day for Karen, she says it just about “took my breath away” when her son, 24-year-old Petty Officer Second-Class Eric Amundson, proposed to his girlfriend Melissa in front of an exuberant audience. (see story on page 4) “None of this happiness would be possible without the sacrifices of those we honor here today,” Karen Amundson said.

“The military has been something Eric has loved since he was a child,” the proud mother said. His attention to all things military began when he was a child and a member of the Civil Air Patrol. “The service is wonderful for him. We have watched him mature and seen how grounded and focused he is. My son loves this country and I am prouder than I can say for that.”

In speaking about this Memorial Day in particular, Amundson said it was very hard to explain. “My mother always loved this day—she loved the parade. To be here like this today and to have my son home alive is not a feeling that is explainable.”