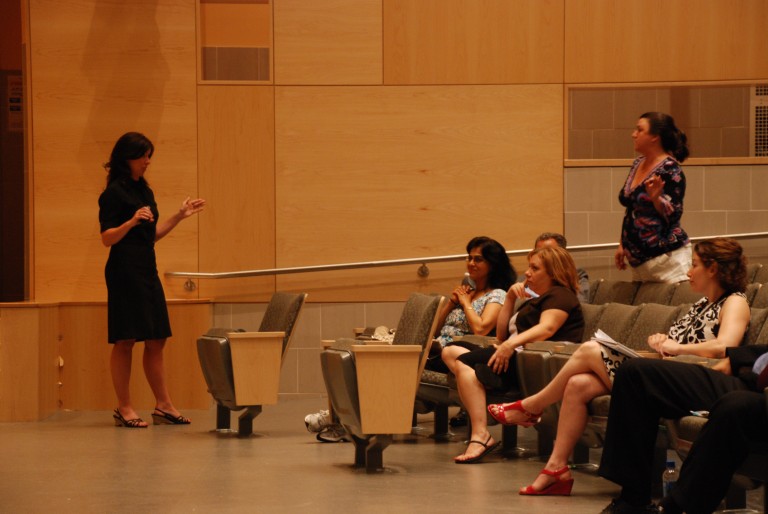 As the New York City public school system awaits teacher layoffs involved in Mayor Michael Bloomberg’s budget, and city services such as firehouses are facing closure, another agency has found it nearly impossible to retain its employees.

According to the Department of Education’s Queens Borough Safety Director Alex Brown, the NYPD School Safety Division is short staffed by as many as 50 agents in Northern Queens alone. They’re leaving for Homeland Security, the TSA and to other cities that can offer better pay and career advancement, he said.

“Graduating classes are coming out slower than officers are quitting,” he said. “This is an unacceptable situation, but it’s one that we are trying to fix.”

During a special Community Education Council meeting held at the campus for districts 24 and 28 on Tuesday, Brown spoke briefly and fielded questions laced with anger and frustration.

“We were told we would have eight security officers when this school opened,” one parent in the audience said. “We don’t even have enough to keep this school safe.”

“I have absolutely no faith that this school will be safe next year,” another added.

Brown said that there is typically one safety officer allocated for every 500 students. Currently, the Metropolitan Campus houses 700 students, and next year it will house the inaugural class of the new Maspeth High School while their own building is under construction.

The Metropolitan Campus Building has six security officers, up from four a month ago. One was out on injury, and another new officer was recently assigned to the school.

Brown said that one of the biggest problems with getting officers to the Metropolitan Campus has been need. Officers are often assigned to schools with high instances of crime, like Grover Cleveland and Bayside, he said.

“There’s very little crime in Queens North, and none in this building,” he said.

Brown also said the amount of cameras in the school works as a high deterrent. With 103 cameras throughout the building, the Metropolitan Campus has more cameras than any other school in New York City. At the school’s two main entrances security guards can monitor up to 20 cameras, but must do so while signing people in, and running security communications.

Despite the high number of cameras, some stairwells and a portion of the building’s third floor do not have cameras installed. According to Dean Johanson, the School Construction Authority’s senior project manager for the Metropolitan Campus, the camera placements were decided by the DOE’s original plan for the high school. He said that responsibility for the cameras were turned over to the DOE, but that the system allows for additional cameras to be added later.

Brown suggested training parents or learning leaders to man the cameras as a volunteer position. “If we can find some kind of middle ground … we’ll maximize our security coverage here,” he said.

One security agent at the CEC meeting said the school could use more officers, but they aren’t necessary.

“We’re managing with what we have,” said the officer.

The SCA also addressed concerns about the building’s completion. Several parents and administrators had complained about incomplete facilities at a CEC meeting in March. Doors lacking handles, inconsistent air conditioning and heat and the camera blind spots were among complaints.

Marci Levy-Maguire, the Queens Metropolitan High School principal, said there was still a lot of work to be done.

“The [repair] list is still pretty long,” she said.

Johanson agreed that the SCA still had their work cut out for them, but said he expected everything to be done over the summer.

“There may be some issues that pop up by September that can’t be fixed,” he said. “But by the beginning of school in the fall, we’ll have repairs made.”

Councilwoman Elizabeth Crowley (D-Middle Village) also expressed concerns about the building’s security and infrastructure, but said there is a bigger issue at the school: under Bloomberg’s teacher layoffs, Metropolitan Campus would lose 35 percent of its staff.

Crowley said the Mayor’s plan to end the controversial Last In, First Out program, which mandates that seniority is the only factor in teacher layoffs, is irresponsible.

“It is ultimately the Mayor who decides how much money the DOE and NYPD have,” she said. “There’s a disadvantage for these new schools because principals have to act like CEOs, they have to find cheaper teachers.”

“Budget cuts are no reason we should have 50 less [security] agents that the schools demand,” she added.