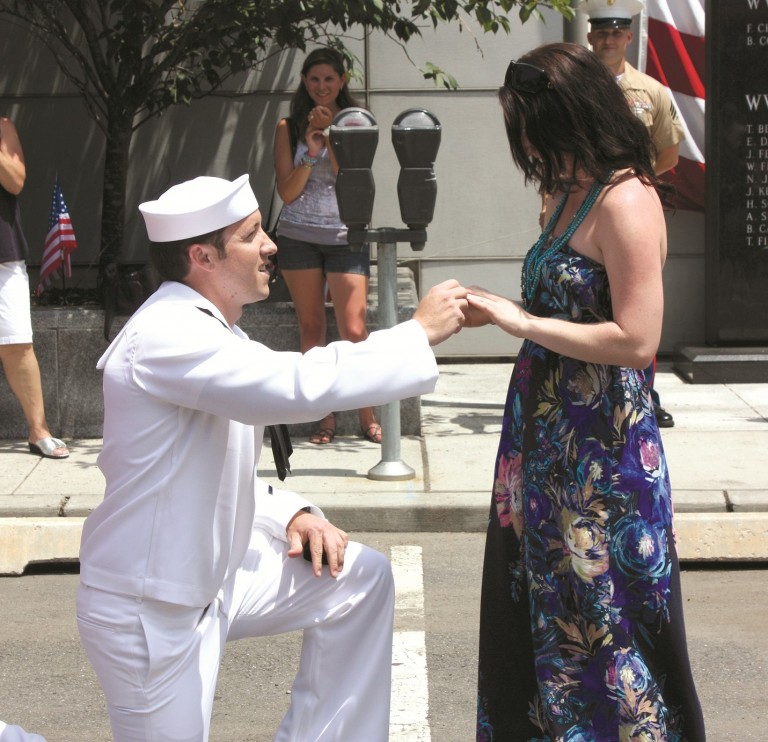 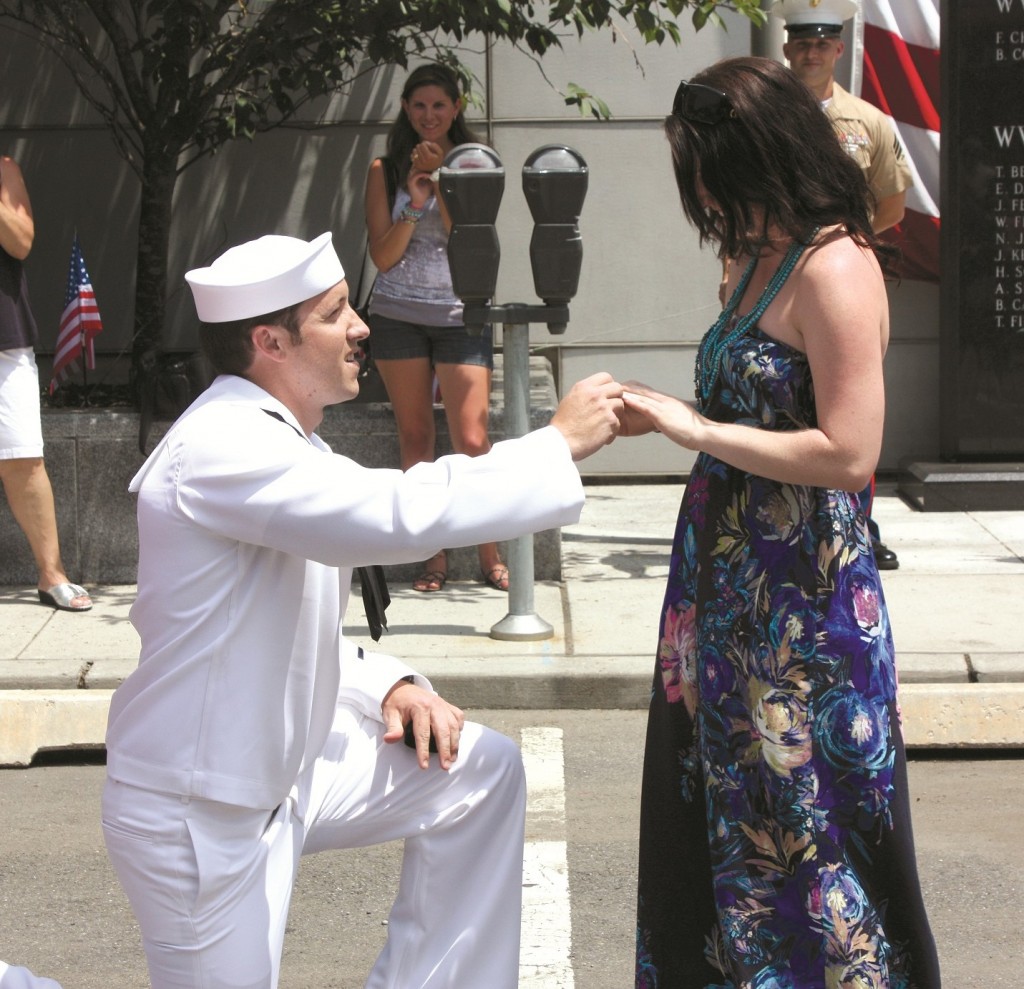 The Memorial Day Parade in Howard Beach has always held a special place in the hearts of residents who turn out year after year to pay their respect to fallen veterans, especially those from the community who lost their lives in service.  But this year was marked by a moment of joyous relief on a usually somber day.

A fairly confident young sailor, in front of a crowd filled with friends, family and strangers proposed to his girlfriend of almost two years, Melissa Queeney. “I kind of knew she would say yes,” Eric Admunoson said with a broad grin, “at least I sure hoped she would.”

Amundson was there with his mother Karen, one of four Howard Beach mothers acting as the Grand Marshals of this year’s parade. They were  chosen because their  sons had served multiple tours abroad and returned safely home. (See story on page 3) The 24-year-old sailor is a Petty Officer Second Class and works in the Naval Special Warfare Group in support of Navy Seal Teams.  He has two combat deployments under his belt with a third soon approaching.

When called on to speak by Commander Pat Connolly, he told the crowd, “I just want you to know that it means so much to all of us [the troops] to have your support and your appreciation.” He reminded those present that while he was lucky enough to come home, some of his friends did not come home yet. Others never will. “Freedom isn’t free and I have friends out there fighting for that freedom right at this moment. Please, please appreciate them.”

In an emotional moment he explained that his tours were not as hard on him as they were on two people in particular, his mother and Melissa. And when he called them to join him front and center, he expressed his love and gratitude to both of them and to his family for all the support he has experienced since his enlistment five years ago. Tears flowed in an obviously moved crowd but Eric Amundson wasn’t quite finished.

“There’s just one more thing,” he said reaching into his pocket.  The words that followed were almost drowned out by the eruption of cheers and applause at the sight of the small black velvet box he now held in an outstretched hand.

On one knee he said the words to Melissa, “Will you marry me?” When the applause and the screams died down, another question was asked. This time from someone in the crowd, “What did she say? And with a grin that couldn’t be measured, Amundson looked back into the crowd, “Yes,” he said. “She said yes.”

The couple is planning a wedding in the summer of 2013 and will make their home in Virginia Beach, where Eric is currently stationed at the Joint Expeditionary Base Little Creek-Fort Story. They met nearly two years ago at a local pub and have been together ever since.

“I was deployed for the first time shortly after we met,” Amundson said. “I knew she was the one for me after she stuck out seven months waiting for me to come home. We had barely gotten to know each other and she waited all that time for me to come home.”  And now after the wait, the 23-year-old who studies fashion marketing will become the newest Mrs. Amundson.

In response to what this day meant to him, Amundson thought for a moment. “To be home with my family and with Melissa is just great. This day is so special to me for so many reasons. It’s my grandmother’s birthday. I am here today because of my grandfather Richard Brew, who was an enlisted man in the Navy and because of 9/11. Most of all, to stand here next to guys like Sean McCabe and the other hometown heroes is just such a privilege for me.”

As far as the future is concerned, Amundson says he and Melissa will try to enjoy all of their days together before his next combat deployment. “It’s tough. We try to make the most of the time that we are home together.  We try very hard not to take that time for granted.”

Amundson promised The Forum another interview as soon as he returns safely home from his next deployment. We’ll be waiting Eric.