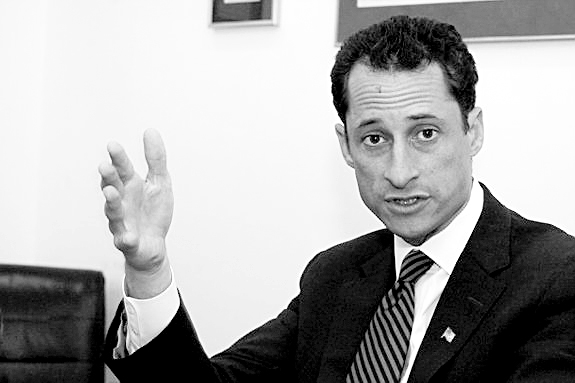 As New York State took a major step toward passing ethics reform laws, the U.S. House of Representatives were considering launching a federal ethics investigation into the conduct of a prominent New York politician, leaving local elected officials dealing with the fallout of yet another colleague’s controversy.

On Monday, Representative Anthony Weiner (D-Queens) admitted to the press and public that for more than three years he has maintained inappropriate online relationships with multiple women.

“I have engaged in several inappropriate conversations conducted over Twitter, Facebook, email and occasionally on the phone with women I had met online,” Weiner said. “I’ve exchanged messages and photos of an explicit nature with about six women over the last three years.”

Weiner, who married Hillary Clinton aide Huma Abedin on July 10, 2010, admitted some of the online relations took place after the wedding. He said he never had any physical relationships with any of the women, and wiped tears as he apologized to his wife, family and staff.

After a lewd photo posted to Weiner’s Twitter account on May 27, he told reporters that it was the work of an online hacker—a prank—but that he could not say with “certitude” that it wasn’t him in the photo. Less than a week later, Meagan Broussard, a 26-year-old Texan, went public with details of their online relationship. She had also received the photo, and much racier photos, in several sex-oriented online chats with Weiner.

According to Broussard, the two also shared a phone call that originated from Weiner’s New York congressional office. Another woman, a Las Vegas blackjack dealer named Lisa Weiss, said Monday that she had once engaged in phone sex with Weiner. She said when she returned the call a recorded message stated it was an outgoing Congressional line only.

After telling reporters on Monday that he was ready to be completely honest, Weiner, as in earlier interviews, backpedaled. “I did not,” he said strongly when asked if he misused government resources. He continued: “My BlackBerry’s not a government BlackBerry. My home computer is usually where I did these things … I don’t have knowledge of every last communication, but I don’t believe that I used any government resources.”

House Democratic Leader Nancy Pelosi, whom Weiner said counseled him to be completely honest, said she was “deeply disappointed and saddened” about the situation. She immediately called for an Ethics Committee investigation to determine whether any official resources were used or “any other violation of House rules occurred.”

Typically, such investigations can take years to complete and there is little remedial action that Congress can take against elected officials for ethics violations. The nature of Weiner’s infidelities also poses a unique problem; while considered inappropriate, online infidelities are not adultery.

“[Politicians] are role models to an extent, and we are held to a higher standard,” said State Senator Joe Addabbo (D-Howard Beach). “But an elected official can go through an investigation and continue to represent their people.”

Weiner said that he welcomes an investigation, and, despite speculation before his press conference that he would resign, stated emphatically that he had no intention of leaving office.

“I am not resigning,” he said. “I have made it clear that I accept responsibility for this. And people who draw conclusions about me are free to do so. I’ve worked for the people of my district for 13 years and in politics for 20 years, and I hope that they see fit to see this in the light that it is, a deeply regrettable mistake.”

Local politicians are divided over how effective the congressman will be as he finishes out his term.

Addabbo declined to comment on Weiner’s case specifically, but said: “If there is anything that removes [elected official’s] focus from the people it is cause for concern. … In the end, if a politician doesn’t resign, it’s up to the voters to decide if they want to reelect them.”

Councilman Eric Ulrich (R-Ozone Park) said Anthony Weiner’s ability to do his job is compromised. “His credibility is severely damaged,” he said. “It would take a lot to repair it. I’m not certain that he is going to be able to carry out his duties moving forward.”

Some politicians are steering clear of any involvement in the case. Assembleyman Andrew Hevesi’s office did not return a request for comment, nor did Councilwoman Elizabeth Crowley’s.

Councilwoman Karen Kozlowitz (D-Forest Hills) decided not to comment beyond a written statement: “I have known Anthony for a long time and know of his dedication and hard work as an elected official.  My thoughts are with him and his family during this very difficult time.”

Assemblyman Mike Miller (D-Woodhaven) said that if it remains a personal matter—if an ethics investigation proves Weiner to have been honest about not using government resources—then he should stay in office. “He can be effective; he’s been effective in the past,” said Miller. “His leadership has benefitted our community. … I’ll be able to work with [Weiner], and I hope we can continue to come up with effective bills that help my district.”

As for Weiner’s constituents, Bob Holden, Middle Village resident and President of the Juniper Park Civic Association, said there isn’t much support left. “I’ve spoken with dozens of people and I haven’t heard one person say that he should stay on,” he said.

“Everybody feels the same way,” Holden added. “They feel they can’t trust him because of the way he handled the situation. It’s another case of an elected official not living up to basic standards.”

Alongside a growing debate over ethics in government, Weiner’s predicament is shining light on dangerous new territory for philandering politicians—online social networks.

One reporter wrote—via Twitter, during Monday’s press conference—that this may be the first political sex scandal in the 21st century that would not have been possible in the 20th century.

To his credit, Weiner, once known for his prolific social media presence, said he’ll be using online tools much differently in the future.