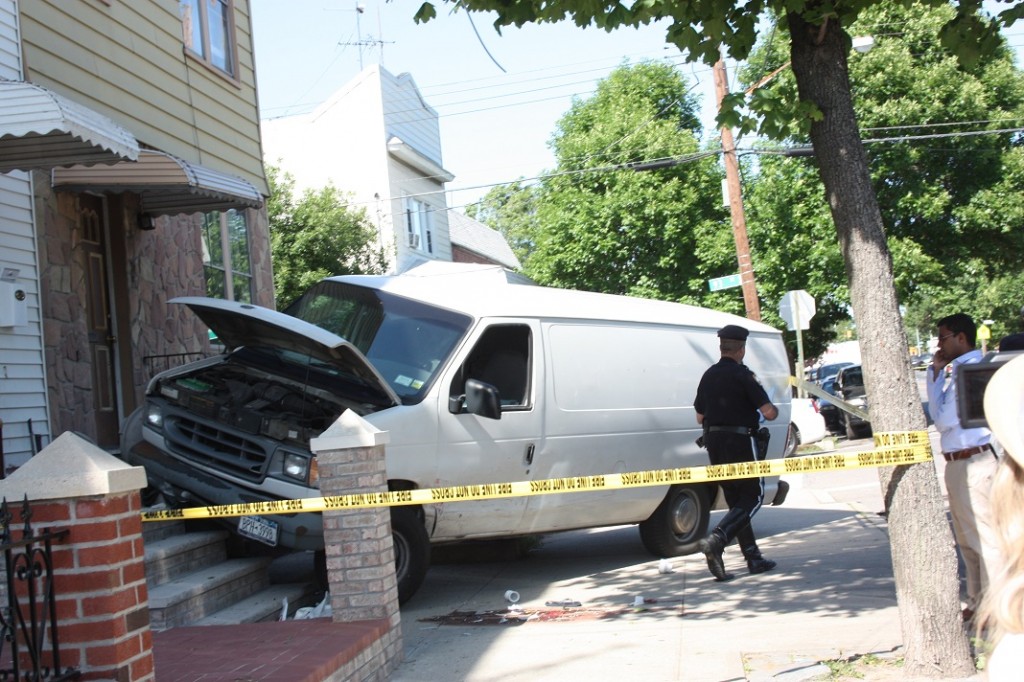 A woman remains in grave condition at Jamaica Hospital after being intent by a van that jumped the curb and drove over the sidewalk into a house on Friday afternoon in Ozone Park.

The 51-year-old woman, was walking on 103rd Avenue near the corner of 93rd Street when a white commercial van lost control after a collision with red mini-van. According to witnesses, the van ran the stop sign at 103rd Avenue at 93rd Street and collided with the minivan, which was travelling north on 93rd Street. The construction van then plowed into the woman before coming to a rest on the front steps of the corner home.

“There were bricks flying everywhere,” said nearby resident David Quintana, adding that the woman was unconscious and lying in a pool of blood. Her black flip-flops remained at the blood-soaked scene hours after she was rushed to the hospital.

Neighbors who gathered along the avenue while police cordoned off the area were upset by the accident, but hardly surprised.

“It has happened before,” said Diane Pari whose family has lived in the corner house for more than 70 years. “The way people speed here and blow through the stop sign, it’s surprising that it hasn’t killed someone yet.”

Pari said that her aunt’s insurance company installed metal bollards last year after a car climbed the curb and drove into the side of the house. In addition, neighbors say there are frequent accidents on the corner because many drivers ignore the four-way stop sign in place.

Other residents echoed Pari’s sentiments. Karen, who did not provide a last name, said the intersection is very dangerous. 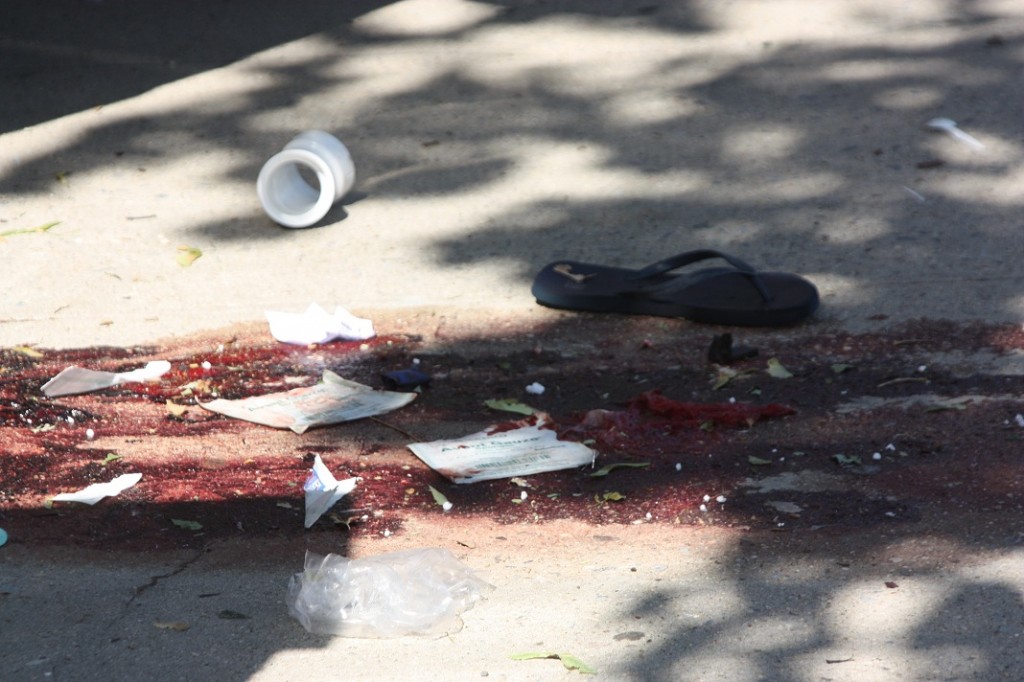 “Someone has to do something here. I cross this street every day to get to work and I really feel at risk,” she told The Forum while watching the police investigation. She said drivers do not stop at the sign completely and some don’t even slow down.

Residents at the scene were outraged that an accident this serious occurred at the corner. John Federo, who has lived in the neighborhood for almost 60 years, says he has been watching collisions and too many near-misses to even count. “They need something here. That woman was crushed. It was
horrible.”

Common perception among those who spoke about the intersection is that a stop light is needed. But area City Councilman Eric Ulrich says the solution lies with a different answer.

“There are stop lights within one block of both directions from this corner. Federal regulations govern where stop lights can be placed,” Ulrich said. “We probably could not get a stop light here with others so close in proximity to this.”

Ulrich said enforcement is the key issue. “What we really need here is greater enforcement. If you want these people to stop blowing the stop signs, stop them when they do it and give them a summons,” said Ulrich. He believes that spreading the word of a ticket barrage at dangerous locations and intersections
would be the most helpful tool at this point to stop reckless driving.

One person involved in Friday’s collision, Frank Mena, who was driving the red minivan, was arrested at the scene for unlicensed operation of a vehicle. Mena was on his way to pick up daughter Amber from M.S. 210 because she had called and said she got sick at school. “I feel so bad,” said Amber. My dad was only driving because I was sick.”

The driver of the white construction van that struck the woman remained at the scene until police said he was free to leave.