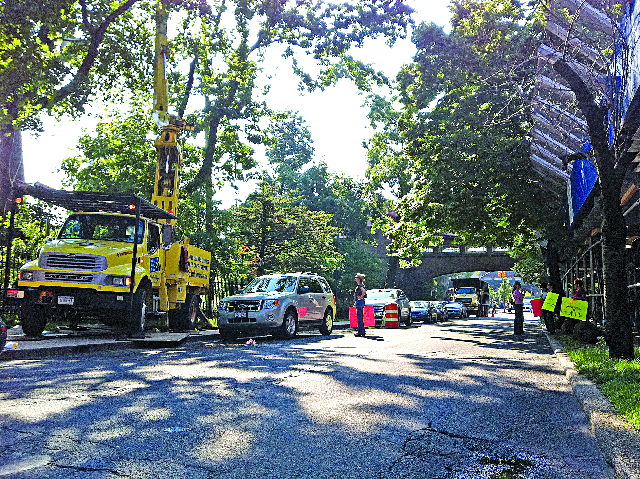 A four year battle over tree removal at the Forest Hills Long Island Rail Road (LIRR) station was reignited over the weekend when residents were surprised to find a crew removing yet another tree.

Residents of Tennis View Apartments on Burns Street began an active campaign in 2007 to stop the LIRR from removing trees along its tracks. The LIRR also removed a concrete wall around the tracks, which residents said acted as a sound barrier for incoming trains.

Russ Gundlach, a resident of Tennis View Apartments, said he was worried about the constant removal of trees from the area.

“As much as the area directly across from our building is of great concern to us, many of the Tennis View residents are active within the community to help preserve and re-green Forest Hills,” Gundlach told The Forum in an e-mail. Gundlach said his neighbors were volunteers at the tree planting event at MacDonald Park in April and the free tree giveaway over the weekend.

“[The tree] was on the railroad side of the fence, close enough to the track where it would easily fall right across the track in a storm,” Arena said.

“Four years ago one of the cherry pickers tore down a large limb from a cerry blossom tree in front of Burns Street, and that tree has subsequently died,” Gundlach said.

As the crew worked, Gundlach and other residents surveyed the work to ensure no other trees were harmed. They also handed out petitions to contact Community Board 6 and elected officials to express their dissatisfaction. He said if the LIRR should start replanting trees in the area and give the community proper notice if a tree must be cut.