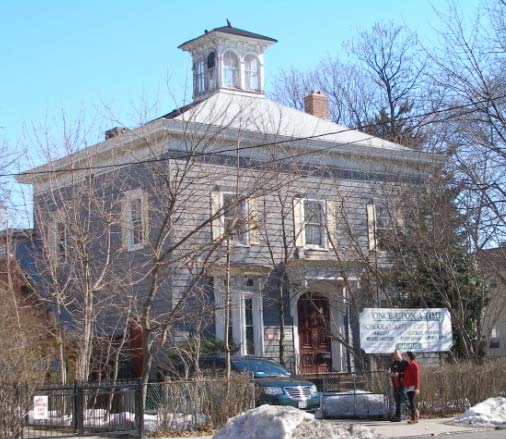 Less than a month after Richmond Hill celebrated the official landmarking of P.S. 66—the first school in Queens to receive the honor—another neighborhood building is on the city Landmark Preservation Commission’s calendar.

The Daniel Eldridge house, an Italianate Victorian house at 87-61 111th Avenue, is under consideration for landmark status as well.

At a June 28 public hearing, several groups and individuals voiced their support for landmarking the house—currently used by “Once Upon A Time,” a small nursery school.

The push to landmark the site, having passed the Landmark Commission’s research department, is now in a public comment period before either being officially designated, or rejected.

Mitchell Grubler, chairman of the Queens Preservation Council, a consortium of historical societies, civic and neighborhood groups that advocate for the protection and preservation of traditional neighborhood character, said he was pleased to see the Landmarks Preservation Commission considering a house in Richmond Hill.

Richmond Hill is “one of Queens’ most historical communities,” yet it is “sorely lacking in landmark protections,” Said Grubler.

“Although the community boasts many historical houses of significance,” he continued, “the Daniel Eldridge House is an extremely rare surviving example of the mid-19th century Italianate style.”

According to Ivan Mrakovcic, of the Richmond Hill Historical Society, the house is exceptional among the numerous landmark-worthy homes in Richmond Hill because of its ornate windows, low-pitched roof and prominent cupola, a windowed tower that serves as an observation deck.

“The fact that it has a particular style to it … gives it a lot of character,” he said. “The combination of its history and street appeal make it a great site for preservation.”

One of the house’s more popular historical tales involves the cupola that makes the architecture so significant, and provides its popular name. Daniel Eldridge, thought to be a part of the Tweed Ring—a notorious group of corrupt politicians that ran New York in the mid-19th century—was said to have watched from the windows as police descended on his home to arrest him for embezzlement.

Eldridge had purchased the land in 1867 for $600 and it was allegedly used as a hangout for the Tweed Ring politicians. After his arrest, it changed hands twice before being occupied by the Steel family, who built a small adjacent home. Since 1974, the property has been used as a kindergarten and nursery school.

Mrakovcic said the candidacy of the building for landmark preservation is a huge milestone for the community. According to Mrakovcic, the building is actually covered with aluminum siding—far from the historical materials used, and a backyard addition to the house is anything but Victorian in style. Nevertheless, the building’s look is convincing from the street, he said.

“The Department of Buildings’s rules are black and white, but the [Landmark Preservation Commission’s] rules are more subjective, fluid,” he said.

If the Daniel Eldridge House does receive landmark status, and Mrakovcic expects it will, it could be a boon for other sites in the neighborhood.

The Historical Districts Council, in a statement of support for the designation, said the consideration is a positive sign for the area.

“HDC is buoyed by the [Commission’s] consideration of this property despite the installation of replacement siding, and hope that this broader view of non-obtrusive architectural alterations is indicative of the possibility of considering other, similar landmarks in the future,” it argued.

The public comment period is expected to last 30 days, and a designation could occur as early as July 28.