While the city’s crime numbers are at record lows, a look at citywide crime data shows some surprising results about neighborhoods and the troubling fact that many categories of violent crimes have increased in the past few years.

DNAinfo.com released its Crime and Safety Report in September, which analyzed the NYPD’s crime statistics for 2010 and ranked neighborhoods for safety. Queens performed well with nine neighborhoods ranking in the city’s 20 safest.

Murray Weiss, a veteran crime reporter for DNAinfo.com, said the report clearly show how much safer the city has become. The biggest success stories were places like Washington Heights and Harlem, once considered to be among the most dangerous neighborhoods in New York, reporting record low numbers of crime.

The safest of part of Queens, according to the report, is Forest Hills and Rego Park, ranking as the sixth safest section in the city. Policed by the 112th Precinct, the two neighborhoods rarely see violent crime. There was one murder in 2010, and rapes were down from 2009 as well. However, according to the latest numbers from the precinct, crime has increased in 2011. Earlier this summer, there was a high profile shooting after a reported argument that left one man dead. There have also been nine rapes reported this year, up from four last year. Robberies and grand larcenies have also seen increases.

At the latest 112th Precinct Community Council Meeting, Deputy Inspector Chris Tamola said residents should be wary of people attempting to grab personal belongings like cell phones in the streets. The precinct is also attempting to install a block watcher program to allow residents to assist police.

The neighborhoods within the 104th precinct—Middle Village, Maspeth, Ridgewood and Glendale—ranked as the 10th safest area in Queens and the 21st safest in the city. The precinct has numerous challenges: there is a large geographical area to patrol, and the neighborhoods are very different from each other. Murders, rapes and auto thefts all increased in 2010.

Auto thefts are a huge problem in Queens. The borough reported the most car thefts in the city last year, with the 104th Precinct the fifth-worst in the city in that area. New commanding officer Captain Michael Cody has said preventing the thefts have been a big priority, and there has been a sizeable decrease this year.

Ranking as the 22nd safest in the city are the neighborhoods within the 102nd Precinct: Woodhaven, Richmond Hill and Kew Gardens. There were several major crime stories in 2010 in the area including the murder of teen Anthony Collao, who was reportedly targeted because his attackers believed he was gay. While most major crime categories fell from 2009 to 2010, the 102nd Precinct reported an increase in auto thefts like most Queens’ precincts.

Crime is rising this year in the 102nd Precinct, which has already matched its 2010 murder total of five and surpassed its rape total. Just last August, a local man allegedly raped a woman walking to work on Jamaica Avenue.

Howard Beach and Ozone Park round up The Forum’s readership area as the 26th safest neighborhoods in the city. The 106th Precinct reported more auto thefts than any other in the city in 2010. (These car thefts were a major reason for the formation of the Lindenwood Alliance last year.) The precinct also saw a jump in robberies.

This year, the auto thefts are down slightly, but grand larcenies and assaults are up. The precinct is significantly down in reported rapes and murders in 2011.

Historical numbers show the city is safer than it’s been in years, but the DNAinfo.com report clearly demonstrates crime is rising.

Queens is an extremely safe borough and continues to get safer, Weiss said. But with four of the seven major crime categories increasing in the city, he understands residents’ concerns.

A dwindling police force could be one of the reasons crime is increasing.

“Hard to deny it, the size of the police gives the Commissioner and Mayor the tools needed to address problems and problem areas,” Weiss said. “The police department has employed tremendous strategies to prevent crime. The issue is, do they have the manpower?” 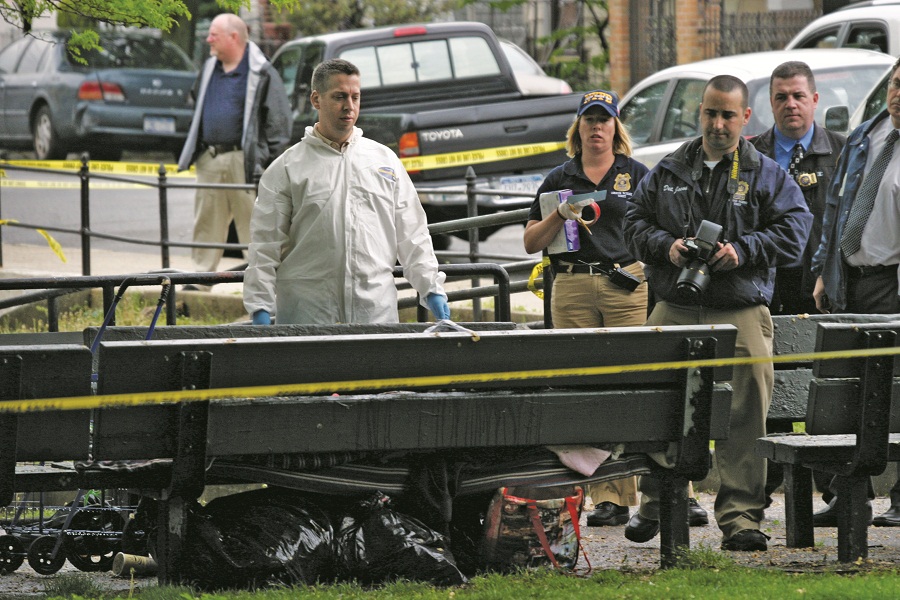 Caption: Police investigate the murder of a homeless woman in Ozone Park last year. Scenes like these are becoming rarer as the city has reached all-time lows in violent crime.