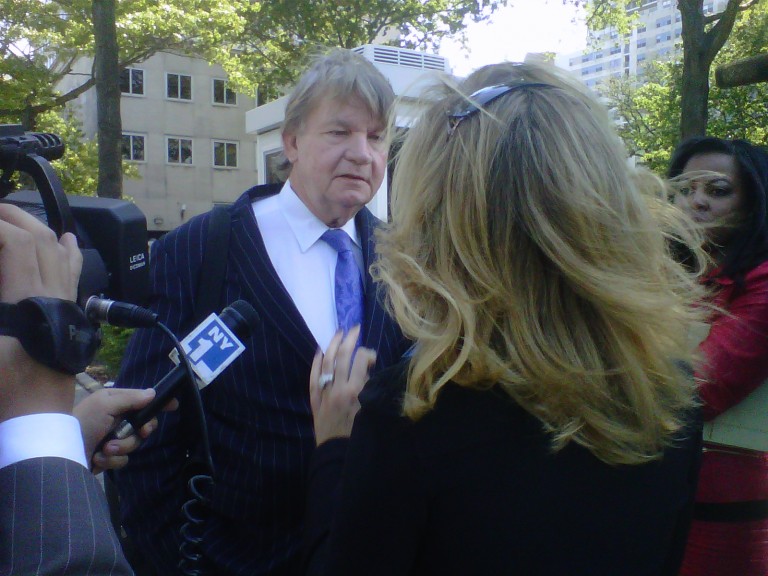 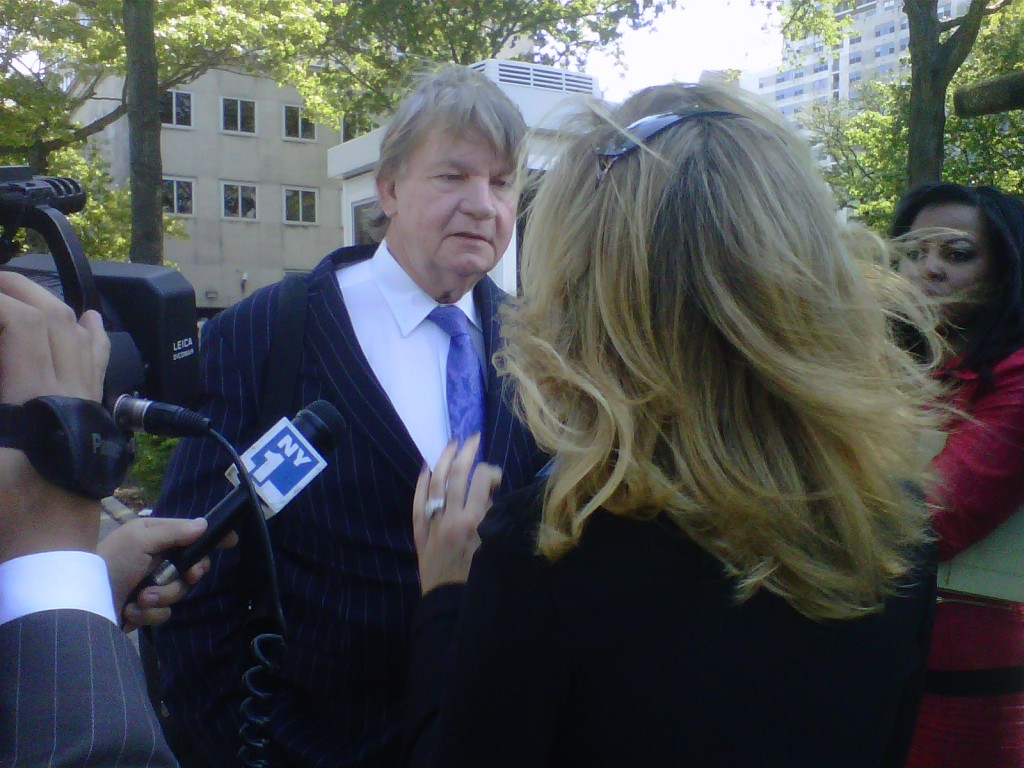 The fate of Barbara Sheehan now rests in the hands of a jury, which as of press time Wednesday remained deadlocked and unable to reach a verdict.

Summations on Monday before a packed courthouse featured defense attorney Michael Dowd painting a harrowing picture of life in the Sheehan house under the rein of terror propegated by Raymond Sheehan on his wife and children.

Dowd reminded the jury that they were the conscience of the community–that it was their responsibility to recognize that not one instance of violence brought to light about Raymond Sheehan was contested by the prosecution.

He spoke about Barbara Sheehan’s children and the ordeal they endured in their home, a life he said was punctuated daily by fear and misery.

Speaking about the Sheehan’s son Raymond, Dowd said, “How terrible for this young man. His soul was torn watching his mother be repeatedly violated.” He described a conversation in which Raymond confided in him that he feared if he hadn’t gone off to college, he might have taken his own life.

The tales of violence and torture did not end with Raymond. His sister, Jennifer, recounted in her extensive testimony the brutality her mother faced at the hands of her father. “If Jennifer didn’t perform well in her gymnastics classes,” Dowd told the jury, “Raymond Sheehan blamed and beat his wife because he had been embarrassed.”

“He could not keep the evil out,” Dowd said of the retired NYPD sergeant. “This man was depraved. He had no regard for the life or the mental well being of anyone.”

The defense attorney continued with his description of what life was like under the “rule” of Raymond Sheehan. He described Sheehan as wanting to have his family appear as being perfect, but at the core of that depiction was Sheehan telling his wife and kids to “put on a smile or you know what’s going to happen.”

Painting a portrait of the Sheehan’s family life, which grew blacker by the minute, Michael Dowd told the jury that his client lived in terror for 18 years. “What must it be like to live with a man, seven years into his retirement from the NYPD, that took his gun into the bathroom every day when he showered.”

Describing what it must have been like for Barbara Sheehan on February 18, 2008, Dowd sketched a scene for the jury. “He threatened to kill her, his gun pointed at her head. How frightening must it be when you think the moment in your life has come that you will live no more?”

And then Michael Dowd told the jury when Barabra Sheehan picked up a gun and shot her husband it was because he was, without a doubt, going to kill her.

Raymond Sheehan slid to the floor but still he screamed at his wife, “I’m going to [expletive] kill you.” Over and over he screamed the same threat. He reached for the gun that had been beside him on the counter, now on the floor beside him. “What kind of a madman screams from the floor with 5 bullet holes in him that he is going to kill her,” asked Dowd.

And after the first shots were fired, when Barbara Sheehan saw a bullet hole in his arm, the reality of what she had done hit her hard. She felt bad. She was going in to help him. But he reached for the gun on the floor to kill her. She got to it first. And then Dowd said, she shot him with that gun until she no longer felt threatened.

“The huge responsibility here is on you to deliberate this case,” Dowd told the jury. “I am asking you for justice and freedom for Barbara Sheehan. It’s something she hasn’t had in 20 years.”

At the conclusion of the defenses summation Judge Kron dismissed the court for lunch before the prosecutors addressed the jury.

“Self defense for a self serving execution,” began the closing remarks by prosecutor Debra Pomedore, who went on to paint an 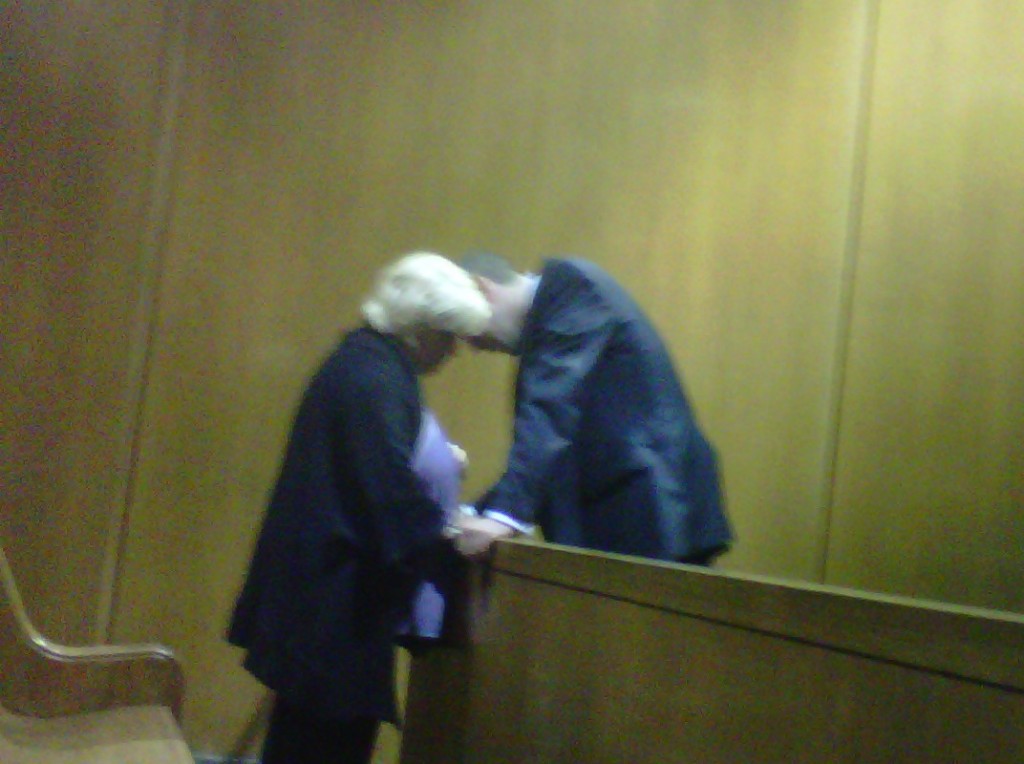 expectedly stark contrast of the events.

“This case is about one thing only. Is Barbara Sheehan guilty of murder?” Pomedore instructed the jury, explaining it was her job to walk them through the testimony offered in the case.

“Barbara Sheehan is guilty of muder with no justification.” Maintaining that the case was not about domestic violence because Sheehan had never filed a single report, made a 911 call or taken any other action to expose what she said her husband was doing to her for almost two decades.

Going over the testimony of witness after witness, Pomedore stayed her course in an attempt to portray Raymond Sheehan as the victim. She flashed photo after photo of the Sheehans on vacation trying to illustrate an enviable family life, filled with luxury vacations, new cars, social events and gifts of jewelery, private schools for their kids and a wedding-like Sweet Sixteen for daughter Jennifer.

She contested the validity of both Sheehan childrens’ testimony, saying she was sure they would “Lay down in front of a locomotive for their mother … Barbara Sheehan has cloaked herself in this cause [domestic violence] and she bastardizes this cause for four million women who deserve more,” said Pomedore.

And as she continued through the summation there was obvious unrest among the family and friends of Barbara Sheehan. At one point, Dowd interjected that Pomedore was accusing the Sheehans of perjury.

Wrapping up her case Pomedore, took the jury to the fateful day of the shooting. She reminded them that Barbara had gotten out of the house after she said her husband threatened to kill her. “She had a safe haven at her friend’s house where she drove to. But she left and went back to the house.”

Pomedore said it was rage and anger that drove the defendant to shoot her husband. “Barbara Sheehan took two guns and fired as many bullets as it took to kill him.”

“You are the keepers of the flame of justice,” Pomedore reminded the jury.

And so on Tuesday afternoon the jury began difficult deliberations in the case breaking around 5 in the afternoon for the day.

Returning to court on Wednesday morning, the jury was brought back into the courtroom after requesting a re-read of Barbara Sheehan’s testimony about the day of the shooting.

Judge Kron then broke the court for lunch. Upon returning the jury forewoman sent a note to Kron informing him that the jury was “hopelessly deadlocked.” When the jury returned to the courtroom Kron counseled them on their responsibiity to use their “human skills and life reasoning ability to help them through the difficult process.

Twice more later in the afternoon they returned with technical questions that arose concerning the definition of the charges and the judge explained how the law applied to their specific inquiry.

Outside the courthouse Michael Dowd spoke to reporters about his feelings.

“You’re talking about a woman who was living in a combat zone. If you think you think you’re going to die, if you see a gun at your head, you don’t see much else.” Dowd suggested that the prosecution has argued essentially every witness was lying. “This is as difficult a time as one can experience. If she gets convicted, she gets a life sentence. And that’s it.”

As of press time on Wednesday afternoon, the Sheehan jury remained deadlocked, with deliberations to continue on Thursday. A unanimous decision by the jury is required to convict or acquit.