With parking a precious commodity throughout the city, it has become customary for residents in some neighborhoods to save parking spots in front of or near their houses with traffic cones or garbage cans. Removing those items and parking in the spot often leads to retribution—slashed tires or smashed windows.

According to sources, spot saving and retribution has become a problem in the Ozone Park area, and the 106th Precinct has begun distributing fliers warning residents against the practice.

Reserving parking spaces on public streets is illegal and the city can issue a summons for the practice.

“It shall be unlawful for any person to reserve or attempt to reserve a parking space, or prevent any vehicle from parking on a public street through his/her presence in the roadway, the use of hand-signals, or by placing any box, can, garbage can, crate, hand-cart, dolly, cones or any other device, including unauthorized pavement, curb or street markings or signs in the roadway,” the flier states.

The flier adds that it is illegal to damage a car parked in a legal parking space.

“We understand that parking is difficult in New York City. We are asking for your cooperation in this manner,” the precinct said.

There is a bill in the City Council that aims to mitigate the issue. Introduced by Council Members Elizabeth Crowley (D-Middle Village) and Letitia James (D-Brooklyn), the proposed law would allow the city to remove garbage cans—the most common method to save spots—left on public streets.

According to Lydon Sleeper, chief of staff for Crowley, the bill was introduced after witnessing problems around the 104th Precinct. Although there are fines for saving spots, he noted, “People were saving spots that weren’t necessarily in front of their house.” This can lead to homeowners receiving tickets for saving a spot, when it was actually their neighbor who planted the garbage cans in front of the house.

Crowley has also looked at different ways to register garbage cans so there is greater accountability to ticket individuals saving spots. 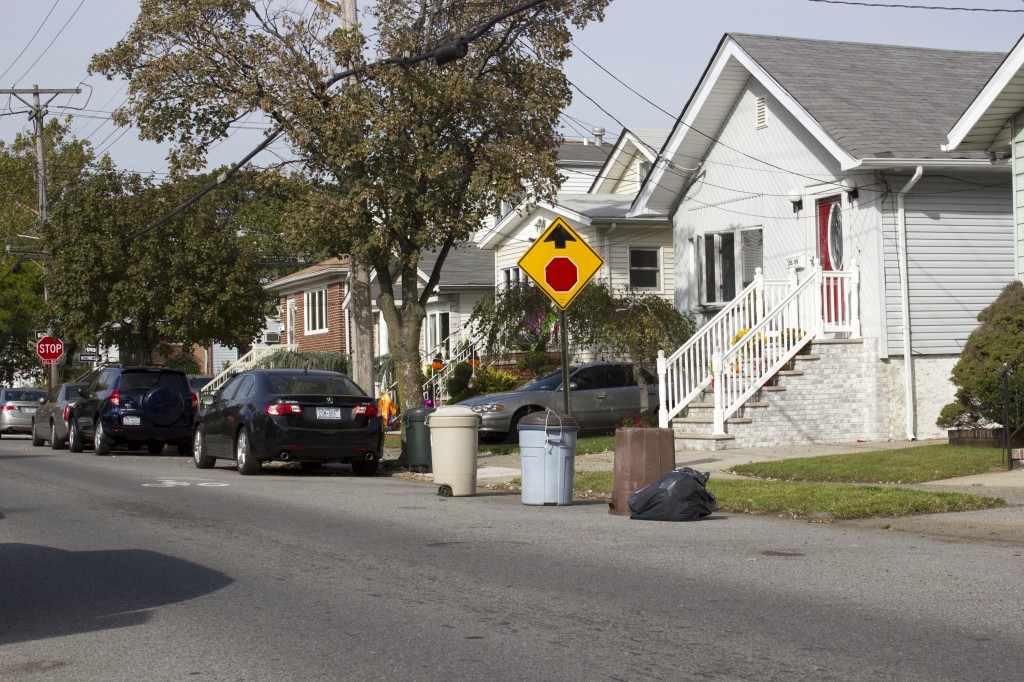 Caption: Illegally saving spots with garbage cans, like this scene on 159th Avenue in Howard Beach, has sparked debate among residents.