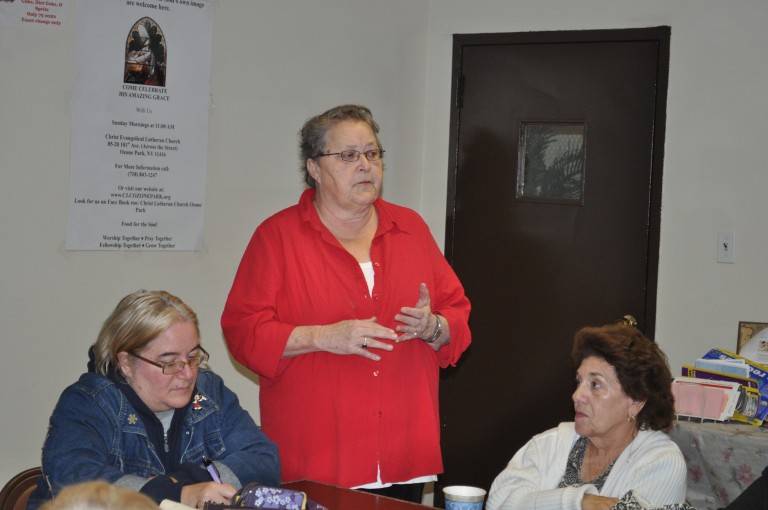 Residents who attended the Our Neighbors Civic Association meeting on last Tuesday night got a primer on the Aqueduct Racino that is expected to open at the end of the month.

Pat McCabe, of State Senator Joe Addabbo’s (D-Howard Beach) office and Betty Braton, Chairwoman of Community Board 10, reported that the 106 Precinct will assign police officers to patrol the neighborhood surrounding the racino when it officially opens.  She said that the precinct didn’t say the exact number of extra police they would dedicate to the area.

According to Kenny Zorn, Community Affairs Officer of the 106 Precinct, they will send additional officers for the precinct for its opening but they will not be permanently assigned there. He said that they will only be there until they can determine the cost for the police force at the Racino. Zorn said that the amount of crime activity in the area will determine how many policeman they will be assigned to patrol the facility.

McCabe also broke down the process after someone is hired to work at the racino.

According to McCabe, after Racino operator Genting agrees to hire someone, they have to go through a licensing process with the state, which includes a criminal background check, a fingerprint check and a drug test. She also said that the company mandates that their employees completes a Gambling Anonymous training session, which will teach them how to look for someone who is excessively gambling and how to offer them help. McCabe added that employees will be trained how to look out

for people who have had too much to drink and how to handle that if things got out of hand.

In order to prevent people from having an inside advantage when gambling, McCabe said that people who live in the same house as a racino employee will not be allowed to gamble at the facility.

“So don’t live in the same house,” McCabe said jokingly.

While, Genting has yet to announce when it will be open for business, it’s expected to announce on October 14th a specific date for the grand opening of the casino.

Newly elected Assemblyman Phil Goldfeder said that he was amazed by the level of professional of the casino after visiting it earlier in the week.

He added that although the racino may bring some problems to the neighborhood as it first opens, it will be overall be beneficial to the area.

“At the end of the day, it’s bringing a tremendous amount of good jobs, respectful jobs to the community,” Goldfeder said. “It’s going to make our district proud.”

The next Our Neighbors Civic Association meeting will be on Tuesday, November 8th at Christ Lutheran Church at 7:30 p.m.