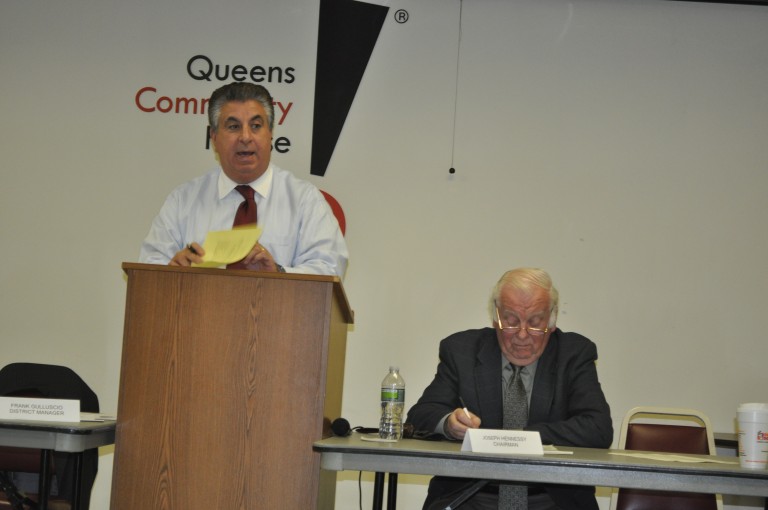 Community Board 6 passed its capital and expense budget, a wish list of numerous projects the board feels need funding to improve the community last Thursday at the Kew Gardens Community Center.

The meeting began on a somber note as Joseph Hennessey, Chairman of Community Board 6, announced that board member Samuel Bloom passed away since their last meeting in September.

Hennessey remembered Bloom, who was a board member for 33 years, as someone who was heavily involved in his community and who has always supported him since he has been chairman. He added that Bloom had been sick for some time, yet he continued to be active in the neighborhood and attended all the community board meetings.

“People like that you don’t meet too often,” Hennessey said.

The board also voted unanimously on the first round of the capital and expense budget that they are requesting to get for next year.

The budgets are a wish list of 10 areas that the board hopes to get money for.  A major request this year is for reconstruction of Queens Boulevard. Hennessey said there is trash all along the boulevard as people neglect to use the litter baskets.

“We said from the beginning that it was going to be a mess and it still is,” he said.

Another item on the wish list is funds to recruit and retain local precinct crossing guards, which Hennessey said that it was important to make sure that every school that’s in the board has enough crossing guards.

“I want that funded so that no school is denied a crossing guard,” Hennessey said.

According to Frank Galluscio, district manager of CB 6, only one school, P.S 206 in Rego Park, is missing a crossing guard but they put it on the items list anyway to keep the guards they already have.

Some of the committees of CB 6 also gave their reports at Thursday’s meeting, including Barbara Stuchinski who is the head of the Parks Committee.

Stuchinski promoted upcoming events that the committee will be involved in, including Park Day, which will be on Saturday, October 15.

There will be two separate groups, one meeting at Macdonald Park at Yellowstone and Queens boulevards and the other at Yellowstone Municipal Park- Katzman playground on Yellowstone and 68th avenues, at 10 a.m. that morning. One group will clean The Painter’s Playground on Alderton Street and the other will work on the Queens Boulevard median.  The CB 6 Parks Committee, along with other groups like Forest Hills Civic Association and New Yorkers for Parks will be involved in the cleanup.

Stuchinski said that although she’s hopeful to have at least 25 people at each spot, she encouraged people at the meeting to lend a helping hand.

“We need a lot of help,” Stuchinski said. “Anyone who has [time], even a half hour, we’d appreciate it if you’d come.”

Community Board 6’s next meeting is on Wednesday, November 9 at the Kew Gardens Community Center at 80-02 Kew Gardens Road at 7:30 p.m.