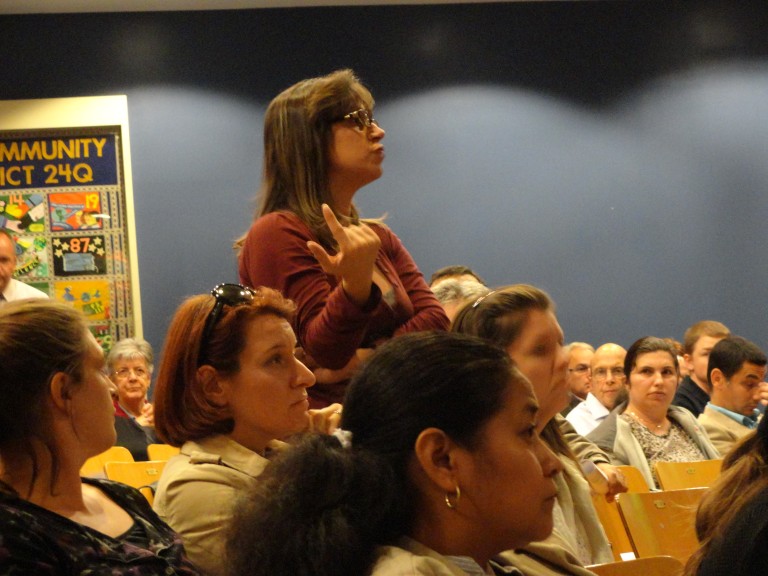 Nearly a hundred residents and parents filled the auditorium of PS 58 Tuesday night to send a loud message to city education officials about the proposed rezoning plan that would affect Middle Village’s PS/IS 49—send it back to the drawing board.

In what could be a precursor to tonight’s Juniper Park Civic Association meeting, Tuesday’s Community Education Council 24 meeting was dominated by complaints from angry parents who argued that the proposed plan to send students living in certain areas of the PS 49 district to other schools was a huge mistake.

The proposed redistricting plan—introduced last month by the Department of Education’s Office of Portfolio Management as a means to alleviate overcrowding at PS/IS 49 –would mean that the northern and southern section of PS/IS 49 ‘s enrollment zone would become zoned for other schools.

While a vote on the redistricting plan was originally scheduled on Tuesday, calls from upset parents and a petition containing approximately 400 signatures opposing the changes to PS/IS 49—launched last month—forced officials to change the date of the voting to Nov. 22.

If a rezoning plan is not passed by the end of next month, the plan will not be able to go into effect next year, meaning that PS/IS 49 will likely continue to face overcrowding issues into the 2012-13 school years.

Linda Schirling, who has a child in pre-kindergarten at PS/IS 49, said Tuesday night that the problem of overcrowding at her school district was not something that could be solved by rezoning the school’s children to other schools. Instead, Schirling argued, school officials should be taking a harder look at children who are admitted to the school, as a large number of them could be admitted through falsified paperwork. “Someone has to do an investigation and find out which students really belong in the district,” she said. “The regulations for proof of residency are too easy. Anyone can falsify a bill and say that they live in the district when they don’t.”

Michael Vanderputten, who moved into the PS 49 district in April, was another parent who opposed the redistricting plan. “I bought my house close to the school so that my children could be closer to it, and now I find out that they might have to go to another school district,” he said. “Then what was the point of moving so close to the school?”

Visnja Marcic, who has a three-year old attending the school, added that the proposed plan “punished people who attend the district legally and rewards the people who don’t.”

Responding to questions from parents about why the rezoning plan needs to happen this year, city analyst Brandi Holton told those in attendance, “We have unfortunately reached the point where (PS/IS 49) cannot accommodate all of the students there, and we are at a point where we have to rezone.”

Bob Holden, president of the JPCA, also spoke out against the plan on Tuesday, stating that more time was needed to create an alternate plan.

The JPCA meeting, where the topic of redistricting will continue, is scheduled at 7:45 today at Our Lady of Hope School, located on Eliot Avenue and 71st Street in Middle Village.