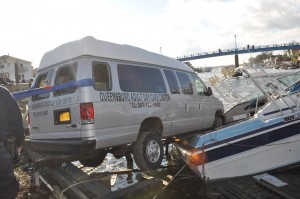 A hit and run fender bender on the Belt Parkway last Thursday morning led to a car chase that ended with a van crashing onto a boat docked at Hawtree Basin in Hamilton Beach.
Victor Azarov drove his van, which belonged to Queensboro Adult Day Care, over the dock at the end of Russell Street after fleeing the scene of an accident, according to The New York Post. Police caught Azarov swimming in the basin after the crash and charged him with reckless endangerment and reckless
driving.
An employee at the Flushing-based day care center told The Forum that Azarov was off-duty the day of the crash. She was unable to provide any other details.
Frank Argento, the owner of the boat that Azarov crashed into, came to the marine after a friend told him about the accident involving his boat.
“My day didn’t start off well,” said Argento, who lives in Glendale and is a member of the Howard Beach Motor Boat Club.
The chase started after Azarov allegedly sideswiped a Chevy Tahoe on the eastbound side of the parkway at Pennsylvania Avenue in Brooklyn and fled the scene of the accident. According to The Post, the driver of the Tahoe called police to tell them what happened after following Azarov for three and a half miles. The chase continued after the men exited the Belt Parkway and raced down residential streets in Howard Beach
and ended when Azarov reached the dead-end street.
The van managed to stay afloat on the boat after the crash and police at the scene had to use heavy duty tow trucks to safely remove it from the water.
Argento wasn’t sure how much in damages the van did to his boat, but he said the cost would be “in the thousands” if he had to buy a new boat.
“You don’t expect to hear a van crashing into a boat,” Argento said.