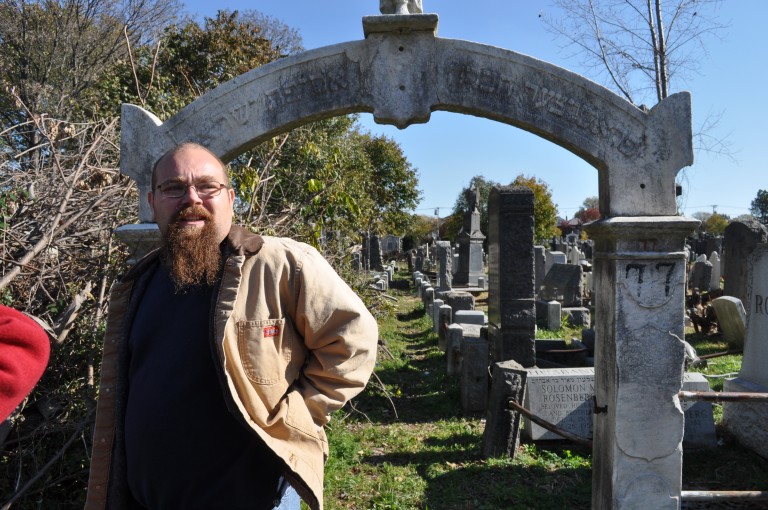 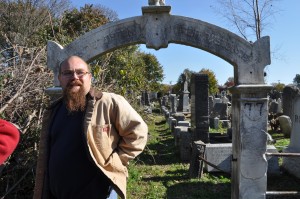 This July, two skeletons were found lying exposed in a vandalized mausoleum at Bayside Cemetery in Ozone Park. They were hard to spot among the cemetery’s general disrepair, but upon inspection, they were clearly visible through holes torn into coffin lids.

When Bronx resident Anthony Pisciotta made a fuss in the media after stumbling upon the bodies, a local undertaker volunteered to re-intern the corpses and the mausoleum was sealed.

Vandalism at Bayside is nothing new. As far back as 50 years ago, newspapers were telling similar stories. It climaxed in 1983 when two men ripped skeletons out of mausoleums, signed their work with racist language and broke through a crypt’s floor to snatch the skull of a young girl and shatter it in the street.

Reports have continually rolled in about new damage or graffiti at the graveyard.

However, a grassroots movement is starting to fix some of the vandalism and general disrepair at the historic Jewish cemetery.

Last Sunday morning, Pisciotta returned to Bayside Cemetery rolling a hand-truck. He picked up about 10 pieces of a shattered white stone bearing the name “Rachel” and started wheeling it 50 yards back to the mausoleum to which it belonged.

“I have no idea how it got all the way over here,” he said.

Pisciotta isn’t affiliated with the cemetery or Congregation Shaare Zedek, which owns it. He doesn’t have family there. He’s not even Jewish. But since July 4, Pisciotta and his son have intermittently come here to upright overturned headstones, repaint rails and make general repairs to gravesites. He said they have done so half a dozen times and don’t plan on stopping.

“It’s a small dent in this big mess out there,” he said about the first plot he cleaned back in July. “It’s not very much, but it’s one family that can go there and at least they can see the stones now.”

Pisciotta is part of a small group of rogue, amateur groundskeepers who have taken on some upkeep of Bayside Cemetery themselves. For the past few years, loosely associated volunteers have started bypassing any larger organization and showing up to Bayside in small groups to mount their own cleanups.

Since 1865, many of the cemetery’s 35,000 graves have been vandalized and gradually neglected. Hundreds of formerly towering headstones are upturned or shattered. Graffiti abounds. A carpet of dead leaves and untrimmed grass covers the entire place. The wrought iron fence around the site is rusted out and topped with razor wire.

Russel Steinthal, an attorney representing Shaare Zedek said maintenance issues built up because the synagogue had sold off the vast majority of plots to burial societies that agreed to care for the land they purchased.

After surviving long enough to bury members at Bayside, however, those societies are now defunct.

Because of the disrepair, two lawsuits are pending against Congregation Shaare Zedek and the Community Association for Jewish At-Risk Cemeteries (CAJAC), which has performed cleanup work at Bayside for about the past two years.

John Lucker is the plaintiff in a case before the New York Supreme Court alleging that Shaare Zedek reneged on perpetual care contracts for graves at the cemetery. He said $5 million to $10 million of trusts set up to maintain the graves is missing.

The New York Daily News in 2007 reported that Steven Axinn, representing Shaare Zedek, said that some of that money had been legally borrowed to repair a roof at the congregation’s synagogue but then repaid. Steinthal insisted that the synagogue’s books are in order.

Lucker said he filed suit partially to prove Shaare Zedek is still on the hook for contin- ued upkeep. “When you buy a burial plot from a cemetery, it’s not a real estate transaction. All [burial societies] bought was a right to use something,” said Lucker, whose grand- parents paid $2 a month to a society for the privilege of being buried at Bayside.

But some people are tired of waiting for a legal resolution.

“I’m all for responsibility, but you can’t get blood from a stone,” said Peter Kaufman, who started volunteering after he rode the A train past Bayside Cemetery. “What are we going to do, just talk about this while the place continues to fall apart and get vandalized?”

Kaufman has trekked to the cemetery about seven times in the past two years to meet groups of five or six people organized by Pisciotta or another unofficial ground- skeeper named Ronnie Herskovits.

The Jewish Brooklyn resident felt like he needed to do something when he rode by the mess.

“I first saw it when I would take the subway to the airport. I was looking out the window and I’d see this thing that looked like a jungle,” Kaufman said.

Now he and his girlfriend will periodically grab a pair of shears and start hacking away at ubiquitous weeds.

“What’s scary is … as bad as it looks now you can’t imagine what it used to look like,” Kaufman said. “We’ve done some small- scale cleaning, but nothing like [Pisciotta has] been able to accomplish.”

Pisciotta and Herskovits have set to cleaning with everything from a chainsaw for out- of-control trees to a sandblaster for graffiti.

Pisciotta has also become something of an unofficial record keeper for Bayside. He’s the man to contact when searching for a deceased relative there.

Jill Levy sought Pisciotta’s help locating her husband’s great grandfather’s grave. She knew her husband’s father rode the train to visit Bayside Cemetery and thought she might find a solid representation of a man whose record she had seen only on a family tree.

“A piece of paper doesn’t mean anything really,” she said.

On the advice of a friend, she came to Pisciotta after getting no burial records from Shaare Zedek.

Pisciotta guided Levy through the dilapidated grounds on Sunday, giving her a tour of the cemetery as they searched. He carried a composition book containing a grave index and notes he’s spent months compiling about the deceased.

His friendly, booming voice hardly stopped: On the left was the headstone of a wealthy man who died on the Titanic; on the right were buried remains of a Holocaust victim retrieved from Europe. There was a smooth rock left by a mourner on one headstone, but nearby there was a beer bottle mimicking its placement.

Pisciotta found the exposed remains in July because he was searching for the relative of a man in Florida who asked for help.

Until then, Pisciotta only had a passing interest in Bayside. In the past 20 years he’s kept an eye on the cemetery. At his previous job, he drove a truck up and down Crossbay Boulevard and had to cut past the graveyard.

He would periodically check media, forums and neighborhood gossip. Now he uses Facebook and blogs to find and recruit anyone interested in helping him fix up the grounds.

He said he watched conditions gradually improve until recently.

“When I first saw it in 1990, you wouldn’t be able to walk here. There would be weeds taller than us,” Pisciotta said.

Walking through the rows of headstones, some stalled work is obvious. Instead of matted threshes of branches and weeds blocking walkways, there are 5-foot-tall piles of decaying branches. Leaves and mulch are still inches thick on the ground, but garbage bags full of them are also placed behind headstones.

Pisciotta credits CAJAC for the major cleanup that made the cemetery walkable. The organization pulled together volunteer groups and funding to do so.

The last group of CAJAC volunteers worked on Bayside in late October, and Andrew Schultz, director of CAJAC, said there’s an- other project scheduled for mid November.

But even if volunteers return the cemetery to pristine conditions, there would be no mechanism in place to ensure continued maintenance.

“Perpetuity is a really long time. And [volunteers] are inevitably not going to be able to do what needs to be done there in perpetuity,” Lucker said. “That’s why there needs to be a permanent mechanism. That’s why my grandparents paid for it.”

Lucker’s solution is to make sure someone is held legally accountable.

His fear is that CAJAC was set up to eventually take control of Bayside — transferring legal responsibility from a congregation with valuable real estate on the Upper West Side to a nonprofit with minimal resources unable to pay out on any judgment.

Members of Shaare Zedek were involved in founding CAJAC in 2006. Schultz said, however, only two former congregation members now sit on the nonprofit’s board of 12 and the organization currently is not capable of taking on the perpetual upkeep at a cemetery.

He emphasized that CAJAC is functioning only as an advisory and volunteer role at Bayside and that it’s just one of the 11 cemeteries CAJAC services.

On Shaare Zedek’s side, Steinthal said the congregation has hired a professional landscaping crew to take care of the cemetery, but there is no funding in place to stop Bayside’s history of disrepair from repeating.

Until a solid resolution is found, the upkeep of the final resting place for thousands of Jewish families is in limbo.

“If we do this without some kind of care in place it will just return to what it was. I’m hoping by making these changes now, we can inspire some people to somehow provide for that permanent care, or maybe that le- gal thing will get sorted out,” Kaufman said. “The alternative is to do nothing.”

In cases like Levy’s, the record of a final resting place is just as hazy as a grave’s future.

She and Pisciotta took one more loop through the grounds after finding plenty of graves marked “Levy” but none belonging to Marcus.

She was about to leave without any hint of why her father-in-law made the trek to the Bayside Cemetery so often.

Ten feet from the main walkway, Levy stopped short and stared. “Oh my God,” She said. “Oh my God, these are cousins.”

She scurried over to read a headstone in a section of about 20 plots. “Fordon Prussia, of course. That’s where my family is from.”

“They’re all cousins,” She said. “This is the whole Levy-Newman family.” 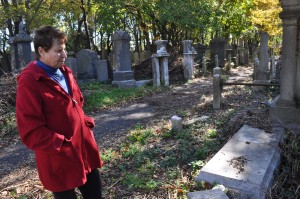