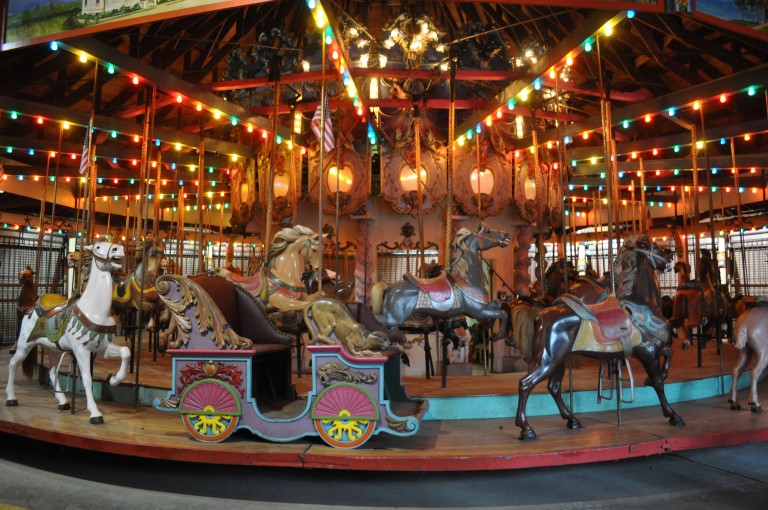 Forest Park Carousel might get a reboot from the company that revamped Coney Island.

Possible bidders including Central Amusement International LLC, which runs Luna Park at Coney Island, toured Forest Park Carousel last week where the Department of Parks and Recreation is asking for operators once again.

The carousel hasn’t run since the city’s contract with the last concessionaire expired in 2008, but on Jan. 12 officials switched on the historic ride to give bidders and residents a rare look at the hand-carved animals in motion.

Parks wants the new operator to run the adjacent concessions stand—allowed to serve beer and wine—and is offering the chance to install children’s rides down the hill toward the Woodhaven Boulevard entrance of Forest Park.

George cautioned potential bidders, though, that they would not be allowed to relocate or damage any trees that pepper the area designated for additional rides.

The Parks Department may have succeeded in generating more interest at least preliminarily. New Jersey–based Central Amusement International (CAI), which helped build and design Luna Park, took a close look at the ride.

CAI’s president, Valerio Ferrari, was on hand and complimented the carousel and its handcrafted design during the inspection.

“They’re pretty unique. You don’t find them around anymore,” said Ferrari, who alluded to a future interest in the site. “I’m not very knowledgeable on the carousel—yet.”

He and other bidders were dubious about the carousel’s aging engine, saying it needs an immediate upgrade.

A winning bidder would be responsible for all repairs, refurbishments and operating expenses. They would also hand over a portion of any gross income to the city.

The previous contract required the operator to hand over 10 percent of gross income to the city, which would have been less than $7,500 each year, but there was also a minimum annual fee to Parks in place, requiring $15,000 in the first two years, $17,500 in the second two years and $20,000 in the final year.

George said part of the problem is carousel operators have only been able to consistently charge between $2 and $2.50 for tickets, which is why Parks made an effort to include more chances for revenue in this request for proposals.

Bidders will have to decide how much they can offer Parks in fees and remain viable when they submit their proposals.

Parks is also encouraging prospective operators to include outreach to residents. About half a dozen onlookers attended the tour along with possible bidders, showing there is at least some local interest in the site.

As Woodhaven resident Nancy Wagner watched the carousel’s animals bob past her, she said it’s been frustrating to see the attraction languish and hopes someone will make a viable run.

Forest Park Carousel is one of only five operating in New York City, but it is the only one with figures carved by the deceased master wood carver Daniel Carl Muller.

The original Forest Park Carousel opened in 1903, but it burned down in 1966 before being replaced with the Muller creation there today.

Woodhaven residents have pushed to landmark the carousel. And organizations such as the Woodhaven Residents’ Block Association—whose president, Ed Wendell, was on hand—made it clear to bidders that the ride is held in high esteem by the community.

“If we do something, we will do it in the most respectful environment of the carousel itself,” Ferrari said about his company’s possible proposal.

Bids to run the two carousels are due on Jan. 27 by 3 p.m., and would cover a 15-year term. The contract with Flushing Meadows–Corona Park carousel’s current operator expires in March.