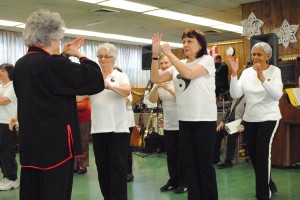 Where do you find tango dancing, a tai chi demonstration, stand-up comedy, poetry and live music at the same time?

Nearly 100 seniors from around Howard Beach packed the Howard Beach Senior Center on Monday to watch their fellow seniors sing, dance and even make romance at the show.

The romance parts came when Gil Yarbon, who performed a comedy routine earlier, switched gears later on to perform a love ballad, which he dedicated to his wife. Before then, the audience was treated to local senior Tom Riviello performing Enamorada—Italian for ‘lover’—as part of a packed show that featured multiple acts and talents from local seniors who frequent the center.

Muriel Stemann, another senior, had the crowd laughing as she recalled several anecdotes from her life in a segment titled ‘Tales of My Family.’

Mark Frey, executive director of the Howard Beach Senior Center, said afterward that he was pleased with the full house that showed up for the event despite the chilly January weather.

“For a little while, we were afraid that we weren’t going to get a lot of people showing up because of the cold,” he said. “But this is as lively a crowd as I’ve seen yet.”

Frey even got into the act himself, performing The Beatles’ classic hit ‘Let It Be.’

Tessie Costa had the crowd on their feet when she performed St. James Infirmary Blues from Cab Calloway. Costa said after her performance that the annual show is something that seniors look forward to every year.

“It’s something that everyone loves to see, and it’s always a lot of fun,” she said.

As he looked out into the crowd, Frey estimated that approximately 85 percent of the room were seniors who often frequent the center on 84th Street. The show, which was free of charge and paid for out of the center’s annual budget, is important in bringing senior citizens together and keeping them in an active—and happy— state of mind, he added.

Many of the dances and talents performed, including tango and a tai chi demonstration, are held in classes held at the center throughout the month.

However, as the senior center has struggled to make ends meet in recent years, Frey added, it is with the support of the community that programs such as the talent show are made possible.

“We always encourage donations,” he said. “The nice thing about the way they do it is that everyone does something a little different, so it kind of creates this…show that stands out through the years.”