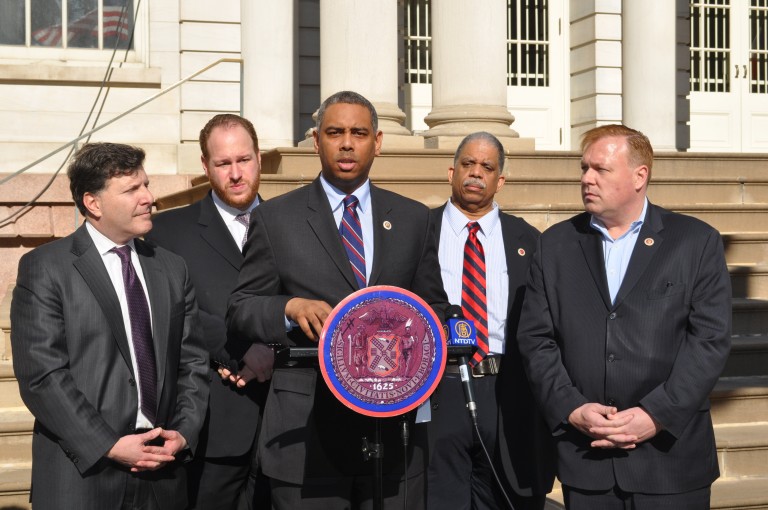 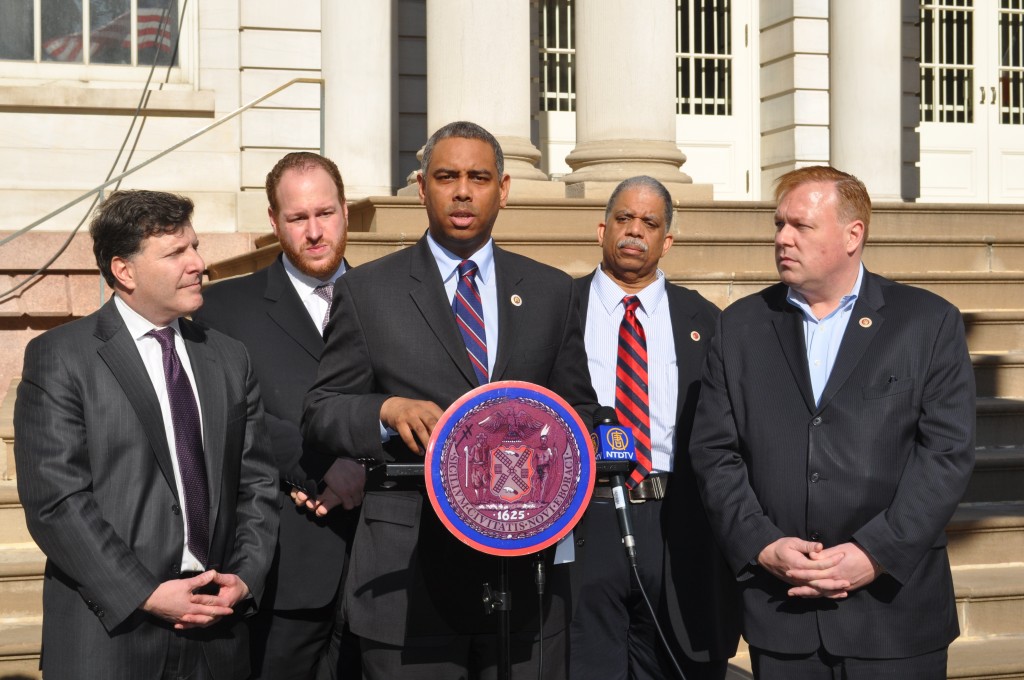 Addressing an increasing problem among their residents, several council members demanded an investigation into a water meter system that they say has incorrectly billed thousands of dollars in water bills.

Councilman David Greenfield (D-Brooklyn), along with four Queens council members, held a press conference at City Hall on Monday, Feb. 27 asking the Department of Environmental Protection (DEP) to look into the automated meter readers (AMRs) because people have complained that they received bills double or triple the amount they were before the meters were installed three years ago.

Greenfield said that when the city installed the AMRs, it assured everyone that it would have accurate quarter water meter readings. But after hearing several people complain about their spiked water bills, he said that isn’t true.

“In many of these cases, we believe that these automated meter readers are broken and that they’re overcharging,” Greenfield said.

Councilman Leroy Comrie (D-St. Albans), who is the head of the city council’s land use committee and was at the press conference, echoed Greenfield’s sentiment saying that people are very frustrated with the high bills and that the DEP needs to come out and check and test the meters in addition to checking for water leaks in someone’s home after a complaint is filed.

“Clearly, there have been problems with these meters for many years and we have a lot of homeowners who would rather just pay then fight the system,” Comrie said.  In addition, he said that they want to give people an opportunity to complain about the meter and the bill instead of paying the high fees.

One Richmond Hill business owner has also received high water bills since the AMR was installed.

George Russo, who runs a law practice in the building he owns on Lefferts Boulevard, has been trying to fight a $4,022 water bill he got in the first quarter of 2010.

According to Russo, his water usage was usually around 5,000 cubic feet of water per quarter, which came out to about $700.

But after DEP installed the water meter in the beginning of 2010, Russo saw his water usage immediately multiply by 12 in the next quarter, though the bill went back down to the usual level in the quarter following that.

When Russo called to ask why his bill was extremely high, they told him to file a formal challenge.  He did so, twice, and still hadn’t gotten it resolved. Russo eventually got a letter back from DEP denying his appeal, saying that they checked the meter and it’s fully functional. He has continued to pay his water bills except for the $4,022 notice.

At the press conference, Mordechai Lev, a Brooklyn resident who lives in Greenfield’s district, said he has also seen a tremendous spike in his water bill since the AMR installation.

Lev said that he doesn’t understand why he’s getting this high bill, despite his water use not increasing.

“There’s definitely something faulty here,” he said. “Because my water use hasn’t changed, if anything, it’s gone down.”

Lev also disputed the bill and the DEP wouldn’t give him a discount. He said that he has continued to receive higher bills of $1,500 and $1,800 after the initial bill.

Farrell Sklerov, a representative from DEP, said the meter readers have been providing accurate data and that the DEP have seen no significant change in bill disputes since the meters were installed in 2009.

But as more people continue to see their bills go up and down, Greenfield said that he wants the DEP to investigate the city’s water meters.

“We’re not asking for a lot, we’re just asking for the DEP to acknowledge that there is a problem here,” Greenfield said.

Councilman Ruben Wills (D-Jamaica) spoke at the press conference and said that he wants the DEP to audit every water meter and release the results to the city council.

As for Lev, he isn’t sure what the next step is in terms of these bills, but he said that by going to his local councilman, he hopes to bring to light the problem he and many others are facing.