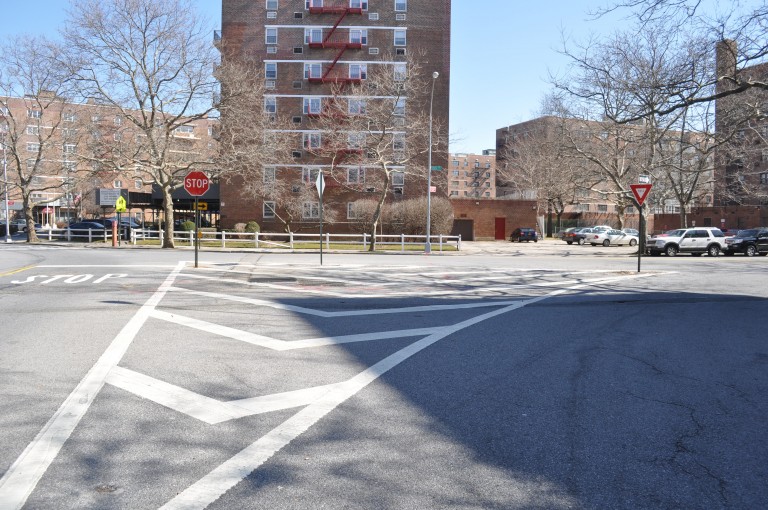 Assemblyman Phil Goldfeder wants the Department of Transportation to look at safety improvements for the intersection on 88th Street and 153rd Avenue in Lindenwood, as he says the signage that directs traffic is confusing to drivers and could cause accidents. Forum Newsgroup Photo by Luis Gronda.

Citing safety concerns, Assemblyman Phil Goldfeder is calling for an intersection in Lindenwood to be reexamined and possibly changed.

Goldfeder said that he wants the Department of Transportation (DOT) to look at the intersection of 88th Street and 153rd Avenue in Lindenwood because the triangle and signage that currently directs traffic is confusing for drivers. According to the assemblyman, people driving frequently turn into the wrong lane or ignore directional signs, which causes them to drive over crosswalks or ignore other motorists’ right-of-way.

“I don’t think it takes an expert to see that it’s going to cause some problems,” he said.

Goldfeder has two ideas for how to fix the intersection and he hopes DOT will choose to adopt one of them. He said one option is for it to become a traffic triangle with a green space for trees, which would prevent drivers from going through crosswalks. His second idea is to turn it into a traffic circle, or a “roundabout” similar to what you would find in Brooklyn. The circle would slow traffic down for residents.

Despite residents’ concerns, a DOT spokesman said that their records show no accidents or injuries between 2006 and 2010 – data for 2011 hasn’t been calculated yet.

In any case, Goldfeder said that the DOT and Department of Parks should work together to come up with the best solution for that area.

“Fixing this problem now could help prevent a serious tragedy in the future,” he said in a press release regarding the intersection.