Thanks to a new pilot program, the next must-have mobile app could be developed by any one of Ridgewood’s brightest students.

Ridgewood-based Grover Cleveland High School was recently selected as the only school in New York State—and one of only five nationwide—to be part of a pilot program initiative aimed at giving schools the tools they need to create new mobile apps, which could potentially be used nationwide.

The pilot program, called the Mobile App Curriculum, is designed to promote the teaching of mobile app development to high school students across the nation. It is being sponsored by Lenovo, a $21 billion tech company and the second largest personal computer vendor in the world, and the nonprofit National Academy Foundation (NAF), which hosts a network of career academies that promotes professional development among high school youths nationwide.

Beginning in March, 40 seniors in Grover Cleveland’s information technology program—which has 120 students from all grades enrolled in the program—will divide into 13 groups to create and market their own mobile app. From there, judges from Lenovo will select one group to advance to a national competition at NAF’s 2012 Next Conference this July in Washington; Lenovo will market the winning group’s app nationwide.

As part of being chosen to host the program, Lenovo is giving the Ridgewood school an estimated $15,000 worth of technology needed to develop mobile app programs, including 30 ThinkPad Tablets, several ThinkCentre HD All-in-One desktops computers, and a projector.

Grover Cleveland is one of five schools from the national NAF network chosen to participate, along with Downtown Magnets High School in Los Angeles, Pathways to Technology Magnet School in Hartford, Conn., and A.J. Moore Academy of Information and Technology in Waco, Texas. 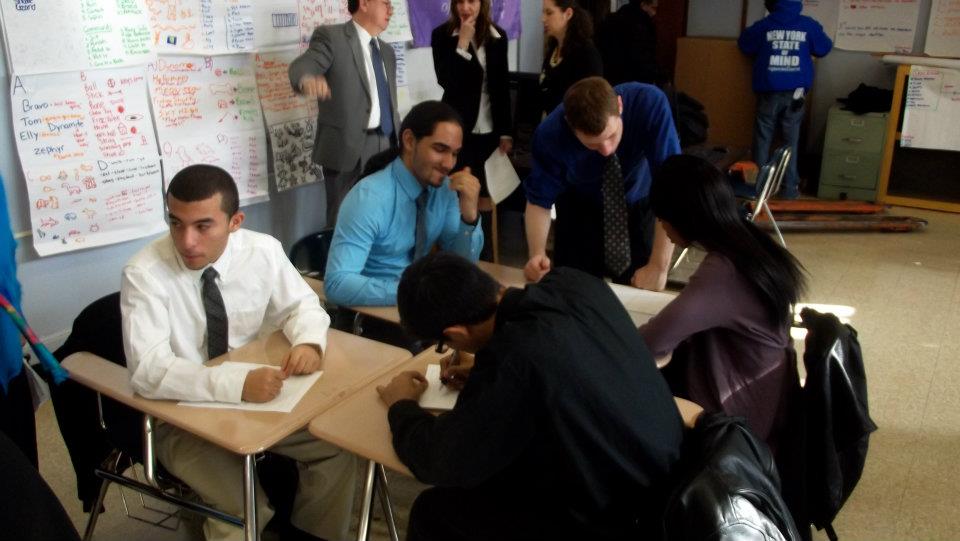 According to John Pritchard, the Ridgewood school’s assistant principal of Science and Technology, the program is also the only school in New York City that teaches its students about Oracle based computer programs, widely used by many businesses.

Since the school program’s inception, it has steadily flourished, with as many as 40 students enrolling in info tech courses each year. Several students who have graduated have pursued careers in computer design, attending schools such as the Polytechnic Institute of New York University in Brooklyn and Devry University, according to Pritchard.

“We have a lot of children that are developing an interest in the program,” he said. “In fact, we get seniors who want to enroll in it, but you have to have started as a freshman.”

Pritchard credited Andrew Woodbridge, who has taught courses for the program since 2003, for his work in helping children learn 21st century computer skills that they can take with them beyond Grover Cleveland’s borders.

“We never even dreamed that it would get this far,” Pritchard said. “And the difference [between our program and the other four chosen] is that since we’re a [public] school and we’re not specialized, we can teach these skills to any child that really wants to learn it.”

Denise Vittor, principal of Grover Cleveland High School, praised the efforts of school staff that coordinate the school’s information technology program, which started in 2002 under the suggestion of the school’s recently retired principal Dominick Scarola.

“We’re obviously very excited that we’re able to provide this opportunity to our students,” she said. “It’s a very big honor, and we’re glad that Grover Cleveland has the chance to be a part of it.”