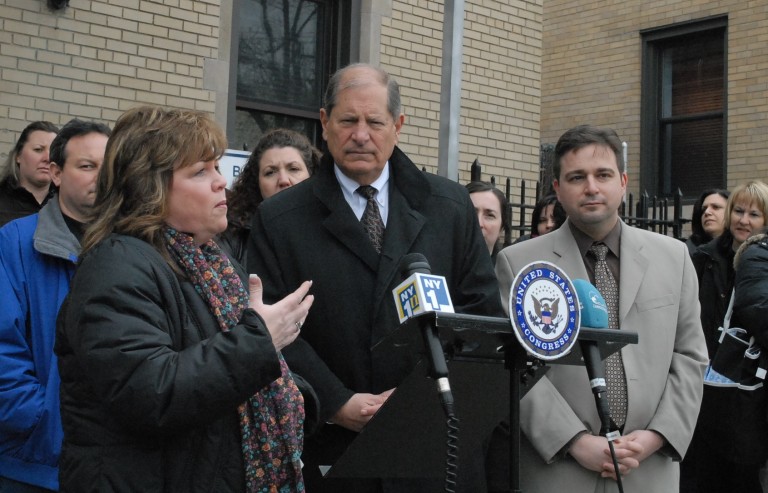 Congressman Bob Turner (R-Queens) wants to give parents who pay for private school a tax break.

At a news conference in front of St. Margaret School in Middle Village on Friday, March 2, Turner introduced the Tax and Education Assistance for Children (TEACH) Act.

The bill would essentially give up to $5,000 in tax credit to families who pay tuition for at least one child at a private elementary or secondary school.

He brought up Kelly Redmond, whose son is in first grade at St. Margaret, to illustrate his point.

Redmond said her family can barely afford spending $3,000 in tuition at the private school after she had to stop teaching public school.

“I was diagnosed with cancer and can no longer work,” she said. “My husband, he’s the only one working. We don’t go 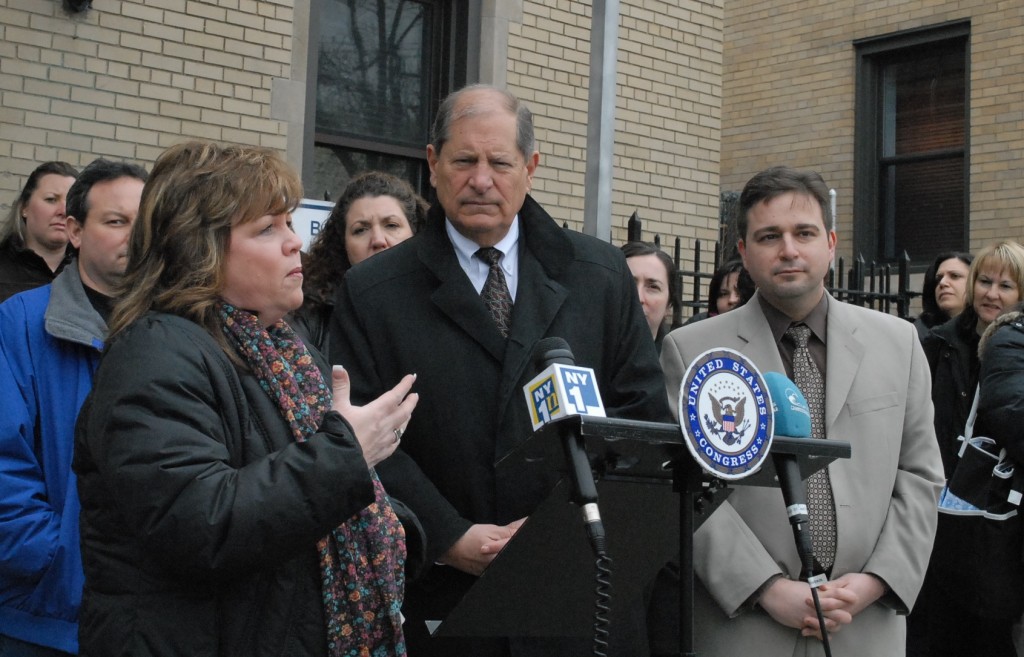 Kelly Redmond, left, is the mother of a student at St. Margaret School and pays $3,000 in tuition. Congressman Bob Turner has authored legislation in an attempt to give parents like Redmond a tax break. On Friday, March 2, he introduced the bill with the help of Redmond and the schools principal, Philip Franco, at right. Forum Newsgroup Photo by Jeremiah Dobruck.

on vacations. We walk. We don’t have new cars. We eat a lot of pasta and a lot of rice.”

Despite introducing it in front of a Catholic school, Turner was clear at the event that he is not positioning this as a religiously targeted tax break—simply one meant for parents paying private school tuition.

He positioned the bill as an incentive for private organizations to take over for public ones. It’s a theme that matches the past rhetoric of Turner—a former cable executive who is in his first political term.

Turner has also been a staunch proponent of a balanced budget amendment, however, and he was less direct on how the lost tax revenue from the credits would be balanced out—saying only that any offset needed would have to be worked out by the Congressional Budget Office down the road.

Assemblyman Rory Lancman (D-Hillcrest), who recently announced he would run against Turner in 2012 if redistricting shakes out to match them up, used the announcement as a chance at one-ups-man-ship.

In a statement sent out Monday, he said he’s been fighting the same fight.

“I welcome Mr. Turner to the cause of making religious education affordable for New York children and their families—the bill he introduced at the federal level is a more modest version of legislation I’m co-sponsoring at the state level,” Lancman said.

Although both provide a tax credit for those who contribute to tuition at religious schools, Lancman’s bill is broader.

A main tenet of his legislation absent from Turner’s is allowing individual public schools and districts to accept donations, which in turn provide tax breaks to the contributor.

Lancman’s bill also allows an avenue for business to receive a tax credit while Turner’s focuses on individuals.