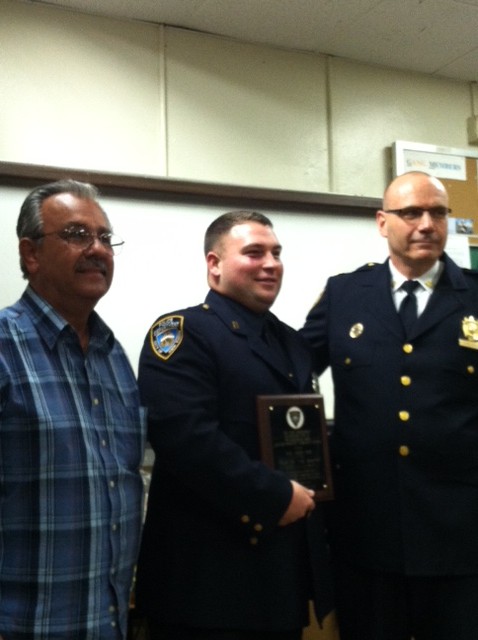 106th Precinct Council President Frank Dardani looked on as Officer John Fox was presented with the March 2012 Award for Cop of the Month award after a successful drug bust and arrest in January. Forum Newsgroup Photo by Luis Gronda.

Auto crime is down in Lindenwood despite the fact that it continues to spike in the city.

That statistic was one reviewed by attendees at last week’s 106th Precinct Community Council meeting. Concerned residents gathered at the meeting last Wednesday and were updated by Captain Thomas Pascale about crime percentages in the community, noting that the Lindenwood Community had actually seen a decrease in auto crimes. The small neighborhood was recently plagued by repeated acts of vandalism involving tires, rims, air bags, small electronics—including portable navigation systems, DVD players, i-Pods. Now residents say they are very pleased with the efforts of Pascale and the 106th Precinct.

Joann Ariola, who regularly attends the meeting as director of intergovernmental affairs and community outreach for Jamaica Hospital, noted that the Lindenwood Alliance had most recently presented their Community Action Award, primarily to recognize the extraordinary measures taken by Pascale to address the spike in auto related crime.

Ariola, a resident of Lindenwood and a co-founder of the Lindenwood Alliance, which was formed a little over a year ago, said, “The difference in our community is dramatic, we still have many issues to address, but the action that has been taken comes to this community as a great relief. People are feeling more protected.”

Pascale presented the Cop of the Month award to Officer John Fox for his actions on Jan. 24. Around 7 p.m. that evening Fox made a routine traffic stop. His visual inspection of the car and the driver brought his attention to a floor board under the front seat on the driver’s side—it was raised about five inches from the floor. Fox followed up his discovery with a call the district attorney’s office to obtain a search warrant.

Police searched the vehicle under the warrant and found a trap door under the driver’s seat. They found it to have a hollowed out area that was equipped with a custom fitted hydraulic lift. The hollowed space was used as a transport bin after a pick-up and to store drugs while going to make deliveries.

The suspect was arrested and the car was impounded after nearly a quarter pound, 103 grams to be exact, of marijuana and 35 grams of crack cocaine were found in the trap. The drugs were packaged for sale according to authorities.

Fox was given the Cop of the Month Award for the skill and professionalism he showed, making this very significant arrest.

The captain also focused on alerting residents to two scams that have not yet been reported in the confines of the 106th , but that he says could “easily happen anywhere”.

“There are precincts close by that have this type of activity going on,” said 106th Community Affairs Officer Kenny Zorn, “it’s important to know about it so we can try to head it off here.” Zorn says the Captain and the precinct will continue to educate citizens. “It’s key in many investigations. People need to be aware so they can spot things and call us immediately.”

Real-estate scamming from Craigslist has populated the news on many occasions and now has surfaced in local communities. Scammers find an apartment that is vacant and easily accessible. They then place an ad on Craigslist to rent the property. When prospective tenants call to inquire, the “owner” sets a time to meet with them. He does the same with other callers and often gets between six and eight people at different times on the same day to come and look at the space.

When the renters get there they are shown the apartment and given a great price on the rent. Then the scammer persuades them to leave a “small cash deposit”, while he gets everything ready— they can pay the rest and security at the time of moving in.

Victims in the city have reported giving between $75-$200 as deposits to secure their new apartments. Scammers schedule their “clients” every 45 minutes or so and can simply walk out of the vacant property at the end of the day with as much as $1500-1600 for their “open house”.

Officials urge renters to seek the help of a professional real estate agent. “People think they’re saving money on real-estate agents,” said the Captain “but you have to be aware that there are these types of predators out there.”

In fact the popularity of these scams has led to the formation of websites where scammed renters can go to tell their story and where potential renters can get information. They maintain a database of repeat offender scammers, posting their last known contact information, to warn others. And it is their purpose to educate owners, buyers and real estate professional about these scams.

The NYPD recently issued a request for the public’s help in searching for Peter Kim, who is believed to have “rented” the same vacant apartment to as many as 12 victims. They were all told by Kim, 31 that they could move into a building at 43-01 46th Street in Sunnyside on March 1. It was reported that one of the “victim tenants” had put his dog to sleep in order to move in because Kim had told him there were no large dogs allowed in the building.

Pascale also alerted those in attendance to another situation that is occurring at gas stations. There have been reports of people hanging around the self-service islands at gas stations, waiting for motorists to pull up and get out of their vehicle. At that time they are approached by someone who offers to fill their tank for $20.

The credit cards being used at the pumps are stolen and the thieves are making small purchases, under $100, and completing several of them in short periods of time. Authorities caution those who think about saving some money on gas and participating in the purchase. Police can collect the camera footage and match up not only the scammer but the car and the driver of the vehicles who made the deal. Law enforcement officials caution that motorists who participate in the purchase can be prosecuted.