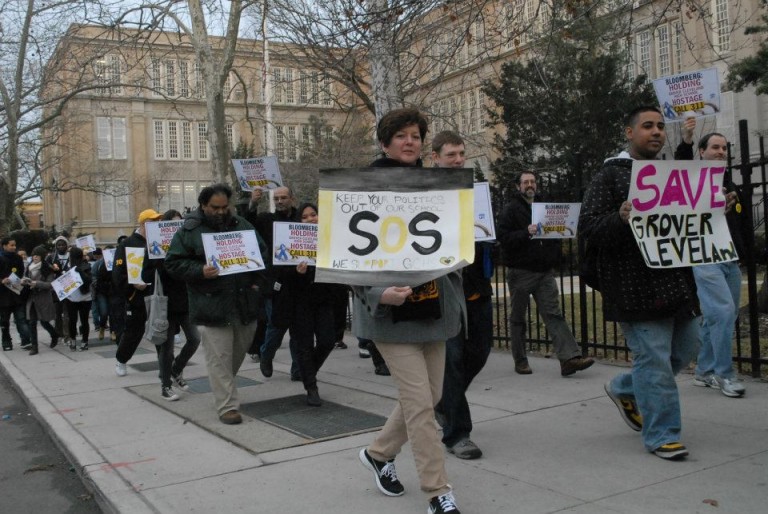 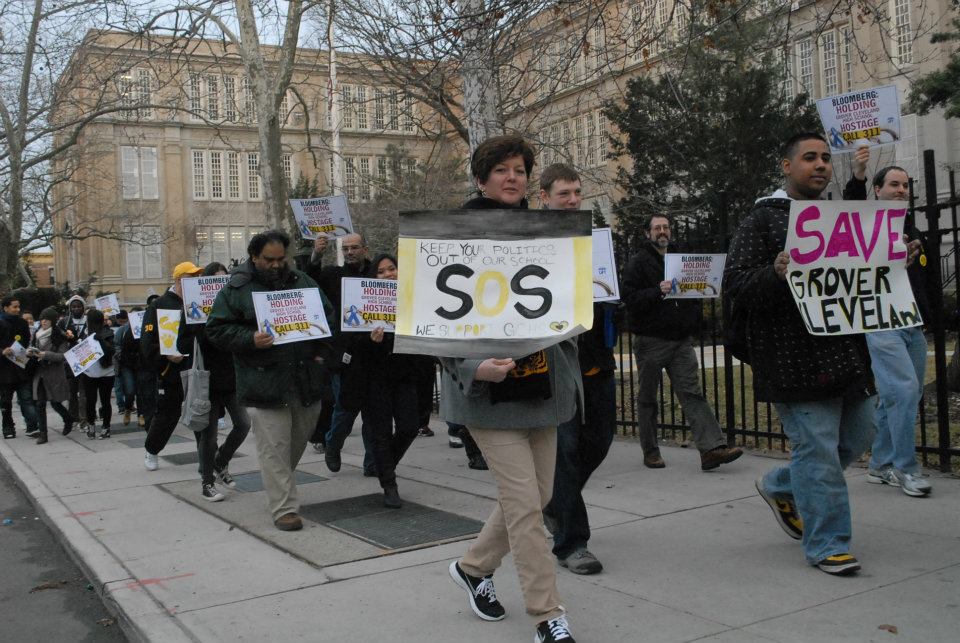 Opposition to Mayor Michael Bloomberg’s plan to close and reopen 33 schools has been building, including a rally at Grover Cleveland High School in February. Forum Newsgroup Photo by Jeremiah Dobruck.

As a vote slowly approaches to close and reopen 33 schools, the fight is gradually escalating against the Department of Education and Mayor Michael Bloomberg.

The Queens delegation of the City Council met Thursday, March 15 near Borough Hall to protest this turnaround plan.

The initiative closes a school, renames it and then reopens it with the principal and half the teachers replaced. The student body would remain unchanged.

Eight of those 33 schools are in Queens, and borough leaders made their thoughts clear.

“I stand firmly against the closing of these eight schools in Queens,” said Forest Hills Councilwoman Karen Koslowitz. “This policy is dead wrong and only hurts students. Closing schools is the easy way out and only furthers inequity between students in our schools.”

The pushback has been building.

Opponents have until April 26 to make their point. That’s when the Panel for Educational Policy (PEP) will vote on the plan.

There will be hearings in April at those and other Queens schools to gauge community reaction.

The Queens appointee to the PEP, Dmytro Fedkowskyj, has acknowledged the vote doesn’t look promising, pointing out that the eight mayoral appointees on the panel can easily overrule the five borough appointees.

the plan. She was on hand Thursday to spur more opposition.

“Closing schools is not the key that opens the door to students’ success,” she said. “This controversial closure plan involves schools that have already improved and now need stability and a stable future. I am happy to join my colleagues in the City Council in a combined effort to keep these eight schools open.”

The mayor began pushing for the turnaround plan in his State of the City address while he and the United Federation of Teachers were still deadlocked over teacher evaluations.

He argued that by replacing half the teachers as required in the plan, it would make the schools eligible for almost $60 million in funding that the state tied to implementing evaluations.

After a breakthrough in negotiations brokered by Gov. Andrew Cuomo, Bloomberg is still pressing forward with the turnaround plan, reaping anger from teachers.

There’s still no finalized evaluation plan for New York City, but now the turnaround itself is helping hold up negotiations

.“We are asking for the Mayor to stand with us in support of our schools or get out of the way and stop hurting our children,” said Dermont Smyth, the Queens Representative from the UFT, who attended the press conference.

. “Mayor Bloomberg’s proposal to close these eight schools in Queens will only have negative effects on the children and teachers who’ve call these institutions home for years,” said Council Member Jimmy Van Bramer, a graduate of Bryant High School. “I will continue to stand with my colleagues in the City Council to fight this proposal and keep our schools open.”