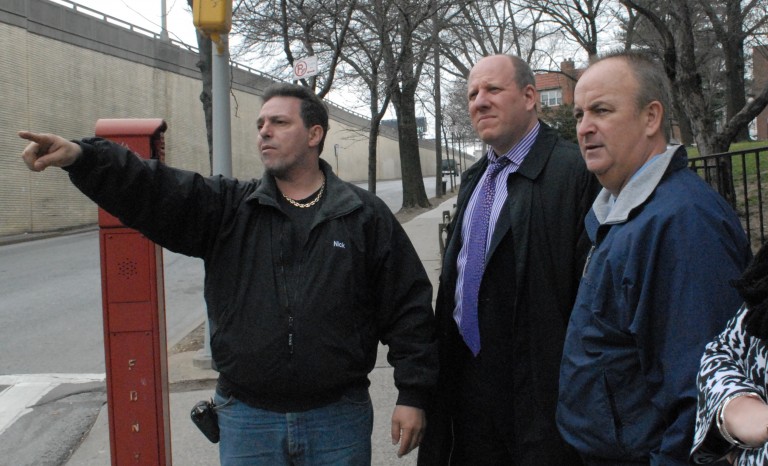 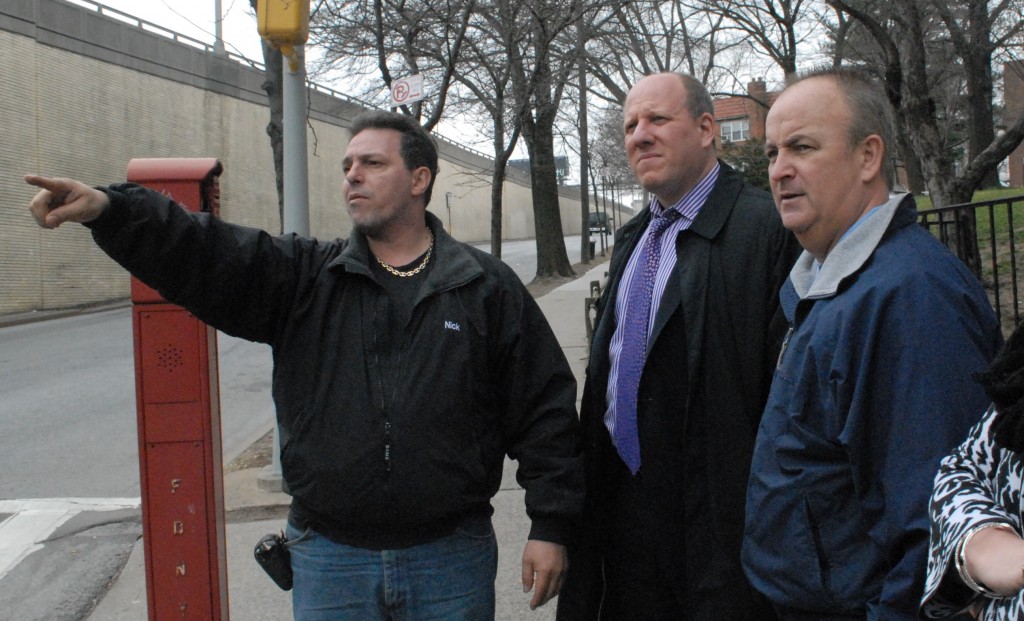 Parents got the walk through, but the Department of Education (DOE) won’t say what’s next.

Answering the call of angry residents and Councilman Jimmy Van Bramer, DOE representatives followed Community Education Council 24 on a tour of a Woodside intersection that parents say is endangering their kids.

Two high-ranking DOE officials walked the route from the Big Six Towers in Woodside to P.S. 229 in Maspeth. But they gave no indication if parents might win back the bus service that’s been the point of contention.

Two years ago, students at the Big Six had to start walking to P.S. 229 when the DOE’s Office of Pupil Transportation decided the route wasn’t hazardous enough to warrant a variance for bus service.

On Thursday, March 15, walking for just under a mile, the group of a few parents, CEC members and the officials passed under the Brooklyn Queens Expressway at Laurel Hill Boulevard and 61st Street—which has been the sore point.

But the representatives and DOE would not say if any change is even being considered.

Bill Kregler lives in the Big Six next door to the intersection and sits on CEC 24.
Kregler, a retired fire marshal pointed out that kids have to walk past two BQE off-ramps through an intersection where the corners aren’t 90 degrees, that there are high walls supporting an overpass and that trucks pass through frequently.
Minutes before he started describing the problem, a car exiting the BQE had screeched to a halt in the crosswalk of the intersection.

Eric Goldstein, CEO of school support services, and Alexandra Robinson, executive director of the OPT, looked on while Kregler and others pointed out dangers they saw.

Nick Comaianni, president of CEC 24, said last time parents asked for a walkthrough an inspector arrived—not a CEO and executive director—and parents couldn’t impress their plight on him.

Goldstein and Robinson were often inquisitive but stone-faced, careful not to let on how any decision about the intersection might lean.

Before leaving, Goldstein brushed off questions about a preliminary decision or next steps in the process.

He said only, “We got invited out by CEC 24. We came, and we walked as we promised.”

A DOE spokeswoman responded much the same way, saying, “The CEC asked us to conduct a walk-through and we conducted one on Thursday.”

When pressed about whether the DOE is even considering restoring bus service, she said there was nothing more to add.

Tracey Haggerty, one of two parents who also walked the route, has two sons who go to P.S. 229. Her family is one of a few dozen at the Big Six whose kids attend the school.

She was hopeful that a close-up look by the DOE would help alleviate what she sees as a dangerous walking route and a buildup of cars in front of P.S. 229 from parents who refuse to let their kids walk that way and drive them to school instead.

“This was a big step to happen,” she said. “If [the DOE officials] do the right thing, we can be proud.”

Now, she and the more than 30 neighbors with P.S. 229 students just have to wait.
“All our cards are on the table at this point,” said Kregler, who has heard nothing from the DOE tis week but was convinced the walkthrough had an impact.

“We’re optimistic that this will have a positive result,” he said.
Comaianni asked to have some kind of decision from the OPT by the CEC’s next meeting, which is scheduled for 7 p.m. on Tuesday, March 27 at P.S. 102 at 55-24 Van Horn Street in Elmhurst.