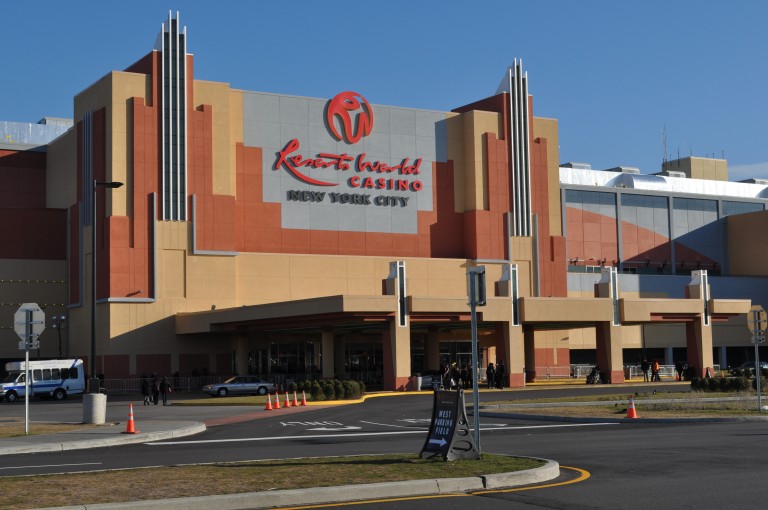 Lawmakers passed the first step of the process that could legalize full table gaming at the Resorts World Casino in Ozone Park and other locations throughout the state. Forum Newsgroup Photo by Luis Gronda.

As part of a legislative package pushed through with redistricting early Thursday morning, lawmakers made the first step toward legalizing full table gaming in New York.

In the wee hours of March 15, both houses of the state legislature voted to support the constitutional amendment needed to create full-fledged casinos in the state.
To be official, the amendment must also be passed by a newly elected legislature and be ratified by voters. The soonest this could happen is in 2013.

Nevertheless it’s a step forward in a plan floated by Gov. Andrew Cuomo that would likely include Resorts World Casino in Ozone Park winning the right to table gaming.

The vote on Thursday was for a general amendment without specific limits or locations for casinos. Lawmakers are likely to hash that out at a later date, Assemblyman Phil Goldfeder (D-Ozone Park) said.

Goldfeder represents the area around the Aqueduct racino; he supports the amendment and was about to speak in favor of it when it came to a vote.

In an interview after the decision, he had nothing but praise for Resorts World, saying there is no bigger proof than the racino that legalizing gambling would be a boon for the economy.

It comes down to jobs, the assemblyman said.

“Resorts World has done a great job of looking to the local community for its workforce,” said Goldfeder, crediting the company with hiring more than 1,000 workers, mostly from Queens.

Ozone Park’s other state legislator, Senator Joe Addabbo, was absent from the vote, but threw his support behind Resorts World and its parent company, Genting.

“Due to the procedural breakdown in the Senate Chambers during the March 14 session, I refused to take part in a process that silenced the voices of our people in the state. Nevertheless, I would have supported the certain passage of the New York State Gaming legislation, which was the first step in what will probably be a three-year process,” Addabbo said in a statement.

He and others left in protest when a flurry of bills were quickly pushed through the legislature as part of a brokered deal that passed controversial redistricting lines.

Both Addabbo and Goldfeder sit on their houses’ racing, gaming and wagering committees.