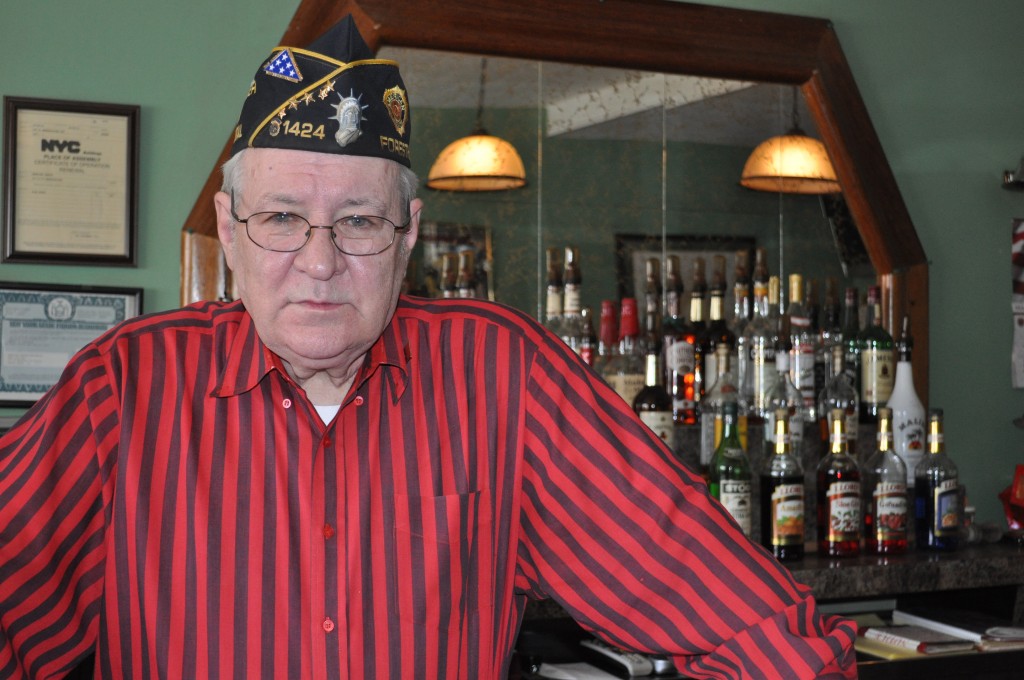 Gene Burch is a 67-year-old Vietnam veteran and chair of American Legion Post 1424 in Forest Hills. He says the city has trapped his post into $4,900 of fines. Forum Newsgroup photo by Luis Gronda.

Forest Hills veterans feel like they are under attack from the city.

Health inspectors are treating American Legion Post 1424 on Metropolitan Avenue as if it’s a restaurant. There is a C grade posted, and the location has wracked up $4,900 of food-handling fines.

It’s been penalized for things like not having a washbasin next to the grill in the back yard and not having a lock on the ice chest, Gene Burch, a 67-year-old Vietnam veteran and the post’s chairman, said.

Not to mention, anyone pouring a drink is expected to have certification.

“He can’t even serve himself a beer because he doesn’t have a food handler’s license,” Burch said about one of the members in the Post. “And he has a Medal of Honor.”

This all started about two years ago, Burch said, when an inspector told him the location needed to file for a food establishment license because it serves ice.

When Burch got a food establishment license, inspectors told him he needed food handlers’ licenses.

After he got a food handler’s license, they told him he would be held to the same standards as restaurants in the city.

It’s gotten so bad, Burch said, that inspectors threatened to shut down the post when he told them he didn’t have authorization to unlock a gun cabinet for them to search.

Now it’s come to a head, with almost $5,000 owed, local politicians are stepping in with legislation and encouraging Burch to stand his ground by not paying the fines.

State Senator Joe Addabbo (D-Howard Beach) and Assemblyman Michael Miller (D-Woodhaven) have introduced a bill on the state level that would give veterans posts 120 days to correct health violations before any fine is levied.

“Groups like the American Legion serve an incredibly important role for our veterans – giving them a voice, a presence, camaraderie, and a vital network of social and support services,” Addabbo said in a statement. “Veterans have already paid their debt to the city and nation. They should be treated with respect, and differently, from other establishments.”

She plans on introducing legislation exempting religious, fraternal and charitable organizations from getting food handlers’ licenses if they don’t actually prepare food there.

This would lift an undue burden on establishments like the Forest Hills post, a spokesman for Koslowitz said.

Congressman Bob Turner (R-Queens) has even been in touch with Burch. Turner recently awarded a Bronze Star to one of the post’s 300 members and said a call to his office should’ve been one of the first Burch made.

The chairman is worried this isn’t an isolated incident though and veterans throughout the city could be suffering the same fate he is but without the help.

“What I say is that I know everybody and [the city is still] doing it to me. What about the poor veteran who doesn’t have the connections I have?” Burch asked.

The Department of Health and Mental Hygiene maintains that it’s just following policy and requiring a food service permit the same way it would anywhere else that serves food or drinks.

“The American Legion is full of heroes who put their lives on the line to defend democracy, but they must still have a permit, allow inspections and pay fines,” Chanel Caraway, a deputy press secretary said.

Department representatives did not answer whether there are other American Legion Posts in the city graded the same way, but there were no others listed in their online restaurant database.

There was also a single Veterans of Foreign Wars establishment listed with an A grade.

Burch said he isn’t trying to skirt fines, he simply feels trapped and tricked by the city because he continually followed directions but was always penalized for something new.

“We’re in rough shape right now,” he said. “We’re waiting for what’s going to happen next.”

It’s new for him, feeling alienated from his own establishment, he said.