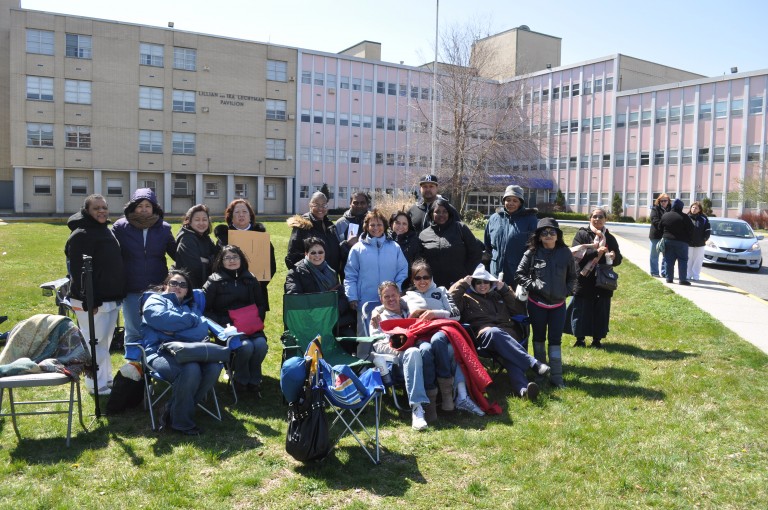 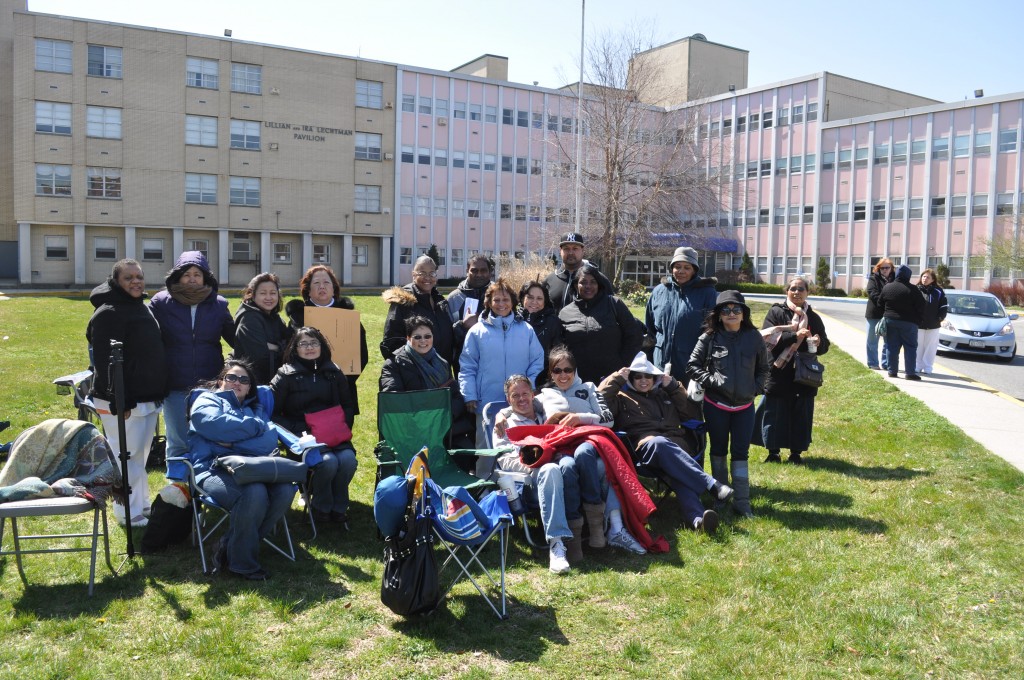 Peninsula hospital workers gathered outside the facility on Tuesday, March 27 in protest of its closure. The protestors, many of whom are registered nurses at the hospital, want the Department of Health to re-inspect the hospital in hopes of it reopening. Forum Newsgroup photo by Luis Gronda.

In a stunning about-face, despite recent efforts to get Peninsula Hospital up and running, the hospital will be closing its doors for good.

Hospital workers told The Forum this week that they had received word that the Far Rockaway-based hospital, which has been partially shut down since February, will now be closing after a last-minute bankruptcy filing on Monday.

The Daily News first reported Monday that Lori Lapan Jones, who is a court-appointed trustee that is handling the hospital’s proceedings, filed papers in bankruptcy court on Monday calling for the closure of the hospital.

In late February, the state Department of Health (DOH) ordered a partial shutdown of the hospital and a closure of its lab facilities following an inspection that cited more than 60 areas of concern within the lab, including poorly trained staff and the handling of stored blood for patients.

Since then, hospital officials stated that they were hoping to have the lab back in operation by late March, and told The Forum that they were in the process of addressing the concerns listed in DOH’s report.

In order to reopen its facilities after a DOH-mandated closing, the process is for the hospital to file a plan of correction, which the department would review and comment on, followed then by an inspection, according to Michael Moran, a spokesman for the DOH.

State DOH officials confirmed that they had received word of the closure, adding that Jones had stated in her court papers that she had previewed the plan with DOH staff, but was informed that there was “substantial work to be done” to bring the lab back into compliance.

Jones recommended to close the hospital, due to a lack of funds needed for that work.

According to Jennifer McCann, a nurse who has worked at Peninsula Hospital since 1991, the move to close the hospital caught many of its employees, estimated to be around 1,000, by surprise, as they had initially heard that the hospital was attempting to get back in operation.

In fact, the hospital had temporarily laid off roughly 60 employees earlier this month in a cost-saving measure while they worked to get the hospital back up to code.

“We just don’t understand why this is happening,” McCann said of Jones recommending to close the hospital, adding that Revival Home Care, an investor for the hospital, had the finances to do the work.

McCann added that she had heard that the hospital was either close to or at the level needed to get the labs up and running again, but Jones had obviously opted to go another route.

As a result, between 30 and 40 hospital employees demonstrated outside the Far Rockaway hospital Tuesday in a peaceful sit-down to protest the hospital’s closure. Patients and hospital employees expressed their worries over their future, and that of the surrounding area, without Peninsula Hospital.

Mary Liz Grosseto, a Belle Harbor registered nurse in the hospice unit for the last 15 years, said the closure of the hospital would be “disastrous” for the community, noting that the distance from Breezy Point to St John’s Episcopal Hospital is about 10 miles.

“There would be one hospital to serve the entire peninsula of at least 140,000 full-time residents and then you add in another 50,000 during the summer,” she said. “They (St John’s) cannot possibly handle the load. It’s not physically possible for their building and their workers.”

“It’s like a real family hospital,” said Anthony Symes, a registered nurse at Peninsula Hospital since 1987. “After all this chaos has gone on, I feel like we were peaceful, I felt we were good.”

Referring to its closing and how it affects the hospital’s patients, Patricia Smith, a clerical worker at the hospital for 22 years, said, “My patients are like my family, that’s what’s bothering me the most.”

Smith said she saw one of her patients just break down and cry upon receiving the news. “They feel like they’re totally abandoned,” she said. “Because of the area, they feel like there’s nobody speaking for them.”

Regarding how St. John’s Hospital is dealing with patients now that they’re closed, Smith said, “The other hospital is not equipped to deal with the overflow. “People are sitting there seven to eight hours, waiting to be seen.”

Kim said that she deals with a lot of people who have high blood pressure and juvenile diabetes. She said that if this hospital stays closed, it would take over an hour to find another hospital for those patients. This happened to her mother-in-law.

Kim added that this is a hospital that serves low income families and elderly people.

“We are serving about 30 to 40 nursing homes and in an emergency, they come here,” she said.

Kim said that she wants the hospital to be reinspected. “Give us a chance,” she said. “Inspect us.”

“It’s a tragedy, ” said Delgado, referring to the closing. Delgado goes to that hospital to get chemo for her breast cancer. “Now we got to find other places to go to get treatment.”

St John’s Hospital is on Beach 20th Street, which is about 1.5 miles from where Peninsula Hospital is. For Delgado, to travel such a distance for medical treatment is a sobering hardship.

“That’s a mile and a half for us. Now imagine places like Breezy Point, Riis Park, Edgemere,” she said. “If they’re going to go to another hospital, they’d have to go over the bridge.”

“God forbid there’s a person with a heart attack and that bridge is open at that time,” Delgado added. “I just think it’s a disgrace. They’re going to leave us with one hospital.”

Hospital officials have not returned requests for comment at press time.

In terms of what DOH’s role will be in the Peninsula closure, a statement from the DOH released to The Forum Tuesday stated that the department will monitor operations at Peninsula to “ensure an orderly closure.”

Commenting on the hospital’s closure, Queens Borough President Helen Marshall said Monday that the situation was coming at a bad time with the summer months approaching and tourists populations around the Rockaway Peninsula set to rise–along with higher accident risk rates.

Marshall also pointed out that warnings were ignored regarding a November 2006 health care report, done by accountancy firm PriceWaterhouseCoopers, that called for one new comprehensive hospital built in the Rockaways, with a collaborative and cooperative effort by Peninsula and St. John’s hospitals.

“There is a medical crisis in Rockaway. One hospital is now responsible for the care of more than 100,000 residents living on a peninsula that has limited access and egress options,” she stated.

Marshall added that she was assured in writing by DOH that state health commissioner Nirav Shah’s office was working closely with Peninsula Hospital to provide support to their efforts to come back into compliance.

“The health and safety of our families are now in serious jeopardy, with decreasing access to quality and affordable health care,” Goldfeder said in a press statement.

“I have been in constant contact with the Department of Health and will work with them, my colleagues and community leaders to come up with a plan to get Peninsula Hospital back on its feet and working for the communities of Southern Queens and Rockaway.”