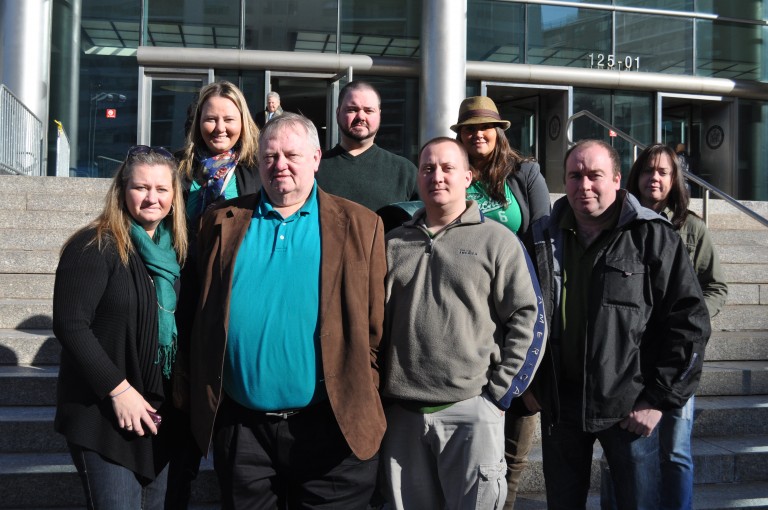 The Gibbons family has attended every court date for the man accused of killing George Gibbons. Now they finally have some news as the Queens District Attorney prepares to offer a plea deal.

A plea deal could end the suspense for a Maspeth family waiting to see what happens to the man accused of killing a beloved brother.

Peter Rodriguez allegedly killed local bar owner George Gibbons in a hit-and-run drunken driving incident. He is now expected to take a deal that will land him in prison for three-and-a-half to seven years.

“This is all crazy news to us,” Siobhan Gibbons, George’s sister, said at the Queens Criminal Court on Friday, March 23.

She and her family had just heard from the Queens District Attorney staff that they expect a guilty plea from Rodriguez at the next court date in exchange for a shortened sentence.

It’s strictly preliminary until a plea is entered, but a D.A. source said they expect Rodriguez to plead guilty to second-degree vehicular manslaughter and leaving the scene, which would carry three-and-a-half to seven years of time.

Those crimes carried up to a 15-year sentence.

Despite their wish for more time, the Gibbons said they’re happy to have an outcome in sight.

The family and many friends have insisted on attending every scheduled court date—knowing that they would likely only be there to see a rescheduling.

Four times they have trekked to the courtroom to hear just a few minutes of procedures to push back the hearing.

This time though, Rodriguez’s lawyer, Michael Schwed, told the judge there will likely be movement on the case by the new court date next month.

“I’ll be happy now when it comes to an end,” brother Brendan Gibbons said.

Schwed did not return an email seeking comment on the possible deal, and the phone listed on his firm’s website was disconnected.

George was killed in an Oct. 15 crash.

Rodriguez was allegedly driving a Chrysler Sebring the wrong way on a Long Island Expressway service road early in the morning.

George had closed his bar—Gibbons’ Home—and was on his way home in a livery cab when the Sebring slammed into it head-on.

George was the only fatality, and police say Rodriguez fled the scene.

The manhunt for him ramped up when the Gibbons and Councilwoman Elizabeth Crowley (D-Maspeth) blanketed the community with Rodriguez’s picture.

Local politicians and the community also pooled a $10,000 reward for tips leading to an arrest.

Rodriguez was apprehended in Connecticut on Nov. 15 as a result of an anonymous tip.

Rodriguez was also on probation at the time of the incident because of a gang assault he took part in while he was in prison from a previous charge.

A source from the D.A.’s office said it wasn’t clear if he would have time tacked onto his sentence because of that.

He’s currently being held without bail at Rikers Island.

After more than seven months since the crime, the Gibbons are expecting some closure after the next court date on April 20.

“It gets draining,” Siobhan said. “We haven’t had time to mourn.”

For now, Siobhan, her brothers, sisters and father will work on statements to give the court in hopes that the parole board won’t let Rodriguez out before he serves the full seven years.