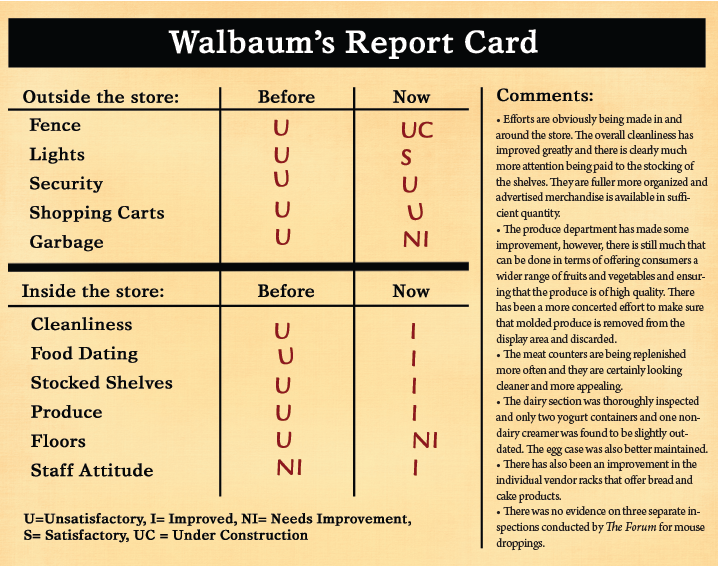 More than one month ago, The Forum began a series of articles that were highly critical of the operation of the Waldbaum’s supermarket on Cross Bay Boulevard. There were rumors that the store would be closing and when they were reported, corporate officers began responding to what they called false claims, by this newspaper.

In the weeks that followed, residents of 95th Street in Howard Beach who share a street with the side of Waldbaum’s parking lot began to register their own complaints about the store involving garbage, drug paraphernalia and the lack of security and lights.

We have been monitoring the store very closely since we began reporting on the conditions, and the residents sent a petition to the corporate office. We are happy to report now that there have been some positive changes in the situation. Please see the report card, which we have compiled.

Be aware that although The Forum has reached out to corporate for response that has not been answered, they have obviously heard and read about the dissatisfaction of the neighborhood and are attempting to correct some of the problems.

One of the issues that has not been addressed at all is to provide security for the parking lot and the situation with shopping carts being left all over the surrounding area is also one which has not yet been addressed. We must remember, however, that the people who are taking the carts from the lot are generally residents who are walking home from the store with them and failing to return them.

We hope that corporate will continue their efforts and raise Waldbaum’s to the level that they detailed in an email they sent in an original response to The Forum which read as follows: “We are committed to providing our customers with an enhanced shopping experience where they can enjoy clean conditions, in-stock shelves and great customer service.”

Here’s how we’ve found them to be doing thus far — we plan to bring you further reports as the need arises.

The issue that the report card does not address is the concern of residents who have spoken with the police about suspected drug activity at the location. According to police sources they continue to increase the presence of sector cars, which has been confirmed by residents, and will continue to work on seeing that residents can feel safe around their homes.