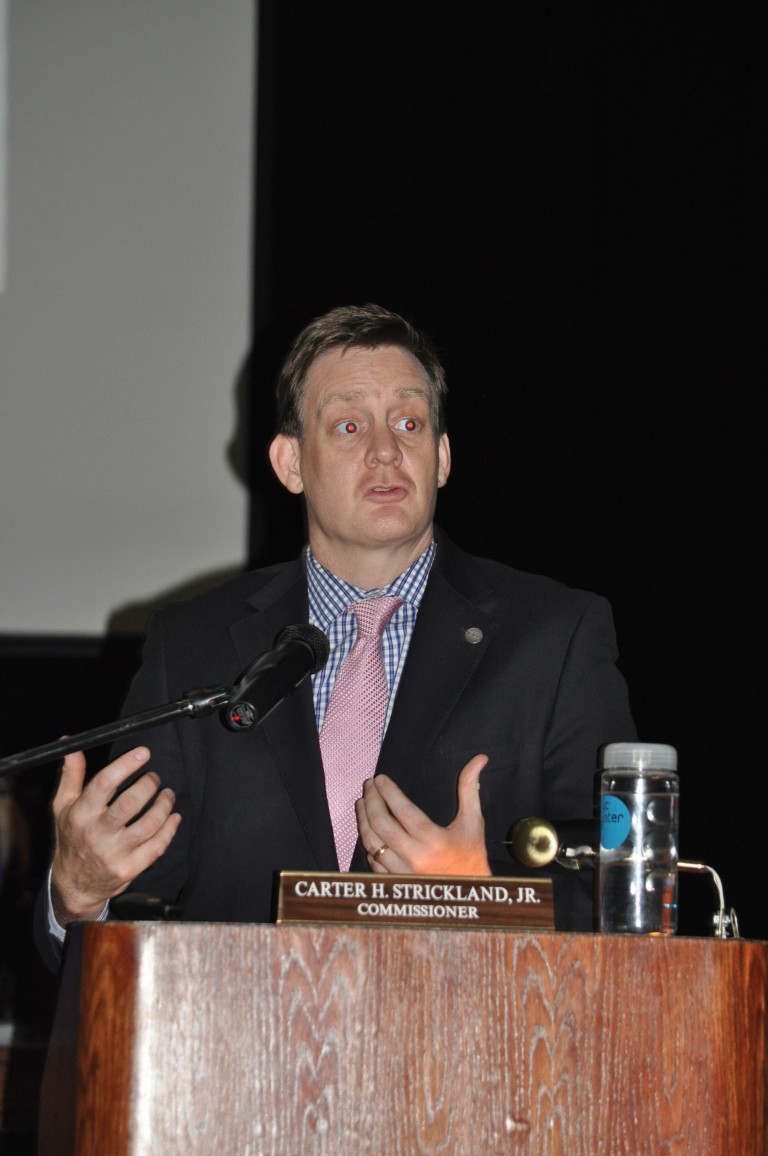 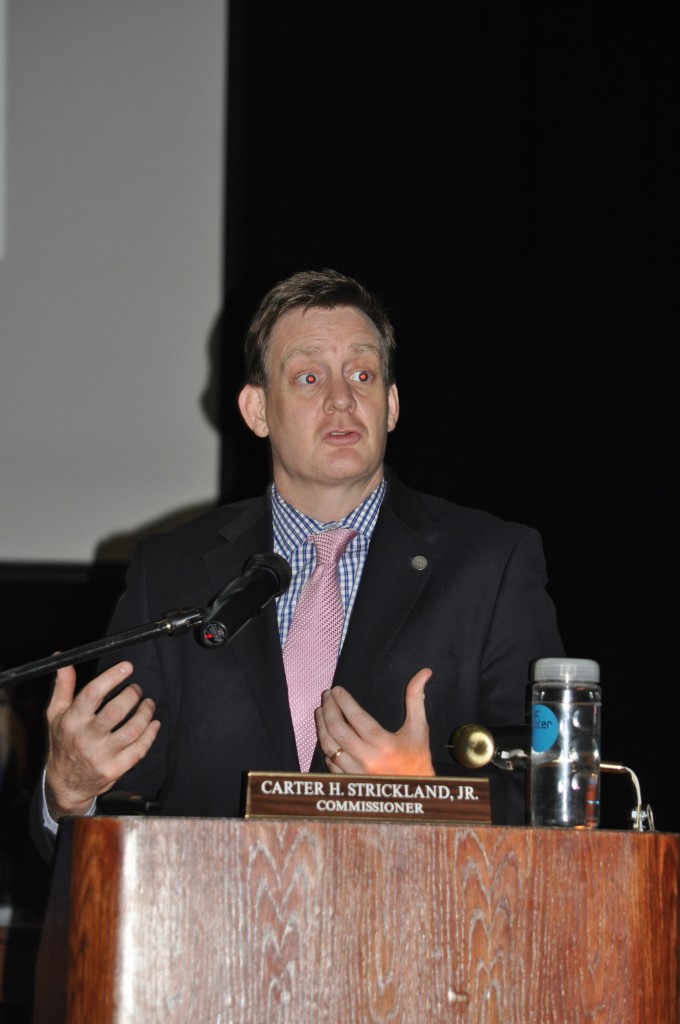 Carter Strickland, commissioner of the New York City Department of Environmental Protection, presented a citywide plan that would increase the water rates by seven percent at a public hearing at Christ the King High School in Middle Village on Thursday, April 26. The hike would be for the fiscal year of 2013 and would begin on July 1 of this year. Forum Newsgroup Photo by Luis Gronda.

Residents andpublic officials got their chance to speak up on Thursday, April 26 against a New York City Department of Environmental Protection (DEP) plan, which would increase water rates 7 percent for the upcoming fiscal year.

In one of five meetings it held throughout New York City, the DEP presented its water rate hike plan at Christ the King High School in Middle Village.

Carter Strickland, commissioner of DEP, said that the main reason for the hike is to cover their debt service costs, which is money associated with capital projects.

According to the DEP, the water hike would raise the average annual charge for a single family home in 2013 up to $939, $62 dollars more than this year. It would also bump up the rate for an average multi-family home to $610, a $39 increase from 2012.

Strickland said that this is the lowest increase in seven years and the third year in a row the actual water rate hike has come below the projected increase for that year. The move would save the DEP about $98 million through the fiscal year of 2015. He also mentioned that their proposed water hike is lower in other cities, including Atlanta, which is 12.7 percent, according to DEP’s presentation on their proposal.

After Strickland finished his presentation, the hearing was opened up to people to give their take on the water increase to Strickland and the members of the New York City Water Board, who were also at the meeting.

Leading off was Assemblyman Phil Goldfeder (D-Rockaway), who criticized the proposal, saying that it adds a burden to people who are struggling to make ends meet. “This is just another way to package a tax and package a charge,” Goldfeder said.

He added that there are many people in his district who are living on a fixed income and that they are the ones that are going to get hit hard with this increase.

“When an agency is proud that we only have to raise your rates by seven percent, then we know we have a problem,” Goldfeder said. “For a lot of people, seven percent is a tremendous amount of money.”

He ended his statement by saying that he submitted legislation last week that would cap water rate increases at a fixed rate of four percent.

Strickland said that Goldfeder’s legislation would only make sense if the other costs associated with the capital projects are accounted for.

He said many of those projects are government mandated and that they need help in meeting those costs.

He also said that it wouldn’t make sense for the water bill to be a fixed rate and that they need to be able to adjust the rate each year, to account for those costs.

Edward Schubert spoke against the proposal. He said that his water rates have gone up 78 percent since he bought his Ozone Park home in 2005.

“The middle class is really suffering right now,” Schubert said. “A lot of these homeowners can’t afford these bills, and I just think that it’s the wrong time for these increases.”

He said that the rates have gone up way too much in the seven years he’s owned his Ozone Park home and it should have been kept in a range instead of the dramatic
increases.

“I think everything went up too fast in too short of a time,” Schubert said.

Strickland said that they would like to keep the water rates at a similar cost from year to year in order to keep homeowner’s finances in mind.

He added that despite those years of high water rate increases, they were still below the national average.

The NYC Water Board plans to formally adopt the 2013 fiscal year water rate on May 4, and it will go into effect on July 1 of this year.