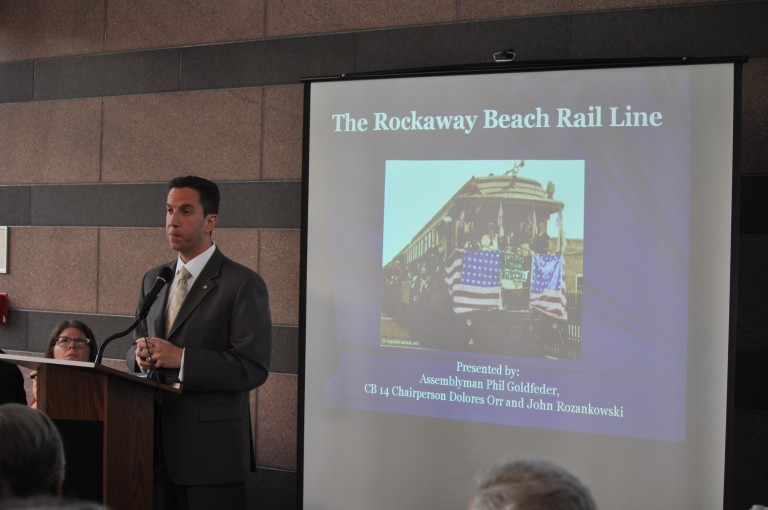 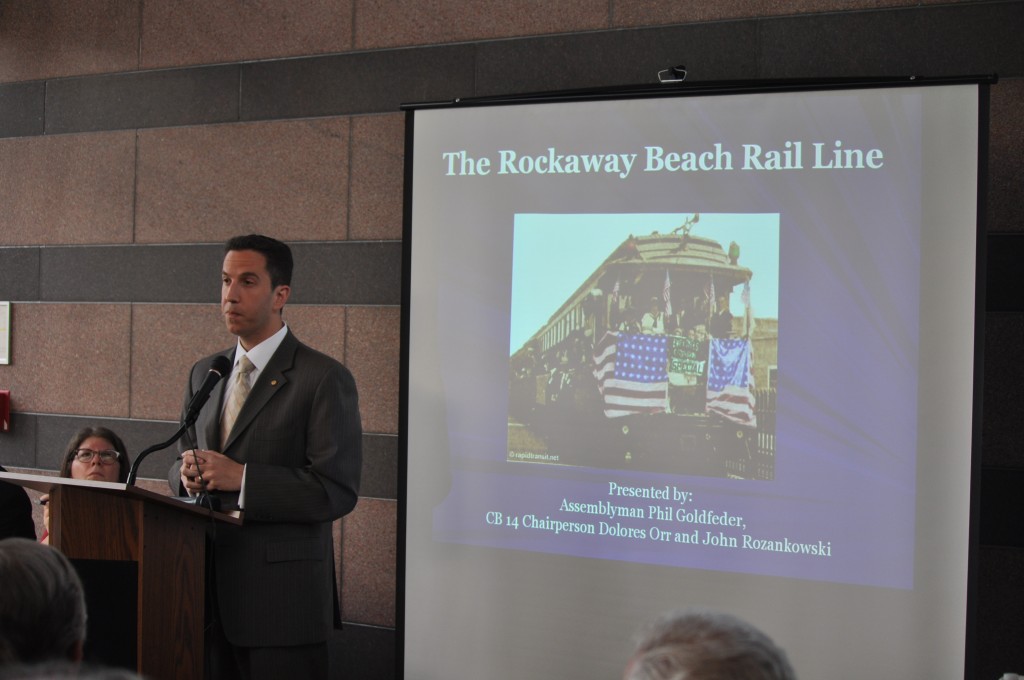 Residents shouted, argued and heckled officials at a public meeting to present their differing ideas for reviving an elevated area that was once home to a bustling transportation line.

The Queens Civic Congress hosted a public forum on June 17 to discuss what should be done with a long-dormant train line that used to run from the Rockaways to Rego Park.

One side wants to restore the Rockaway Beach Rail Line and the other side wants to create The QueensWay, which would be a 3.5 mile bike trail that would go from Ozone Park to Rego Park and cover most of the elevated path that used to be the train line.

The rail line restoration side is represented by State Assemblyman Phil Goldfeder, Community Board 14 Chairwoman Dolores Orr, Vincent Castellano, Far Rockaway native and a member of CB 14 and John Roszankowski, who is a mass transit advocate.

The rail line revitalization would come in one of two ways: The first would be to have the Long Island Rail Road (LIRR) operate between Penn Station and Aqueduct and build at least two other stations, one in Rego Park and another at Aqueduct. At the latter station, you would be able to transfer to the A train and the AirTrain if it was extended from Howard Beach.

The other way would be to divert the R or M subway line east of the 63rd Drive subway station in Rego Park and connect it with the northern part of the LIRR Rockaway Line. Two stations, one for the subway and one for the LIRR, would be built in Rego Park to allow transfers between the two lines.

The QueensWay group featured Andrea Crawford, Chairwoman of Community Board 9, Travis Terry and Frank Lupo, both Forest Hills residents, and Andy Stone, who is from The Trust for Public Land (TPL), a nonprofit company based in San Francisco, Calif., a sponsor of The QueensWay.

As it was decided via a coin flip, Goldfeder and his group was first up to speak.

Goldfeder’s main reason for wanting to revive the Rockaway rail line is that it would give Rockaway residents, and people who live in southern neighborhoods like Howard Beach and Ozone Park, an easier way to travel to northern Queens and Manhattan.

He said it takes nearly two hours for people who live in the Rockaways to get to Manhattan by car or by public transportation. This rail line would cut that trip to about 45 minutes.

“For most people in the Rockaways, that is the reality every single day,” Goldfeder said.

He also said that the rail line would bring improved intra-borough connectivity, allowing people to travel more easily between the Rego Park and Far Rockaway, and decreasing traffic on local highways.

“No one in this room can stand up and say ‘the transportation and infrastructure that we have now is perfect to serve every person in this borough’” Goldfeder said.

Orr said that revitalizing the line would allow residents of the Rockaways to shop in places like Forest Hills and Rego Park, instead of giving their dollars to nearby Nassau County. She gave the example of her grandmother, who raised eight children and was a NYPD detective in the 30’s and 40’s. She used the rail line to get to Manhattan in under an hour and that helped her juggle those two responsibilities.

“I can’t believe that we’ve moved 70 years in the future and we’ve gone from a 40 minute commute to a 1 hour and 45 minute commute,” Orr said.

The QueensWay group wants to turn the 3.5 mile stretch into a pedestrian and bicycle path. They say Queens is underserved in terms of parks and the noise that would come from the trains running through Forest Hills and Rego Park would disturb nearby residents.

Terry said that creating the park would also allow for community events in the areas surrounding the QueensWay.

Other ways the group thinks Queens would benefit from the park include connecting nearby neighborhoods, providing a more direct route to Forest Park and having a new space for exercising and bringing cultural tourism to central and southern Queens.

“This is will be successful if it’s both for the neighborhoods and tourists,” Stone said.

Enid Glabman, the president of the Bayswater Civic Association and a Far Rockaway resident, said people who live on that peninsula need public transportation access.

“We have no access to anything else,” she said.

Bernice Katz, a member of the Forest Hills Cresent Civic Association, said that she’s concerned about the damage and noise the reactivation would cause to the northern neighborhoods like Forest Hills.

“How do they justify destroying the neighborhoods all along the way, so that Rockaway can have an easier commute?” she said.

In response to her noise concern, Goldfeder said that part of the deal of living near a train line or an airport is the noise that the trains and planes make when they zoom by.

“I’m not going to sacrifice an entire borough for seven people that say ‘not in my backyard,’” Goldfeder said, a comment that drew some disapproval from the crowd.