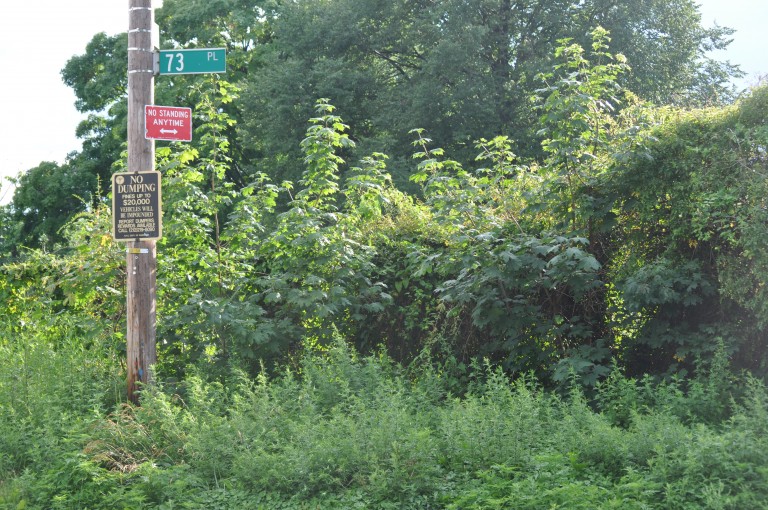 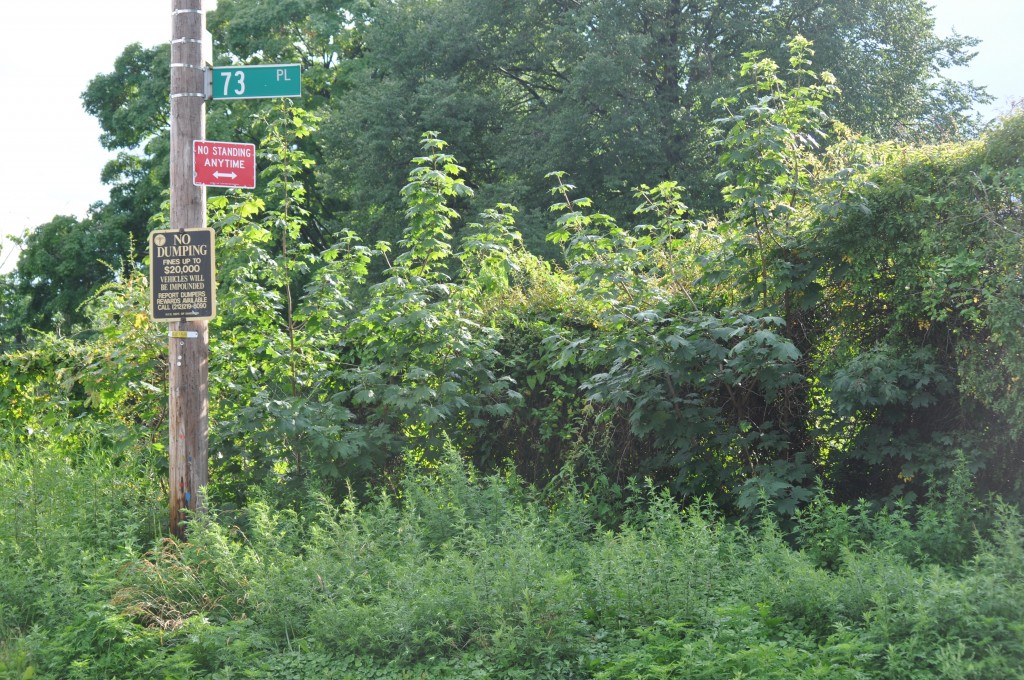 Residents that live on 69th Road in Middle Village have been complaining about grass and weeds that have been engulfing 73rd Place, going from 70th Avenue to 68th Road. Forum Newsgroup photo by Luis Gronda.

For years, Pat Noonan, a resident living on 69th Road in Middle Village, has been asking for a long stretch of weeds, overgrown trees and broken fences on 73rd Place to get cleaned up.

But nobody is willing to claim responsibility for the problem area that runs from 70th Avenue to 68th Road.

Noonan said that the stretch is an eyesore for the residents who live near it. He has seen people drinking and hanging out near a broken fence that leads into All Faith’s Cemetery and he often sees garbage peppered through the overgrown grass.

“The more grass and weeds you see, the more people are going to throw trash in there,” said Noonan.

According to Noonan and another resident in that area who did not want to give his name, they have asked Dan Austin, president of All Faith’s Cemetery, to clean up the weeds and trees that sit on the edge of the property.

Noonan and the other resident have also complained to local and city officials about the area, including State Senator Joe Addabbo, Councilwoman Elizabeth Crowley, Queens Borough President Helen Marshall and the Department of Transportation (DOT).

When asked by The Forum about the area, Austin said that the cemetery does not own that property and it is the city’s responsibility. He said that he has paperwork from DOT that says that the city is in charge of the maintenance.

He also said that the size and width of that side of the street isn’t big enough to make a sidewalk and they are waiting for the city to put a retaining wall in that area.

Austin said that they have been cleaning up that property despite it not being their responsibility.

“We’ve been cleaning it up as favor for years,” he said. Austin said his workers have found condoms and hypothermic needles while cleaning in the past.

But a letter from that Queens DOT Borough Commissioner Maura McCarthy to Borough President Marshall, says the cemetery is responsible for taking care of that area.

“The All Faith Cemetery is responsible for the maintenance of its property,” the letter read, which was obtained by The Forum and is dated January 20 of this year. “This includes vegetation along the side of the road on 73rd Place.”

A DOT spokesperson echoed McCarthy’s letter, saying that the cemetery is responsible for the road’s maintenance.

Noonan also said that Councilwoman Crowley’s office secured a money allocation to clean up the road almost two years ago, but the project never happened.

According to Lydon Sleeper, Crowley’s chief of staff, there is a sewer reconstruction project going on for the southern part of Middle Village that includes fixing up that area.

He said that the Department of Design and Construction (DDC), at the DOT’s request, has restarted a study to determine the cost for reconstruction for that area. Although he wasn’t sure how long the study would take to complete, he said that it was restarted within the past year.

A DOT spokesperson confirmed that there is a future project to renovate that area in Middle Village.

Alex Maureau, a constituent liaison from Addabbo’s office, said that the senator, along with Gary Giordano, district manager from Community Board 5, and about 10 to 12 students from St. John’s University organized a cleanup of the overgrown scrubs and weeds over there back in September 2011. He said that they couldn’t finish doing that area and they went back the next Saturday for some more cleaning.

Maureau said that they have gotten a couple of complaints in recent weeks about the area and are considering organizing another cleanup on 73rd Place.

As for who exactly is responsible for the property, Maureau said that they are still trying to determine who would be in charge of the area’s maintenance.

Giordano said that, to his best knowledge, the city of New York is responsible for taking care of that area.

He said that the cemetery did maintain that area over the years.

“Maybe not as consistently as people would like, but they did it,” Giordano said.

He added that he would try to organize a clean-up of the road on 73rd Place for sometime this summer.

One resident also tried to clean up some of the weeds himself.

Gennaro Martinelli, who lives on Cook Avenue near the road, said that he bought a weedwacker and cleaned out some of the foliage there.
This was after Martinelli hurt himself last year when he tripped and fell while walking his dog in that area. He suffered a torn cartilage in his shoulder, which required surgery.

Noonan said that he doesn’t see any reason that All Faith’s cemetery shouldn’t be well maintained as its counterpart, St. John’s Cemetery on Metropolitan Avenue in Middle Village. “You would want to sleep there,” said Noonan, who described the area alongside All Faith’s cemetery as a “travesty.”

Austin said that they have helped out in cleaning 73rd Place, including helping out Addabbo and CB 5 with last year’s cleanup, and would do so again in the future if asked.