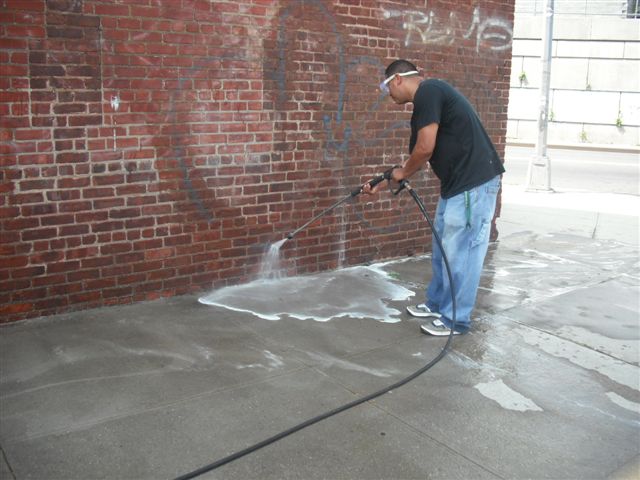 The Greater Ridgewood Restoration Council is feeling a budget squeeze that’s forced them to cut back on their graffiti cleaning services. Photo courtesy of the GRRC.

The Greater Ridgewood Restoration Corporation (GRRC)—a group well known for it’s graffiti removal and landlord or tenant counseling—is the latest to feel the pinch of dwindling state money and grants.

This july, the GRCC was forced to cut back graffiti removal from five days a week to three. Some staff took voluntary pay cuts, and other staff had their hours reduced.

“We’ve tried to do what we’ve had to do to stay in business,” said Angela Mirabile, the nonprofit’s executive director.

That sentiment is quickly becoming a mantra for small nonprofits in Queens like local ambulance corps, community service groups and senior centers.

According to Mirabile, it’s a problem that’s been compounding for three years and is starting to take its toll at the GRRC now.

The organization can scrape by on a budget around $150,000. And in the past, that’s come from a variety of sources.

“It wasn’t just one person that was supporting the program,” Mirabile said. “Everyone was doing their part to keep the program going.”

Cuomo made it a principled stance to cut those pet donations and projects that inflate a budget, but Mirabile said the broadly labeled “pork” isn’t always bad. In fact, it can in fact be efficient, she said.

“People somehow don’t realize it because what gets publicized is the pork that’s bad,” she said. Mirabile insists that other groups could not use the money as efficiently as the GRRC, which has more than 40 years of experience counseling renters, advising landlords and removing graffiti.

“That’s the stuff that you really don’t see,” she said. “You see the negative story, and it makes people think of it as something bad.”

In the most recent budget, Cuomo individually vetoed more than 100 member items.

That consistent rejection of fund- ing coupled with a lack of grants has pinched the GRRC. Mirabile said a good chunk of funding came from community grants from banks, but as they have consolidated, fewer and fewer opportunities are available.

“With those two things, that’s what really did it. Eventually you get to a point where you have to cut right now,” she said.

Many local nonprofits have felt the same pinch. Maspeth Town Hall, The Glendale Volunteer Ambulance Corps and the One Stop Richmond Hill Community Center have all told The Forum they’ve had to adjust to funds drying up.

There is some solace for Mirabile.

A regular contract with the state’s Neighborhood Preservation Com- panies Program has been a saving grace of the GRRC. Because the program is run through the state’s Homes and Community Renewal department as opposed to inserted by a specific legislator, it’s been immune from the “pork” crackdown.

That’s funding the GRRC can consistently count on, Mirabile. It even received an increase in funding this fiscal year.

That doesn’t offset the three years of reduced funding, but Mirabile said that and a small, local non-profit, it’s a year-to-year struggle to adjust the budget and squeeze in as many programs as possible.

“I’ve learned over the years that that’s the nature of these groups,” she said.