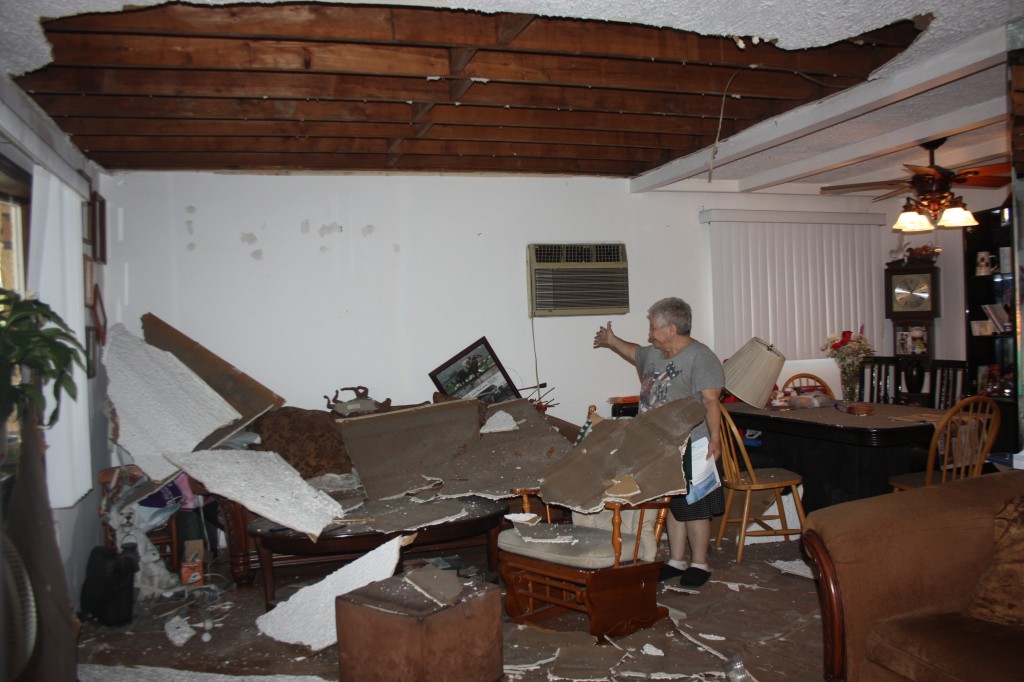 The rocking chair that Sandra Hanan was sitting in less than three minutes before the ceiling in her apartment came down, is shown covered by boards and wood slabs with protruding nails coming out of them. Forum Newsgroup photo by Patricia Adams.

A Howard Beach family was nearly driven from their home after the ceiling in their living room collapsed on Friday morning. Sandra Hanan was watching TV about 9 a.m. when she decided to go into the kitchen for a bite. But as soon as she got in the room she heard a loud splintering sound followed by crashes and bangs coming from the living room.

When the senior citizen raced back inside she was horrified at what she saw before her. The entire ceiling had collapsed onto the family living room, covering furniture with split sheet rock boards and stucco.
The rocking chair where Sandra had been sitting only minutes before was now buried under a pile of broken boards with large nails protruding from them.

Her husband ran from the bedroom to see what had happened–worried that his wife had an accident or even worse, that his 88-year-old mother-in-law who lives with the couple, had fallen. “My heart was in my mouth as I came running down the hall,” Rocky Hanan said. “I looked at the chair my wife sits in every day and couldn’t help but get sick to my stomach thinking about what could have happened to her.” They immediately called the fire and police departments.

Hanan said that he and his wife moved into the apartment a little over a year ago in June of 2011 and that there were problems right from the start. Instead of waiting for the landlord to come and fix little things, he did it himself at the couple’s own expense.

Then last summer things at the house started to get much worse after the basement took on a few feet of water. According to the couple, the landlord didn’t address the problem until everything was covered in mold. “He never had anyone come in and do mold removal,” Rocky Hanan said, “they [workers] just put new sheetrock up on the walls so potential buyers for the house wouldn’t see what was underneath.”

Despite the mold condition he said he had no idea that things were so bad under the ceiling that it would just collapse.

Now the couple says they are fed up with what they say is mistreatment and abuse by their landlord. They have enlisted the help of an elected official and an attorney who has agreed to handle the case on a pro bono basis.
Shortly after the collapse, Sal Simonetti, Deputy Chief of Staff for Councilman Eric Ulrich was at the house to see how his office could help out. “We called Housing Preservation and Development (HPD) and arranged for them to come down and do an onsite inspection of the premisis.”

A neighbor who does construction work came over as a favor to the couple to assess the damage and said the reason that the ceiling caved was because it had been covered with stucco to cover up imperfections in the ceiling. “It’s a cosmetic technique used to mask things on the ceiling that would show through just paint. ” Stucco ceilings he added cause sheet rock to pull away from the nails because of their weight. “Over time the weight just becomes too much for the nails to bear and it gives way.”

A later visit by the buildings department noted several other violations including the lack of smoke or carbon monoxide detectors.

And the situation only got worse according to Sandra when she called the landlord to tell him the bad news. “He used unbelievably filthy language on me. He called me a f—–g low life.”

Sandra says that recently when the landlord told them he had found a buyer he said the new owners wanted them to stay. But a few weeks later she says, on July 20, he told them they needed to get out by the end of the month. “How can you expect people to just pick up unexpectedly, pack up their whole lives and move at their own expense.”

When the Hanan’s told the landlord they would move if he covered $5,000 in moving expenses, he said no to the money and extended the time until the end of August. According to Rocky Hanan, “You couldn’t print what he said to us.”

Now in light of the recent collapse and the violations the Hanan’s say the landlord came to the house over the weekend and apologized for the way he spoke to Sandra. He is working out a deal to pay for them to leave the apartment. “It’s a shame that it has to come to this,” said a shaken Sandra. “No one should ever be treated this way.”