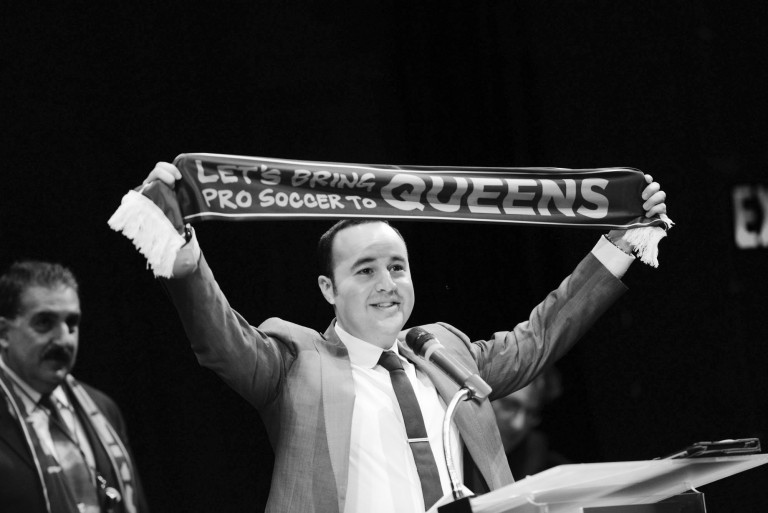 In theory, a major league soccer stadium in the heart of Queens is an idea worth championing and certainly one that most Queens’ residents and politicians can get behind.

But, in practice, MLS’ plan to build a 25,000-seat stadium at the eastern end of Flushing Meadows-Corona Park, by 2016, is generating more questions than answers.

Among some of the key questions that have emerged since MLS announced its stadium plans back in June of this year include environmental impacts, traffic and parking concerns as well as the actual loss of nearly 13 acres of city-owned parkland.

And, despite assurances from MLS that “every inch” of the lost parkland will be replaced, many politicians and park advocates remain skeptical.

“By law, the parkland is supposed to be protected from commercial encroachment,” said Geoffrey Croft of NYC Park Advocates, a nonprofit park advocacy group dedicated to improving city, state and federal parkland in the city. “When commercial ventures come along…everyone is allowed to have the opinion that they can have free land but it’s up to our elected officials to protect our land.”

Risa Heller, a spokesperson for MLS, said the league has spent a lot of time working with the community to identify parcels of land that could be used as replacement parkland.

“It is a decision that will be made by the community and local elected officials and we will do everything to ensure that the new parkland meets all the local state and federal requirements while meeting the needs of local residents,” Heller said.

In addition, Heller said that the stadium plan still needs to go through many phases before it’s a done deal.

“We have a long way to go before we have approval for the stadium,” Heller said.  “We are working to negotiate a pre-development deal with the City, which will serve as a framework for how we move forward. It will leave critical components open to input from the Community and local elected officials, such as what kind of investments we will make in the park (in addition to upgrading the community soccer fields) and where to create replacement parkland.”

Heller said that would lead into a long approvals process that involves numerous public hearings.

At a town hall meeting last week, held by MLS to drum-up support for the stadium plan at the park, MLS’ Commissioner Don Garber told a packed crowd at Queens Theatre-in-the-Park that the stadium would be privately financed and would create 3,000 permanent and temporary jobs while pumping millions into the now neglected park which hosted the 1939 and 1964 World’s Fairs.

MLS currently has 19 teams including a team in nearby Harrison, NJ, The Red Bulls.

At the town hall, Garber did not discuss a name for the 20th Queens team nor did he talk about possible owners. He did point out that the team’s owner would pay $100 million on rights to operate the club.

“The so-called MLS ‘townhall’ was nothing more than a pep rally filled with supporters to make it appear as if MLS has been doing the kind of grassroots coalition building that they should have been doing for years before making their audacious pitch to take away valuable park space to line their own pockets,” Finn said.

A spokesperson for Flushing City Councilman Peter Koo declined to comment on the stadium plan saying that they needed to see more information from MLS regarding environmental impacts to the surrounding areas, among other questions.

“I’m excited to help bring MLS soccer to Queens,” Ferreras said.  “But there are so many unanswered questions about the MLS proposal including identifying replacement park land, traffic and parking impacts, flooding and other environmental concerns and the need for true community input.”

One of those unanswered questions is a somewhat shadowy land deal, reported some months ago in Crain’s New York Business, whereby MLS and the Bloomberg administration had discussed a highly favorable deal that would include a lengthy lease, low to no property taxes and little revenue sharing with the city.

“There are still many important, unanswered questions that MLS needs to address in respect to their proposed stadium site,” said Anna Dioguardi of Queens Community House, part of the Fairness Coalition of Queens, an organization opposed to eliminating park space at Flushing Meadows.

“Most disturbing are the lack of details about a potential lease deal with the City and the absence of an owner for the franchise,” Dioguardi added.  “Flushing Meadows Corona Park is the recreational heart and lungs of our community and should not be compromised in any way for the benefit of private interests.”

NYS Assemblyman Francisco P. Moya of the 39th Assembly District shows his support for the stadium for Queens.