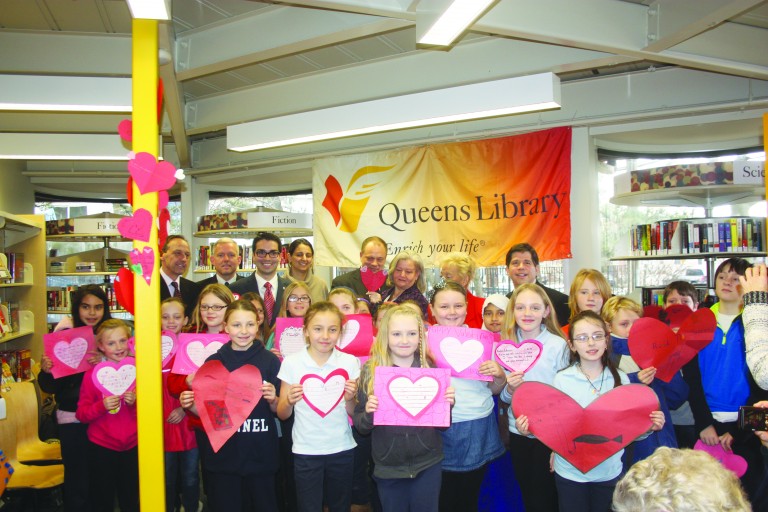 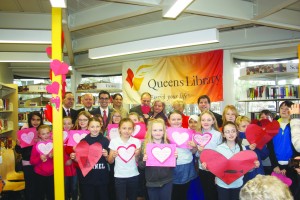 Fourth graders from P.S. 47 in Broad Channel presented paper hearts at the library's grand re-opening, each bearing different handwritten expressions of how much they love the library and describing their experiences there.

The first of four Queens libraries ravaged by Super Storm Sandy re-opened its doors on Wednesday afternoon, to the delight of the Broad Channel community.

“This is a great step forward for our community,” said Dan Mundy Sr., past president of the Broad Channel Civic Association. “For the kids, the seniors and everyone in this small community, this is a giant step toward normalcy.”

And Mundy’s sentiment was echoed by a host of speakers who stepped up to the mic to praise the efforts of Thomas W. Galante, President and CEO of the Queens Library, along with virtually everyone that was involved in bringing the library back to full function just 12 short weeks after two feet of seawater filled the branch, destroying much of it’s collection as well as the carpet, furnishings and electrical fittings.

On a day when a nor’easter threatened in the skies overhead, a community well acquainted with frequent flooding, turned out in full force to welcome back a cherished fixture of the island community.

“It was back in the late ’80’s when then Councilmember Walter Ward pushed for the opening of a library here in Broad Channel,” Galante reminded the packed house. “And now more than 30 years later, this library has a visitation rate substantially higher than the average of other branches.”

And despite suffering $940,000 in damage in the storm, including the loss of more than 16,000 books, the Broad Channel facility is standing strong and ready to serve the resident population that frequents the branch for a lot more than books. “This is truly a great day,” said Councilman Eric Ulrich (R-Howard Beach) who represents the Broad Channel community. “This facility offers so much to this community. It’s place where people can come and put their resumes together on computers they might not have been able to replace after the storm. Or to use the internet if they are currently unable to afford it.”

But it wasn’t only library officials, politicians and civic leaders that spoke about the joys of the opening. Fourth graders from Ms. Janet Ryan’s class at P.S. 47 took to the mic and spoke their piece about how grateful they were to have the library back.

“Queens Library at Broad Channel is a pivotal resource for all ages, an information hub and a community hub. We are so grateful to Commissioner David Burney and the NYC Department of Design and Construction for all their hard word in getting the library re-opened in record time. We look forward to seeing every library in Queens re-built to full capacity serving library customers with books, job skills training, after school enrichment and everything they depend on their libraries to provide,” said Galante.

Among the private donors that helped facilitate the opening of the branch were the United Way who donated $10,000 and Scholastic who donated 40,000 books.