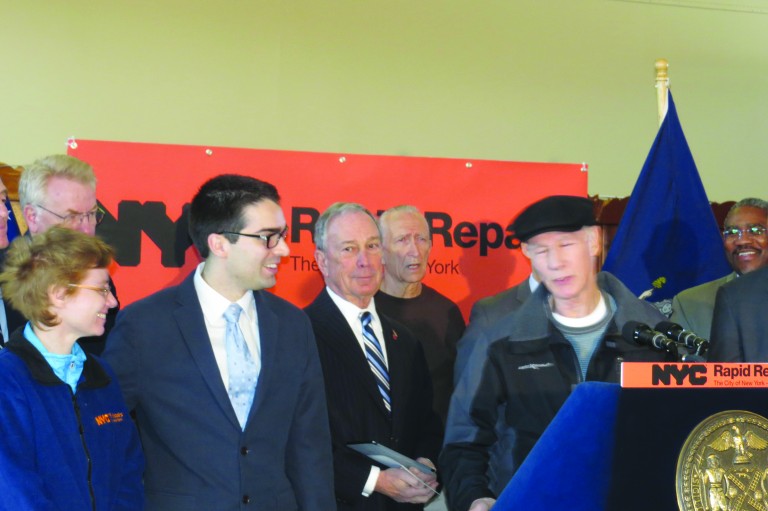 Despite former rumblings throughout the storm ravaged communities touched by Hurricane Sandy concerning the effectivity of the Rapid Repair program, last week to praise Mayor Michael Bloomberg and his administration for the very same program. 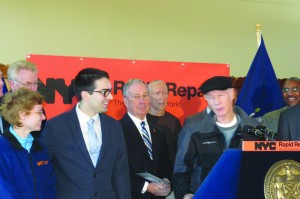 Bloomberg was joined on Friday morning at the American Legion Hall on Cross Bay Boulevard by Deputy Mayor for Operations Cas Holloway, Director of the Mayor’s Office of Housing Recovery Operations Brad Gair, Director of Rapid Repairs Kathryn Mallon and FEMA Federal Coordinating Officer Michael Byrne, to announce what added up to be a significant mark of contributions by the city in the post Sandy cleanup and restoration effort. Also joining Bloomberg were Congressman Gregory Meeks, Council Members Eric Ulrich and Donovan Richards and residents whose homes were repaired by the NYC Rapid Repairs program.

A first of it’s kind program in this city or any other, Rapid Repairs was instituted in the immediate aftermath of the storm in order to provide free repairs to thousands of homeowners left without heat, power and hot water following the storm.

In tallying its results Mayor Bloomberg was pleased to report that work had been completed on 99% of homes and had helped more than 90,000 families—approximately 54,000 people—to return to their homes following the devastation they suffered.

The basic operating premise of the program was that the city hired contractors and construction workers to make emergency repairs to residential properties affected by the Hurricane. 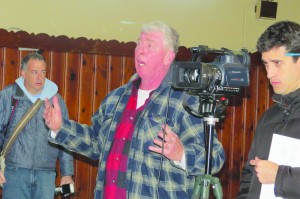 With the completion of all scheduled repairs on the immediate horizon, the city intends to continue to offer guidance to homeowners through NYC Rapid Repairs After-Care.

In addition, the Mayor detailed the City’s plans

for a $1.77 billion in Federal aid to help residents as well as business in their recovery efforts.

He went on to announce that the Mayor’s Fund to Advance New York City is dedicating $10 million in private donations to assist one- and two-family homes in need of minor-to-moderate, non-structural repairs.

“In the four months since it launched, Rapid Repairs has restored essential services to more than 20,000 residences, allowing nearly 54,000 New Yorkers return to their homes where real recovery can begin,” said Mayor Bloomberg. “It’s a new model for disaster recovery that we proved can work, and I want to thank FEMA Director Craig Fugate, FEMA Coordinating Officer Mike Byrne and the entire team at FEMA who worked with us to make it happen. We still have a lot of work ahead of us to help the families and businesses impacted by Sandy to make a full recovery, and the first round of Federal aid will go a long way toward achieving that goal.”

The mayor offered the floor to several Broad Channel residents who were eager to share individual stories and to express their gratitude for all the help offered by Rapid Repairs.

“I’d like to thank the mayor,” Mundy began. “Rapid Repairs was extremely successful here in Broad Channel. Close to 450 families got back into their homes through the program.” And Mundy pointed out the magnitude of the accomplishment due to the fact that Broad Channel was an island with no natural gas. “That made the situation even more complicated and much worse,” said Mundy. “But they worked it out and at the same time they addressed the needs of the handicapped and those folks suffering with cancer as a priority.”

Up to follow was life-long resident Robert Keith, who painted a clear picture of both devastation and subsequent relief. “Tuesday morning when I got up, I had 6 feet of water in my house. The boiler went under, the electrical panels were under. I had no heat , no running water, no light, ” Keith said. “I slept in my car to keep warm and showered in the volunteer fire department. Then Rapid Repair came in like army ants and locusts,” after being forced to pause in response to a burst of laughter over his description, Keith continued. “They visited and surveyed every home in the channel . They started early in the morning and they worked through the night. When all was said and done, I had heat, hot water and electric. I couldn’t be more thankful.”

His sentiments were echoed by other residents one of whom, Robert Eckert, offered thanks to everyone but was diligent in singling out one person in particular—Rapid Repairs Director, Kathryn Mallon.

Eckert offered to take off his hat to “the small woman who filled some very big shoes. She did an absolutely fantastic job,” he said. But her boss could not resist the opportunity to offer up a joke—turning to face Mallon the mayor said, “that’s so nice to hear, but you’re not getting a raise. Now get back to work.”

Although satisfaction was the prevalent theme of the morning among those present, well known Broad Channel activist and long time resident Ed O’Hare raised a question that appears to be what some see as a lurking demon on the horizon—the newly assigned flood zone designations and the potential schemes for raising of homes.

But for now questions surrounding the designations and the guidelines and future of the national Flood Insurance Program remain not only unanswered but that which is a matter of great concern.