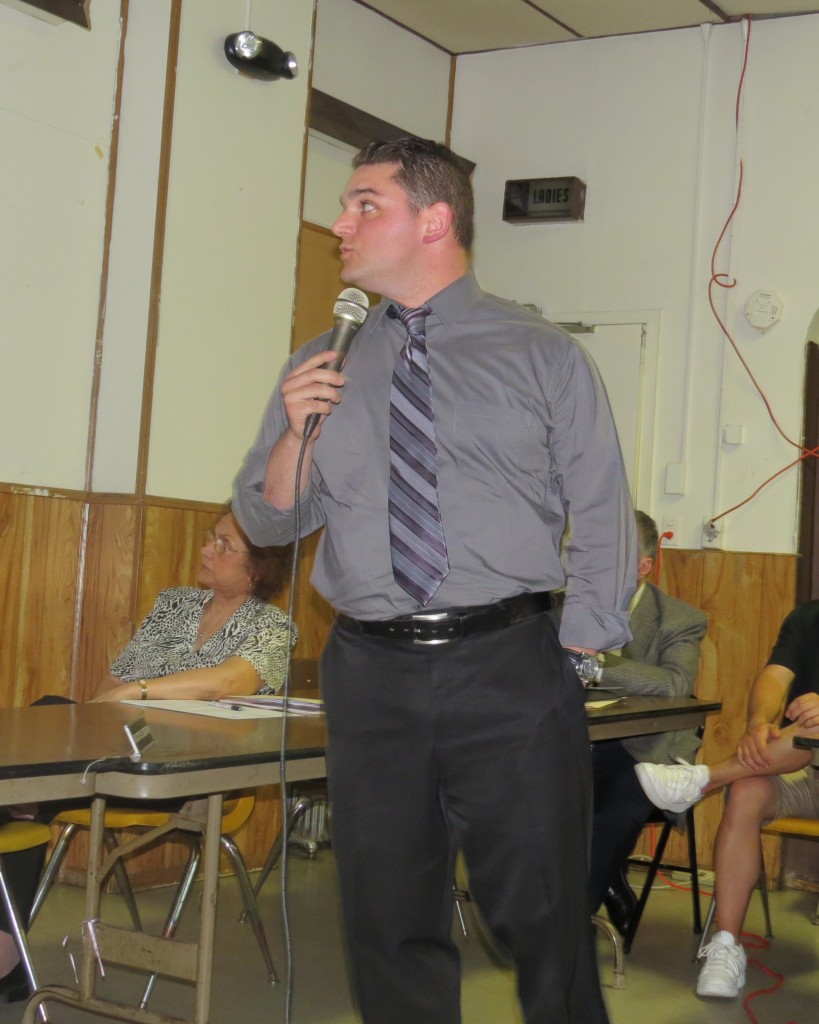 Al Silvestri, of the city Department of Transportation, discusses a proposal to add parking spots to 156th Avenue between 77th and 78th streets in Lindenwood. Anna Gustafson/The Forum Newsgroup

While Community Board 10 members said at their meeting last week they are pleased the city Department of Transportation is looking into additional parking for the congested 156th Avenue between 77th and 78th streets in Lindenwood, they voted to have DOT officials to take a closer look at their proposal.

Residents who spoke at last Thursday’s meeting said they supported the city’s plan to make parking less of a headache in the area, but asked that the DOT implement parallel parking spots along the north side and angled spots on the south of 156th Avenue. Al Silvestri, a DOT representative who attended the meeting, said the city has proposed doing the opposite – placing parallel parking along the south side and angled spots along the north.

The city first began looking into creating additional spots – meant to alleviate severe parking problems that residents said they have dealt with for far too long – following a request from the office of Councilman Eric Ulrich (R-Ozone Park).

CB 10 members pointed out that the angled parking proposed by the city would be on the same side as residences’ driveways, which they argued could create a logistical nightmare for drivers trying to exit their homes.

“That side of the street has cars that are pulling out,” said CB 10 member Joann Ariola. “You really need to take a look at flipping it and putting angled parking on the other side. That would be much safer.”

Silvestri said his department would review board members’ suggestions.

Tom Smith, of the city Department of Planning, also gave a presentation on the city’s proposal to rezone approximately 530 blocks in Ozone Park, as well as part of Woodhaven.

“This is second place for the largest rezoning of the Bloomberg administration,” Smith said. “It’s massive – just massive. It goes into CB 10 and CB 9.”

The city’s proposal – the first of its kind since 1961 which stemmed from concerns from both community boards, elected officials and civic organizations – would rezone the area generally bounded by Rockaway Boulevard, Atlantic Avenue and 101st Avenue to the north; the Van Wyck Expressway and Lefferts Boulevard to the east; the Belt Parkway to the south; and the Brooklyn borough line to the west.

“We want to preserve that area’s character,” Smith said.

Smith continued to say that the recommended zoning changes would “reinforce the area’s predominant one- and two-family residential character and direct moderate amounts of new residential and mixed-used development to locations along the area’s main commercial corridors and near mass transportation.”

Area elected officials and civic leaders have praised the rezoning proposal, and Ulrich has said it would allow for more of the economic development projects that people want to see, such as restaurants, coffee houses and bookstores.

“You wouldn’t see something like a Costco or Home Depot pop up,” Ulrich said in a previous interview.

The city Planning representative also noted that the study builds upon the Woodhaven-Richmond rezoning that was adopted last year. That rezoning covered 229 blocks and also aimed to protect one- and two-family houses while encouraging more commercial development along such areas as Jamaica and Atlantic avenues.

Smith said his department is in the “consensus building phase” of the rezoning proposal, which includes attending civic and community board meetings to receive feedback about the plan.

Eventually, there will be an environmental review, which will, for example, “make sure schools won’t be overburdened and that traffic would be alright,” Smith said.

Community boards 9 and 10 will hold hearings on the proposal, and ultimately it will go to the City Council for a final stamp of approval.