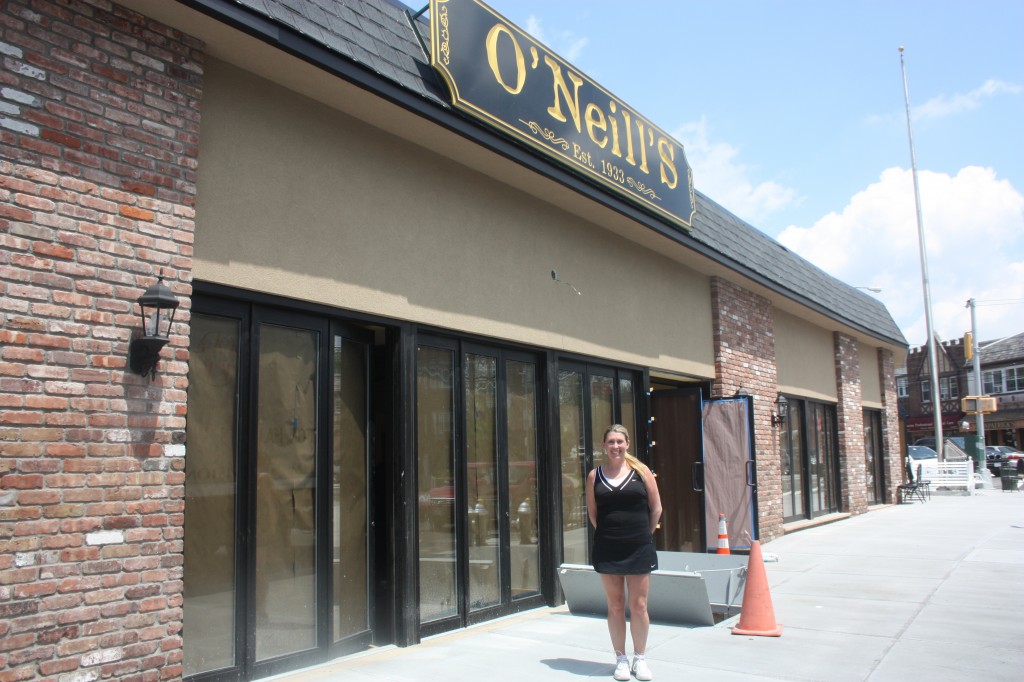 Tara O'Neill Pyle, the daughter of George O'Neill, is looking forward to celebrating the reopening of the community mainstay O'Neill's in Maspeth around the end of June or beginning of July.

Spreading his hands towards a room abuzz with construction work, George O’Neill said he is counting down the days until his Maspeth restaurant – O’Neill’s, a community mainstay that has had Mets players tend bar and held fundraisers for the spouses of police officers killed in the line of duty – reopens within the next several weeks.

“I can’t wait to see everyone – all the friends, all the customers, everyone,” said O’Neill, whose 53rd street restaurant was destroyed by a fire in May 2011. “People are excited. Car after car will drive up to the restaurant and people will ask when we’re reopening.”

The O’Neill family hoped they would be able to reopen the establishment, located at 64-21 53rd St., on June 14, but the city has yet to give its final stamp of approval. Once the city inspects the building’s sprinkler system, which is expected to happen within the next couple of weeks, the much beloved eatery will, once again, be open for business.

“It really is a neighborhood place – it’s a big part of the community,” said Tara O’Neill Pyle, George O’Neill’s daughter and the wife of Danny Pyle, who runs the restaurant alongside his father-in-law. “People here consider it a landmark.”

Originally opened by O’Neill’s father, also George O’Neill, in 1928 under the name the Plateau Tavern, the restaurant has gone on to become a wildly popular hangout spot for everyone from neighborhood regulars to members of the 1986 Mets team that clinched the World Series.

“They ran out of their locker room and to O’Neill’s, and people came in and said, ‘Wait a minute – are those the Mets tending bar?’” laughed O’Neill, who got his start in the kitchen while serving in the Army in the mid-1950s.

Throughout the years, as the Plateau Tavern evolved into O’Neill’s, the establishment would do more than flip burgers and serve up cold beers – they held fundraisers for countless causes, including to help individuals foot medical bills and for widows whose husbands were police killed while serving their city, and they sponsored countless sports teams, from Little Leagues to softball and basketball.

George O'Neill's restaurant has been in their family since his father opened what was then called the Plateau Tavern in 1929.

Perhaps more than anything, O’Neill’s has been a place synonymous with community – with people coming together to celebrate the good – the bridal showers, the weddings, the births – and to support one another when hospital trips leave paralyzing medical bills or when loved ones die. And this, O’Neill said, is the way his father wanted it – he would have wanted to know that, while a blaze devastated the restaurant, people throughout Queens – and beyond – have since clamored for its reopening. Thousands of people, including a bevy of elected officials, have joined a Facebook group for O’Neill’s, and the restaurant owner said not a day goes by that someone does not ask him when the doors to his eatery will once again be flung open.

The newly renovated spot will be able to seat more customers than before – the addition of a new catering hall will hold about 300 people. And, O’Neill said, it will boast what he calls “the best food in New York.”