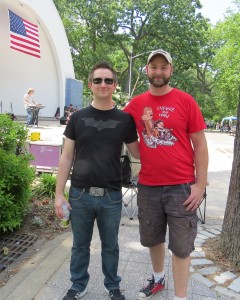 The first annual Forest Park Rock Fest drew people from throughout Queens, and the rest of the city, on Saturday, when everyone from toddlers to senior citizens cheered on the four bands that came together under the vision of Woodhaven native Greg Cerar.

Cerar, a Woodhaven native who plays the drums in the alternative hard rock band The Boom Section, said he was thrilled to organize the event in Forest Park’s band shell.

“I used to come to the park with my dad when I was a kid, and I’d come here with my friends when I was older, and we’d pretend we were putting on rock shows,” said Cerar, who practices with his band in Howard Beach – where his parents now reside. 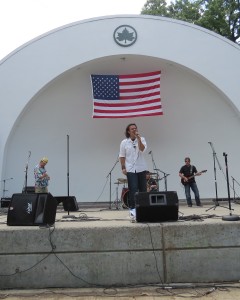 StillTheVizitors was one of four bands that played for Saturday’s crowd, which included music lovers from throughout the borough – and beyond.

The bands that entertained Saturday’s crowd represented different types of rock and roll – alongside The Boom Section, there was StillTheVizitors, who regaled people with classic blues, Daniel Tighe got people tapping with his alternative country, and SystemInChaos played darker rock songs.

Kristin Robles, of Jamaica Estates, whose husband sings in the band StillTheVizitors, came to the concert with the couple’s 2-year-old daughter, Talia Ann. 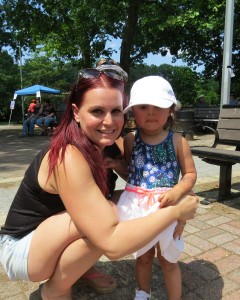 Kristin Robles and her daughter, Talia Ann Robles, 2, of Jamaica Estates, were excited to see their husband and father, Mario Robles, the lead singer of StillTheVizitors, rock out on Saturday.

“It’s awesome to have rock music in general because it’s kind of disappearing,” Robles said. “To have a rock fest is very valuable – hopefully this will happen every year.”

Astoria resident Dawn Walsh-Johnson also had her 2-year-old daughter, Dasha Johnson, with her – and she said there was no way she would rather spend her day than listening to free music.

“It brings people together,” she said.

And for Carmella and Tom Cerar, Greg Cerar’s parents, the day was nothing less than a chance to watch their son’s dreams play out.