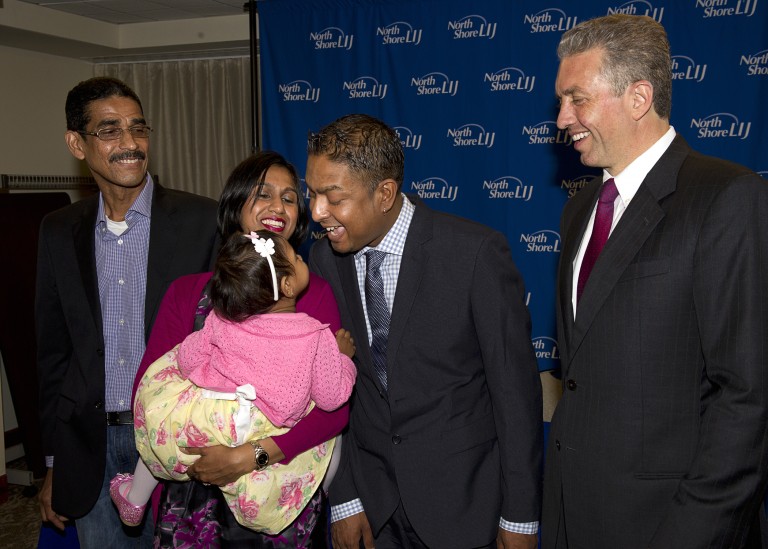 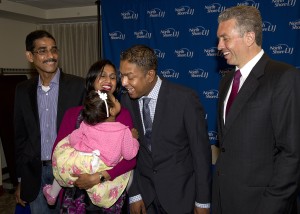 There comes a time when a father doesn’t have to think twice about helping his son.

For Ronald Burke, 55, that moment came when he discovered the kidney his son, Leonard Burke, 32, received from his wife in 2010 was failing.

“I didn’t hesitate; it wasn’t a scary thing for me,” said Ronald Burke, who donated his kidney to his son during a transplant at the North Shore University Hospital in Manhasset on June 3 – just days before the two men celebrated Father’s Day with their family, including Leonard Burke’s wife, Rhonda Burke, and their 18-month-old daughter Isabel, in their Richmond Hill home.

“It felt really wonderful to know you can give someone a second chance to live a normal life – especially someone very dear to you, like your son,” Ronald Burke said at a press conference held at a North Shore facility last Friday. “This will be the most beautiful Father’s Day I’ve ever spent in my life.”

For the son, the gift was overwhelming – and a constant reminder of the support he has received from family since receiving news in 2008 that his kidneys were failing because of hypertension. His wife turned out to be a perfect match and could donate a kidney to her husband – to whom she has been married 11 years and who she first met while they were growing up in Trinidad.

“We’ve known each other since the age of 12 – we’re a match in every way,” Rhonda Burke said.

The first transplant seemed to be a success, elating the young couple who wanted to start a family. Their daughter was born just a few days before Thanksgiving in November 2011. However, the family was shocked to discover this March that the transplanted kidney was failing.

“My dad said, ‘I’m going to give you a kidney, and that’s it,’” Leonard Burke said of his father’s reaction when the family learned of the failing transplant.

Ernesto Molmenti, the North Shore University Hospital Transplant Center surgery director who worked with the Burke family, said it was unclear as to why the first kidney transplant failed but said the second one went smoothly and they will continue to monitor Leonard Burke’s progress.

Each of the Burke family members who have been involved in the transplant process said it was surprisingly easy.

“I was up and walking around that night,” Leonard Burke said.

While the entire process has been a difficult one – especially as Leonard Burke battled fatigue while being on dialysis and working full time, but the family said it has cemented the strength of a family that has always been there for one another.

And even though 18-month-old Isabel is a little too young to really understand what is happening, her mother said she already has learned an important lesson.