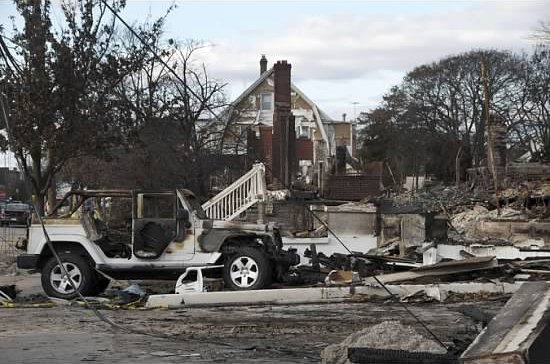 A lone, charred staircase is a reminder of a home that once stood in Breezy Point before it was destroyed in the Hurricane Sandy blaze. Photos Courtesy of Jason Adams

Billy Heeran wants his life back.

He wants to know what it is to have the business his father started in 1980, Harbor Light Pub, open its doors on the corner of Beach 130th and Newport Avenue again – to be the place where Rockaway residents go to laugh and cry and heal.

He wants the seats to be there, the food ready, the drinks cold, for those who have seen their lives turned upside down time and again – in the Sept. 11, 2001 terrorist attacks, when Flight 587 crashed into Belle Harbor on Nov. 12, 2001 and when Hurricane Sandy hit the city last October, decimating homes and businesses and devastating a peninsula until it was unrecognizable by the storm’s end.

But Harbor Light Pub exists, as so many places in Rockaway now do, only in memory, the community mainstay’s walls, and everything inside of them, reduced to ashes in the fires that swept through Breezy Point and Rockaway Beach as Hurricane Sandy paralyzed the city.

Approximately 150 homes burned in the blaze – unreachable by firefighters because of massive flooding from Sandy – and last week, 120 homeowners and business owners filed a lawsuit against the Long Island Power Authority and National Grid, alleging the company’s failure to de-energize the power grid to the Rockaway peninsula before Hurricane Sandy hit caused one of the worst residential fires in the city’s history.

“Had LIPA and National Grid acted responsibly in preparing for the storm, my clients would be living in their homes with all of their life’s possessions and these two communities would not look like a war zone,” said Keith Sullivan, an attorney with the firm of Sullivan and Galleshaw, LLP, which filed the lawsuit in Queens Supreme Court on behalf of the 120 homeowners.

While LIPA and National Grid did not return requests for comment, the companies told the Daily News that they do not believe “these claims have merit.”

Sullivan noted that Fire Island was de-energized by LIPA and was protected from the fires that raged in Breezy Point and Rockaway Beach.

“Industry protocol called for de-energizing the system – however, LIPA and National Grid chose to keep dangerous electricity flowing into the Breezy Point and Rockaway Beach communities during the worst storm in the area’s history,” Sullivan said. “No one was home in the houses where the fires started. Electricity and salt water is a deadly combination; we would have thought the power companies knew this already.”

Breezy Point residents are suing LIPA and National Grid over the Hurricane Sandy fires that tore through their neighborhood.

The attorney said he is seeking at least $80 million in damages for the plaintiffs – something he hopes could help the residents return to homes and businesses. Not one of Sullivan’s clients has been able to rebuild their home yet, and Heeran said he wants nothing more to start construction on his pub – but in order to do so he has to take out a loan for millions of dollars.

“No one’s looking to make money off this lawsuit,” said Heeran, who owns the pub with his father, Bernie; his brother, Sean; and another individual, Billy Whalan. “We just want to get our business back, our homes back. We shouldn’t have to take out another mortgage for that. My dad worked his whole life to pay this off, and now we’re back to square one?”

Sullivan, who lives in Rockaway, said the suit is not only an attempt to secure money for residents who have hemorrhaged money because of the hurricane, but aims to “restore these folks – to make them whole.”

“What can never be brought back is the memories that lived in those houses – the photographs of grandparents now passed one, family heirlooms – the intangibles, we’ll never get those back,” Sullivan said.

“But this is to make sure justice is served – this was an injustice,” he said. “This was an avoidable travesty.”