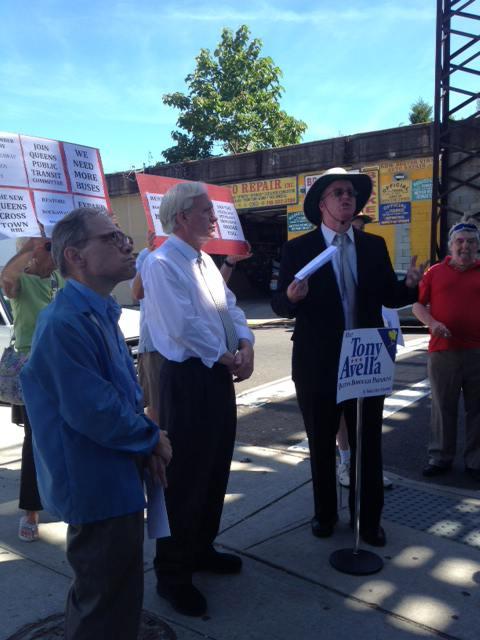 Queens residents hoping to see the rebirth of the long-dormant Rockaway Beach Rail Line that, decades ago, ran from Rockaway to Rego Park, got a boost from state Sen. and borough president candidate Tony Avella (D-Whitestone), who on Monday threw his support behind reactivating a line that advocates say will help to jumpstart the peninsula’s floundering economy, as well as significantly cut down on travel times through much of the borough.

State Sen. Tony Avella, center, joined Rockaway and South Queens residents for a rally in Ozone Park on Monday and called for reviving the Rockway Beach Rail Line that has been abandoned for decades. Photo Courtesy of Philip McManus

Avella joined residents from South Queens and Rockaway for a rally in Ozone Park Monday morning in favor of reviving the service that is also known as the White Pot Junction Line. The line, which, in addition to Rockaway and Rego Park, traveled through Middle Village, Woodhaven, Ozone Park and Howard Beach, was once owned and operated by the Long Island Rail Road but was sold to the city in 1962. The city abandoned it and, over the past five decades, the line has fallen into disrepair, its tracks covered by unruly weeds and graffiti.

“Much has changed in the last 50 years,” Avella said. “The Rockaways has seen a tremendous influx of residents and tourists, adding a significant burden on the few transportation lines being currently offered. The peninsula provides thousands of people with direct access to the Rockaway beach, oceanfront properties and the successful racino at the Aqueduct Racetrack, yet public transportation options remain very limited. This community has wanted too long.”

A number of elected officials have also thrown their support behind reopening a train line between Rockaway and mainland Queens, including Assemblyman Phil Goldfeder (D-Rockaway Park) and U.S. Rep. Hakeem Jeffries (D-Queens, Brooklyn) – both of whom have lamented the mass transportation options available to Rockaway and South Queens residents. A trip on public transportation from the Rockaways to, say, Bayside can take as long as two and a half hours – as can the trip into Manhattan. This, officials and other advocates have said, proves to be a serious economic blow to Rockaway, which is still struggling to get on its feet after Hurricane Sandy.

However, not everyone is happy with the idea of reactivating the rail line, and a group of residents have called for 3.5 miles of the abandoned rail track to be transformed into a parkland similar to Manhattan’s High Line.

Supporters of what has been deemed the “Queensway” have said such a transformation would benefit hundreds of thousands of residents and would provide an easily accessible bikeway on which individuals could commute to work.

Avella was the only of the three borough president candidates at this week’s rally, though one of the event’s organizers, Rockaway Park resident Philip McManus, said he had invited the others running to replace Queens Borough President Helen Marshall – former City Councilwoman Melinda Katz and Councilman Peter Vallone (D-Astoria).

When this newspaper reached out to the other two candidates about their thoughts on the rail line, only Katz responded.

“We have a transportation crisis in the Rockaways, which needs to be addressed immediately,” Katz said. “We need to keep the ferry running and work to expand bus service. The Rockaway Rail Line reactivation and the Queensway proposals are both ideas that are worthy of serious consideration. However, I have safety and viability concerns about both proposals that must be addressed. This issue is not going to be resolved by demagoguing, but by generating real community input and cooperation.”

Rockaway Park resident Philip McManus, who recently founded the Queens Public Transit Committee to fight for, among other things, the reactivation of the Rockaway railroad, said, as others have, that the revival of the line is crucial to Rockaway’s financial well-being.

“Commuters and tourists from across the region would have another option to use the RBL to live, work, learn, shop, eat and play in Queens,” McManus said. “It would improve Queens cross-town transit and reduce travel times. The RBL would increase business, employment, economic development, property values, tax revenues and educational opportunities for all of Queens.”