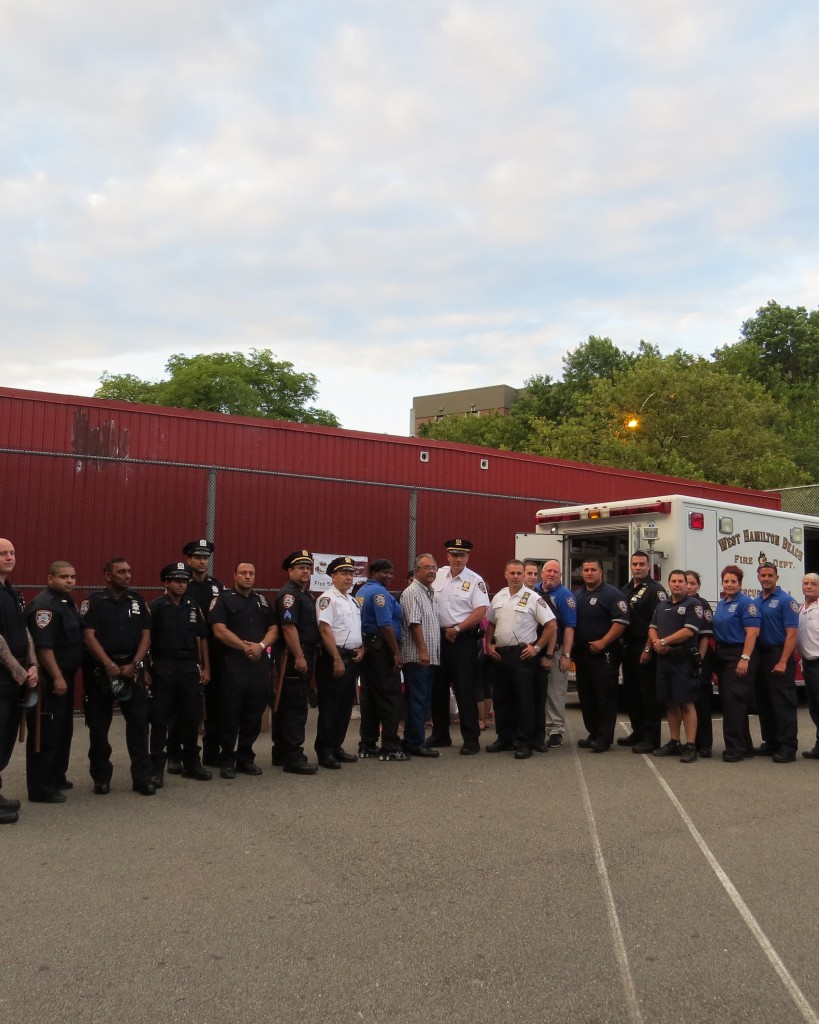 Police, other emergency responders and civic leaders gathered at PS 232 in Lindenwood for the National Night Out Against Crime.

Hands clenched around a plaque of appreciation, 106th Precinct Community Council President Frank Dardani looked at the row of police before him and said their response to Hurricane Sandy pointed out what South Queens residents have long known: The men and women in uniform are nothing less than heroes. 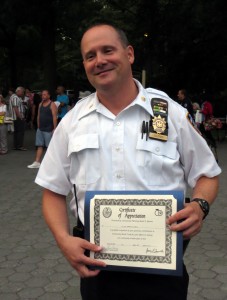 Deputy Inspector Henry Sautner, the commanding officer of the 102nd Precinct, received a certificate of appreciation for the hard work he, and his officers, have done in the area.

“They worked long, hard hours and many days and weeks,” Dardani told the hundreds of people who gathered at PS 232 in Lindenwood for the 106th Precinct’s National Night Out Against Crime event on Tuesday evening. “Many of the men and women on our streets and flooded neighborhoods … had families, homes and neighborhoods just as badly slammed as ours, but they were here serving us.”

Across the country, police, residents and elected officials celebrated the National Night Out Against Crime, which is meant to create bonds between communities and cops that civic leaders and officers said is crucial when fighting the illegal activity plaguing neighborhoods. Each precinct in Queens – and throughout the five boroughs – held an event. In South Queens, the 102nd Precinct sponsored a celebration in Forest Park, at the corner of Park Lane South and Myrtle Avenue. 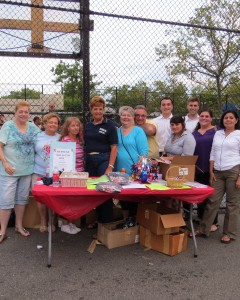 Members of the Richmond Hill South Civic Association spent their evening talking to people about the benefits of their organization.

“It’s very important for the community to meet with officers in our precinct – we have very little contact now that there’s not community policing,” Dardani said in reference to a model of policing by emphasizing partnerships in a neighborhood. “It’s why we brought out all the different units, like domestic violence. It’s so important that people know they can speak with these officers.”

102nd Precinct Community Council President Latchman Budhai praised the police in his area, saying “they are on the ball and out on the street.”

Budhai said he hoped the National Night Out event would inspire residents to be more mindful of their surroundings – and keep an eye out for crime.

“A major issue is having extra eyes on the outside,” Budhai said. “Manpower is limited, and it’s imperative a relationship be created between the police and others.” 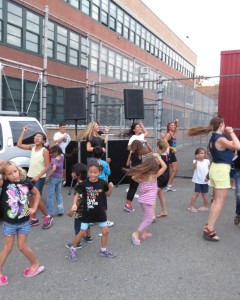 Children and adults have fun dancing as a dee-jay spins some music at PS 232.

Simcha Waisman, of the One Stop Richmond Hill Community Center, also stressed the need for residents to become more engaged partners when addressing crime – and he also called on One Police Plaza to bring more cops to the 102nd.

The events included music, dancing and a variety of other activities, including a bouncy castle for children and a wide variety of information from a range of community organizations that set up tables at the celebrations.

“It’s very important for us to let the community know there are organizations they can go to besides the elected officials,” said Richmond Hill South Civic Association Margaret Finnerty, whose group manned a table at the 106th event. “They can come to us, and we can fight for them. If you come to a meeting, you’ll find you’re not the only one with the problem you’re having.” 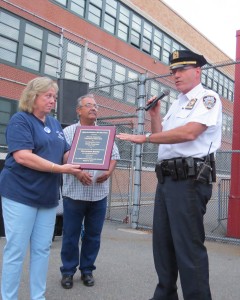 Many of those who came out to the events said that it was key to have children there, having fun, in order to get them to associate positive feelings with the NYPD. And, according to the younger residents there, they were thrilled to spend time with the men and women in uniform – as well as down some ice cream and play games.

“You get a lot of enjoyment from being out in nature,” said Corey Farrell, 10, of Richmond Hill, who attended the program with his brother Cade Farrell, 11.

“It’s fun to come out for the music, be in the park and see the police,” Cade agreed.