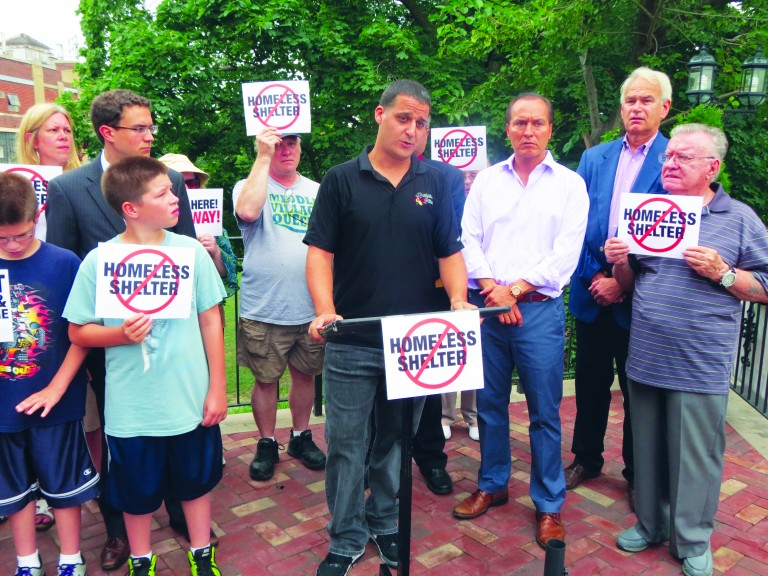 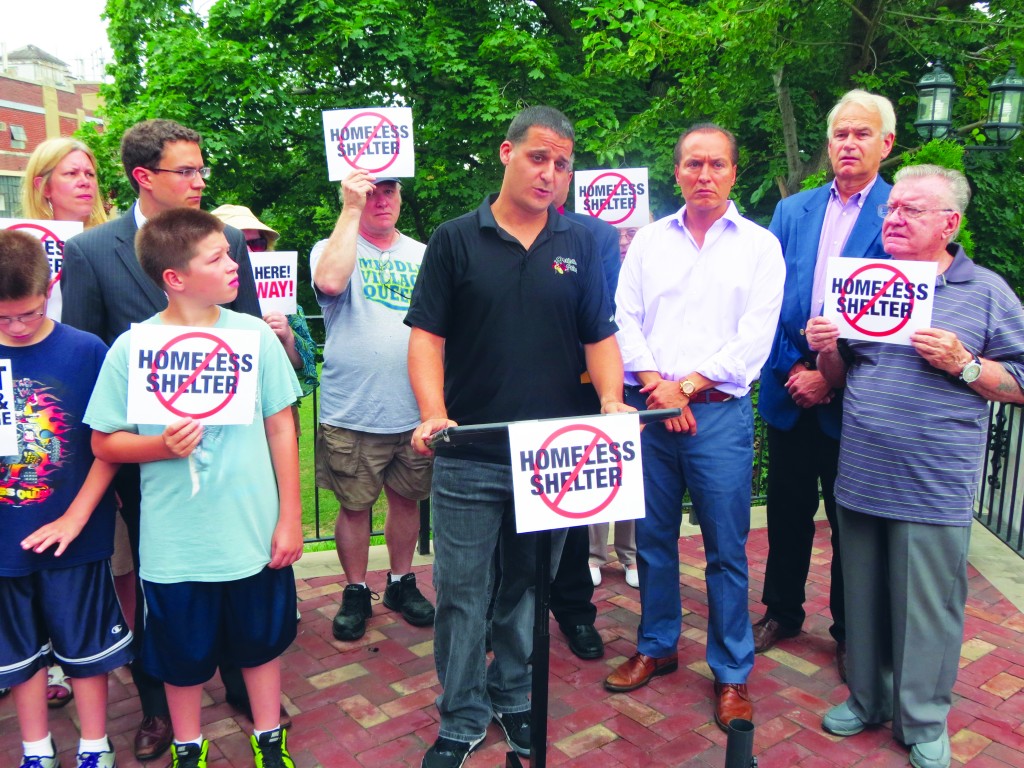 Fabio Dimaria, one of the owners of Saverio’s, center, joined Councilman Peter Vallone, third from right, and Juniper Park Civic Association President Bob Holden, second from right, among other residents and civic leaders, to denounce a proposal to operate a homeless shelter on the border of Glendale and Middle Village. Anna Gustafson/The Forum Newsgroup

Civic leaders, business owners and an elected official rallied last week against a proposal to operate a 125-family homeless shelter in a former airplane factory on the border of Glendale and Middle Village, saying the plan would overburden already crowded classrooms and could drive away customers from shops that have recently opened nearby.

“If you place a homeless shelter with 125 families here, where’s the transportation?” Juniper Park Civic Association President Robert Holden asked at the rally held last Friday outside the site of the proposed shelter, which is now an abandoned factory at 78-16 Cooper Ave. in Glendale. “There are no subways near here… It’s an environmental nightmare – it needs remediation and it’s going to cost a lot.

“Why not put senior housing there?” Holden continued. “Instead we get this shoved down our throat?”

Samaritan Village, a nonprofit, sent a letter last month to Community Board 5 Chairman Vincent Arcuri to notify members that it had submitted a proposal to the city Department of Homeless Services to operate “transitional housing” at the former factory.

“As you know, recent years have seen an increase in the number of families requiring transitional housing, despite the significant strides that have been made to increase the availability of affordable housing for New Yorkers,” Samaritan Village’s letter said.

The document went on to say that such facilities are especially necessary in Queens, which has about 25.6 percent of its rental units priced at less than $1,000 a month – whereas the citywide average is 37 percent. Additionally, home foreclosure starts increased by 24 percent in 2012 compared to 2011, and the poverty rate in Queens was 15.8 percent in 2011, compared to 12.2 percent in 2006.

Under the proposal, which is now being reviewed by the DHS and must receive the stamp of approval from the department and Mayor Bloomberg, Samaritan Village would “provide an array of on-site services and off-site service linkages to provide 125 families with the needed assistance to return to, and maintain, independent living.”

According to the plan, the nonprofit would provide on-site security around the clock, every day of the week, and there would be access control, visitation and curfew policies.

“This community has been taking care of the homeless for a long time – in small shelters in churches and other places,” Councilman Peter Vallone (D-Astoria), who helped to organize the rally, said. “No neighborhood can absorb 125 homeless families.”

Such an influx of children would overwhelm the three nearby schools – one public and two private – residents said.

“Our schools are overcrowded,” said area activist Tony Nunziato. “We have no trains, and our buses are overcrowded. We need something that will bring in jobs to the neighborhood.”

Holden and Vallone suggested that the ex-factory instead be turned into senior housing.

“They deserve to be here,” Vallone said of the neighborhood’s elderly residents. “If they can remediate this, they should put seniors there.”

If DHS approves the proposal, the city would pay for remediation costs – which is why some have said the owner wants to work with the city instead of with the private companies that have expressed interest in renting the space. The property owner, Michael Wilner, could not be reached for comment.

Fabio Dimaria, one of three people who owns Saverio’s Bistro and Artistic Stitch, both of which are located next to what could become the shelter, said he worried the site would drive away customers.

“We’ve put everything we have – our lives –  into this,” said Dimaria, a Middle Village native who still lives in the neighborhood. “It would hurt us. A lot of people won’t come to a restaurant next to a homeless shelter.”