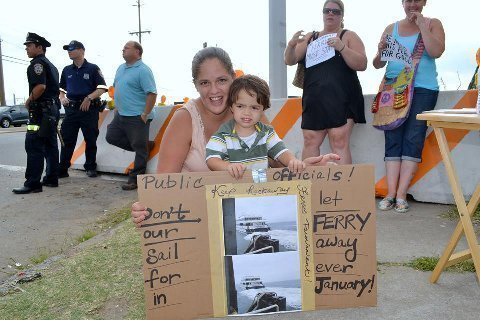 Residents from throughout Rockaway and South Queens gathered to send City Hall a message: Keep the ferry running from the peninsula to Manhattan permanent. Photo Courtesy Laura Deckelman

Waving signs emblazoned with statements like, “ridership is high now – keep our ferry,” and “don’t let our ferry sail away for forever,” Rockaway and South Queens residents said at a rally last Thursday that they plan to keep their voices raised until City Hall makes the ferry that travels from the peninsula to Manhattan permanent.

“We’re here to fight to keep the Rockaway ferry forever – that’s what we want,” said Phillip McManus, a Rockaway activist who recently founded the Queens Public Transit Committee to fight for better mass transportation in the borough.

The ferry, which costs $2 for the 35-minute trip from Rockaway to Manhattan and vice-versa, was re-established after Hurricane Sandy destroyed the A-subway line and left Rockaway residents with few options for mass transportation. Mayor Bloomberg announced late last month that the service, which is much faster than the 90-minute trip on the A line from Rockaway to Manhattan, will run through Jan. 31, 2014 – longer than originally planned.

Maintaining a permanent ferry service, residents said, would give the Rockaways a needed economic boost, allowing people to much more easily access the peninsula and its beaches ad shops.

Joe Hartigan, a Rockaway activist, suggested that the city might be more easily persuaded to keep the ferry running if they changed its route so it took travelers to and from JFK Airport.

“If we can get it into Kennedy Airport, it can be running by us all day long,” Hartigan said at at the rally, which organizers taped and put on YouTube.

“That’s the only way anything ever gets done – when people speak up for themselves, when they fight for their communities and they let politicians and the media and everyone else know that they’re not going to go away until they get what they’re entitled to – that’s better transportation, access to good-paying jobs and a ferry,” Ulrich said at the rally.

Goldfeder too praised the residents for being vocal about their position.

Lew Simon, a Democratic District Leader running against Ulrich for the 32nd Council District in November’s general election, also said he has made a “personal commitment this ferry will stay alive.”

State Sen. Joe Addabbo Jr. (D-Howard Beach) said he hopes both the city and the state would back the ferry service financially.