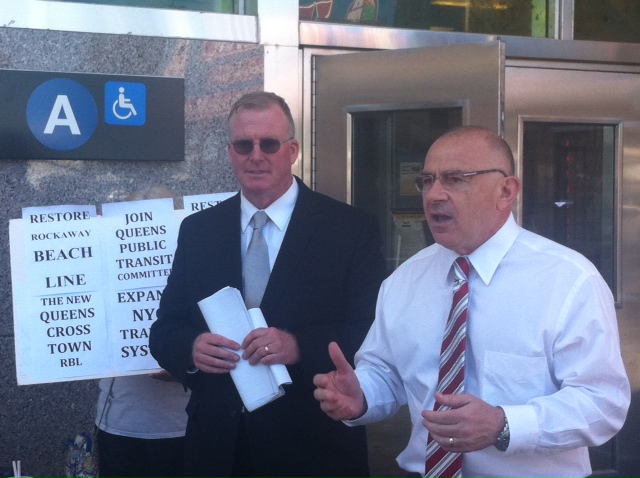 Mayoral candidates have sought support from Queens residents and groups before the Sept. 10 primary, and Sal Albanese, pictured at right, has landed the backing of Rockaway residents, including Queens Public Transit Committee Founder Phil McManus, pictured at left. File Photo

Queens may be considered the scrappy underdog when it comes to city politics – and while many of the mayoral candidates have adopted a Manhattan-centric approach to their campaigns, this borough dominated by middle-class families shouldn’t be discredited when it comes to ushering in the city’s next head honcho.

Politicians in the past, including former Mayor Rudy Giuliani, have said they would have never landed in the city’s highest office had it not been for Queens – a borough that, with its solidly working- and middle-class families, as well as a graying population and an influx of immigrants, has proven to be a boost for candidates on both sides of the aisle.

And, in a city with historically low voter turnout, according to a report issued last year by the city Campaign Finance Board, the fact that Queens residents tend to turn up at the polls more than their counterparts in other boroughs means the region could play a significant role in this year’s election. A number of political insiders have predicted that, in a city more than 8 million people – and about 4 million active voters – fewer than one million people may turn out to vote in this non-Presidential election year. This means a neighborhood like Forest Hills, which has one of the highest rates of primary voters, hovering around 40 percent, could give a big boost to whoever wins the Sept. 10 election.

“Queens is a very populous borough and has a lot of Democratic voters,” said Queens College Political Science Professor Michael Krasner. “So it really comes down to the general election. We’ve obviously had kind of a run by the Republican Party, from Giuliani through Bloomberg, so Queens voters have been more responsive to the more conservative appeals.”

While the mayoral candidates have held more official campaign events in Manhattan than in any other boroughs, except for Sal Albanese, who has spent more time in his home area of Brooklyn than elsewhere, Queens has still ranked for those vying to replace Bloomberg.

Liu, a former Councilman who represented Flushing and still lives in the neighborhood, has visited Queens more times for official campaign events – 207, to be exact – than any of the other candidates. Quinn comes in second for the number of Queens campaign events at 74. The candidates have landed various support from Queens officials and civic leaders, from a number of Rockaways groups, including the Queens Public Transit Committee, backing Albanese; to Councilman Eric Ulrich (R-Ozone Park) endorsing Joe Lhota; and Juniper Park Civic Association President Bob Holden saying at a previous meeting that he is backing Bill Thompson, as is the influential Rev. Floyd Flake of southeastern Queens. Liu, despite his legal troubles, still seems to have plenty of support in his home base of Flushing. Still, it is de Blasio who seems to have captured Queens, at least according to recent polls.

Krasner said Weiner, who once lived in, and represented in Congress, Forest Hills, cannot bank on the area backing the disgraced politician in the election.

“It’s hard for a candidate to gain that trust back from the public,” the Queens College professor said. “It’s just really hard.”

By Anna Gustafson and Will Sammon