Queens County Democrats threw their support behind a mayoral candidate they did not endorse in the primary – Public Advocate Bill de Blasio – Monday afternoon, when the Brooklyn politician vowed to reach out to the Queens residents he said had long been ignored by the Bloomberg administration and slammed his opponent for accusing him of being a “Democratic socialist.”

“This is going to be a major building block in our victory,” de Blasio said of the endorsement at a press conference outside Queens Borough Hall that drew a sea of Democratic legislators and civic leaders.

Many of those who spoke, including de Blasio, emphasized the party’s “unity” in backing the Democratic candidate, who is running against Republican and former Metropolitan Transportation Authority Chairman Joe Lhota – and who did not land the backing of the party during the primary that pitted him against eight others. The county’s Democrats had endorsed the race’s once frontrunner, City Council Speaker Christine Quinn (D-Manhattan), who came in third, behind de Blasio and former City Comptroller Bill Thompson, in the Sept. 10 election.

“No Democrat, that I know of, in this borough is behind any other candidate,” said U.S. Rep. Joseph Crowley (D-Queens, Bronx), chairman of the Queens County Democrats. 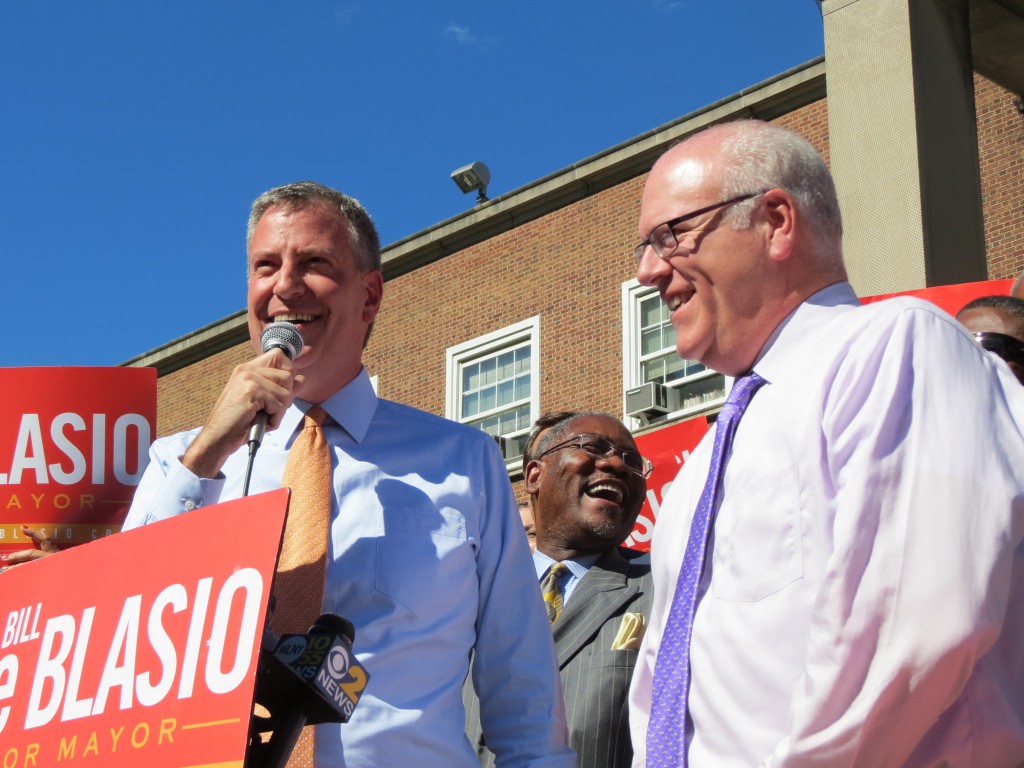 Crowley specified that while a couple legislators were not present at the press conference – including his cousin, Councilwoman Elizabeth Crowley (D-Middle Village), and Councilman Danny Dromm (D-Jackson Heights) – de Blasio still had their support.

“He has fought his entire career for the least amongst us,” Crowley said of the city’s public advocate who lives in Park Slope and once represented parts of Brooklyn in the City Council.

De Blasio, who has also recently landed endorsements from President Obama, former President Bill Clinton and former U.S. Secretary of State Hillary Clinton, addressed divides among the city’s Democrats – who outnumber Republicans by about 6:1 – following a roller coaster of a primary that saw the rise and fall of Quinn and former U.S. Rep. Anthony Weiner.

“The first work we have to do is unifying the party,” de Blasio said.

The candidate also emphasized Monday many of the campaign platforms he highlighted during the primary – including access to affordable housing and supporting mom and pop shops.

Saying that outgoing Queens Borough President Helen Marshall has had to fight for – and battle against cuts to – funding from City Hall, the Democratic candidate stressed that “Queens has very particular needs and a mayor has to understand those needs.”

“A mayor has to spend some time here on the ground to understand those needs,” de Blasio said as a verbal slap to Bloomberg, who a number of Queens residents have accused of not spending enough time in the borough – particularly following Hurricane Sandy.

The public advocate also issued harsh words for his Republican opponent, who on Monday called de Blasio a “Democratic socialist” and lambasted him for supporting Nicaraguan revolutionaries in the 1980s – as depicted in a front-page article in Monday’s New York Times – and traveling to Cuba for his honeymoon.

Responding to the Times’ piece on de Blasio’s previous support for Sandinista revolutionaries – leftists who were denounced in the 1980s by the Reagan administration as Communists but who progressives praised for fighting what they said was a repressive Central American dictatorship – Lhota said at a press conference on Monday that his opponent’s political ideology was “unfortunate.”

The Times piece reported on how de Blasio’s time in Nicaragua as a 26-year-old – when he helped to distribute food and medicine to the war-torn nation – went on to shape his own political leanings. After helping the revolutionaries in the 1980s, de Blasio said he has gone on to criticize the Sandinistas for cracking down on dissenters.

In the article, the reporter says de Blasio told individuals in Nicaragua that he backs “Democratic socialism.”

“Quite honestly, there are words that I don’t like to use, but his own words – in his own words – called himself a Democratic socialist,” Lhota said at a press conference outside the United Nations on Monday. “It’s really unfortunate that’s the level that we’ve come to in this city.”

De Blasio did not say at today’s press conference whether or not he had described himself as a Democratic socialist.

“I believe in a more just society,” de Blasio said in response to questions about the article.