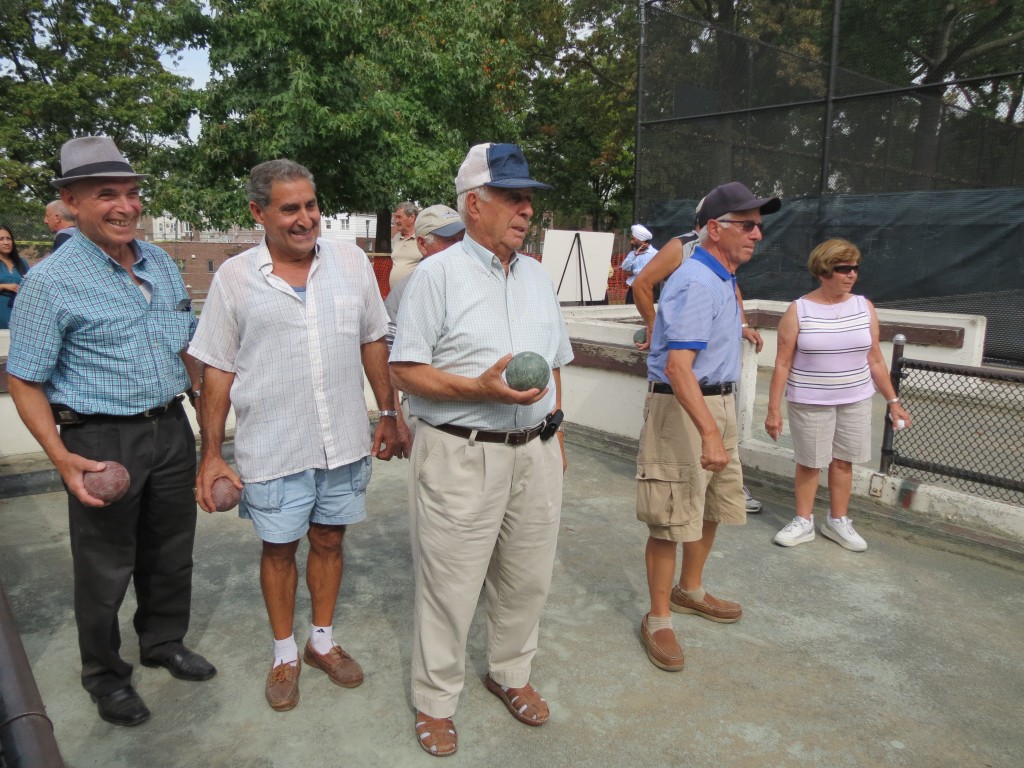 Bocce players from throughout Queens – and beyond – routinely gather at Juniper Valley Park to play the sport that has its roots in the Roman Empire. Anna Gustafson/The Forum Newsgroup

They wake early, some jumping into cars and making the trek from Howard Beach and others leaving the Middle Village homes in which they have lived since moving to Queens from Italy, and, regardless of snow or rain or pretty much anything that may stand in their way, make their way to Juniper Valley Park. There, a group of men – and, often, one woman – spend their days with friends, new and old, playing frequently intense games of bocce – a game that has its roots in the Roman Empire and which is now a favorite pastime in Italy.

For hours, they laugh and, good-naturedly, poke fun at one another. As the hours pass, they order pizza and, while cheering as they throw a ball from one end of the court to the other, find themselves engrossed in the stories that inevitably seep into their days. They speak to one another about family, about sons and daughters who have moved away, about times that seem like other lives in home countries halfway across the globe.

And, when asked, what draws them to the bocce court in Middle Village every day, they will say, simply, “We love it.”

That is why, the bocce players said, they are thrilled that their courts are getting major upgrades – a project for which the groundbreaking was held last Thursday morning.

“Right now, there’s damage here – when it rains, it continues to damage the courts, so we are very happy this will change,” said Paul Mauceli, a Middle Village resident originally from Italy.

Councilwoman Elizabeth Crowley (D-Middle Village) and Borough President Helen Marshall allocated $850,000 for the project that will result in a new bocce court, reconstruct two existing courts, and install shaded areas, benches, tables, and trees. The construction is expected to be completed this spring.

Lewandowski noted that the groundbreaking symbolized the beginning of a “very important project for all of us.”

Rego Park resident Steven Shakarchy, originally from Iran, said the bocce players who congregate daily at Juniper Valley hail from neighborhoods throughout Queens – and even beyond.

“We have people from the Bronx, from Mount Vernon, from Howard Beach,” said Shakarchy, who began playing bocce after seeing a game of it in Corona. “The park is going to be dead when we can’t be at the court – the only thing that’s alive here is the people.”